A group of friends gets ready for the party of a lifetime once their exams are over. The occasion calls for the opportunity to dress up, drink up, and get carried away by summer plans as the stepping stone for the future. The party scales up, and they end up breaking into their school. Blackout. Not the theatre kind. The drunk kind.

END_OF_DOCUMENT_TOKEN_TO_BE_REPLACED

Angus’ dog died last week. Dain was his best friend. It’s like one day it was there, and the next it wasn’t. I mean, nothing is really making much sense lately.

END_OF_DOCUMENT_TOKEN_TO_BE_REPLACED

When Cora Bissett was 17, she joined a band. It’s the stuff of many indie kids’ school days, but Darlingheart found overnight success. They went from tiny venues to opening for the biggest britpop bands in the country in an extraordinarily short time, but their fame was just as short-lived. Bissett’s show, assembled from the diaries she kept as a child and into adulthood, chronicles her rise to fame and subsequent readjustment to real life. Tenacity, banging tunes and engaging storytelling celebrate Bissett’s resilience whilst critiquing the music industry in this vibrant gig-theatre piece.

END_OF_DOCUMENT_TOKEN_TO_BE_REPLACED

The Paines Plough Roundabout is the most reliable, new writing venues at the fringe. With a collection of work that represents the width and breadth of the UK both geographically and thematically, this year’s offerings are universally strong. From a family musical to a one-man show about a stalker, and everything in between, there is a great selection of shows for audiences looking for new work in a great venue that tours around Britain.

END_OF_DOCUMENT_TOKEN_TO_BE_REPLACED

“A place of random defecation.” That sums up London pretty well, tbh. But not this production.

END_OF_DOCUMENT_TOKEN_TO_BE_REPLACED

Two men pelting it down Princes Street in Edinburgh as a voiceover lists the goals of typical adult life – big tellys, cars, careers – is one of the most iconic moments in British cinema. Ranked tenth by the BFI in its 1999 evaluation of best British films, Trainspotting has left an indelible mark on popular culture.

END_OF_DOCUMENT_TOKEN_TO_BE_REPLACED

Rape culture is real. Victims are blamed, perpetrators are excused and conviction rates are low. Of reported rapes – estimated to be less than 20% – only 3% are deemed to be false accusations.

END_OF_DOCUMENT_TOKEN_TO_BE_REPLACED 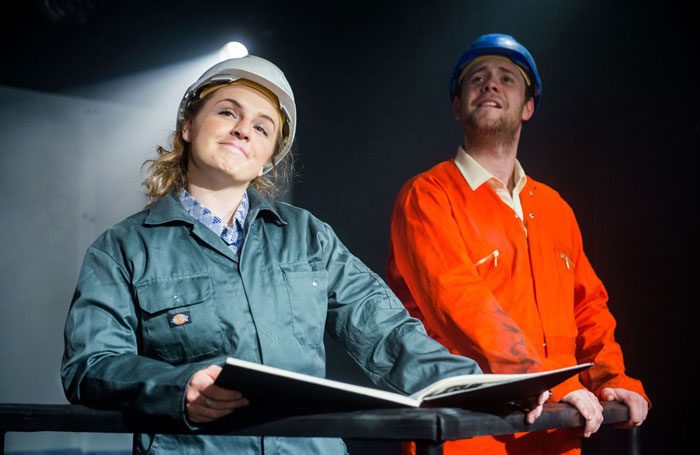 Peppered across the North Sea, giant metal birds stretch towards the sky and drill into the seabed below, hunting for life-giving oils and gasses. Along their wide bellies, men work day and night to keep them moving in dangerous, dirty conditions. The money’s good, and the work is plentiful.

END_OF_DOCUMENT_TOKEN_TO_BE_REPLACED

Deep in working class Scotland where you’re a celebrity if Poundland invites you to open their newest store and Buckfast is the drink of choice, bullied Lardo desperately wants a regular spot on The Depot’s “Tartan Wrestling Madness” bill. He has aspired towards this since he was a kid, wanting to live up to his dad who died in the ring. Lardo is also a youtuber, a call centre worker and not coping well with his girlfriend Kelly’s revelation of her pregnancy. Event promoter and producer Gavin Stairs takes a shine to the supposedly fearless, pudgy Lardo and gives him a chance but Stairs is not the sort of person to give anything away for free.

Daniel Buckley plays Lardo as a wide-eyed, immature escapist with pathos and enthusiasm, like a well intentioned but hapless pantomime hero. Nick Karimi’s Stairs is a fitting villain, a failed wrestler refusing to let go of his past glories and grudges. Pushing the limits of health and safety regulations and the boundaries of inspector Cassie (Rebecca Pownall), Stairs wants to bring real violence into the ring. There is an undercurrent of danger in him, foreshadowing a violent end. Zoe Hunter plays Mary (who moonlights as hard as nails Whiplash), a single mother trying to get by and do the right thing. Wrestling director Henry Devas’ choreography captures the theatricality of pro wrestling, which all of the performers embraced eagerly and executed skilfully.

During the wrestling matches in the ring that takes up most of the pub theatre stage, the characters interact directly with the audience and encourage them to cheer, shout and root for their favourite. Part pantomime and part live sporting event, the fights blend these forms of theatre, pulling the audience into a meta-theatricality where actors play characters who play more exaggerated characters in the ring. Just as Lardo, Mary and Stairs transform into a heightened Lardo, Whiplash and Heartbreaker to escape the misery of daily life in their weekly wrestling nights, the audience are pulled out of their reality as people watching a play and become spectators of a wrestling match in Scotland. It is rather like living inside their heads, seeing the otherwise-guarded fantasies instead displayed under the bright lights of a dingy wrestling club. The audience also sees some of the wrestlers’ rehearsals. Like rehearsals for a play, these scenes come across as intimate moments that are a privilege to witness.

This is writer Mike Stone’s first full length play and it is an excellent start. Lardo uses an array of theatrical and cultural influences to expose the inner life of the characters, but more depth would not go amiss in the characters’ real lives and relationships. A couple of jumps forward in time created ambiguity and suspense but additional clarity would be welcome and would not have to reveal the missing action. The characters’ need to escape is one we all can relate to, so the audience willingly plays pretend with the characters.

This is a wonderfully fun play, with genuine belly laughs as well as moments of exposed, raw pain that have the ability to slide the audience along a spectrum of feelings. There is certainly scope to develop these characters more and the play would work well in a larger theatre, where the ring is a separate set element rather than the set itself. This production gives insight into an often-troubled world desperate for a distraction and temporary escape, even if it means risking life and limb to do so.