Theatre Peckham’s Artistic Director Suzann McLean hits the target as she notes that …cake is a bold new play which honours intersectionality. Written by babirye bukilwa and directed by malakaï sargeant, this two-hander drama pulls away from the myth of neatly defined tropes regarding gender identities, roots, class and relationships, and sets out to explore the complexities of stepping out of a familial cocoon that shifts from warm to flaming.

END_OF_DOCUMENT_TOKEN_TO_BE_REPLACED

The Royal Shakespeare Company flung open their locked playhouse doors with a new project that engaged audiences in a socially distanced but immersive manner: they put the making process of a play online for anyone to watch. From 1- 13 June, audiences (or rather Vimeo viewers) could join the cast and creatives of Henry VI Part One every weekday for live streams of the company’s morning physical and voice warm-ups, lunchtime rehearsals, and evening green rooms that answered audience questions and allowed the team to expand on their crafts, normally kept behind the scenes. All the live streams were available to watch until 25 June. If uncovering a rehearsal process doesn’t sound unconventional enough, the show did not hit the stage boards. Instead, the final performance consisted of a live-streamed, rehearsal room run-through from the RSC’s Ashcroft Room on 23 June.

END_OF_DOCUMENT_TOKEN_TO_BE_REPLACED

Women’s anger is often expected to be suppressed or contained rather than be unleashed on the world. Otherwise, we risk being labelled ‘crazy’ or ‘a bitch’, no matter what injustice we experience. But Femi can’t hold it in anymore. The night before the group of white men who killed her killed her brother Seun on Margate’s beach face charges of manslaughter, his ghost visits her to share the truth of his death. Initially baffled by her dead brother’s appearance, she is transformed into an embodied fury that cannot and will not stop until she gets revenge.

END_OF_DOCUMENT_TOKEN_TO_BE_REPLACED

Everyday life isn’t often a particularly generative setting for compelling storytelling, but the many hospital dramas out there show that medicine is an exception. Though they aren’t part of most people’s daily routines, they are for the nurses who work in them. Long, exhausting shifts are dictated by the rhythms of their rounds, but these are punctuated by literal life-or-death crises. Amidst the moments of high drama, there are series of small, precise actions that keep patients safe and looked after. It’s in these little moments that this physical theatre collage excels.

END_OF_DOCUMENT_TOKEN_TO_BE_REPLACED

Making a show political without feeling like a rant is a tough nut to crack; too much seriousness and you’re the news, not enough and you look misguided. The company Papergang Theatre make it look easy. They’ve incorporated just about every performance medium: dance poetry, lecture, video. This is proof that less is not always more.

END_OF_DOCUMENT_TOKEN_TO_BE_REPLACED

This is the first preview performance of a one-man show following Jacob, a young man trying to turn over a new leaf away from his previous life as a hard-living and loving party animal. He’s doing this through Jesus and focusing on his education. He is, however, finding this difficult due to constant interruptions from his friends and ex-girlfriends whilst he is trying to finish an assignment.

END_OF_DOCUMENT_TOKEN_TO_BE_REPLACED 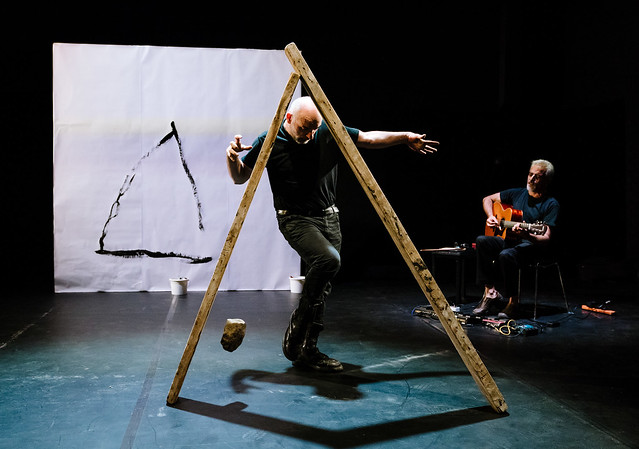 Accompanying the first performance of Thibault Delferiere’s trilogy (directed by Jack McNamara), is a side of A4 paper containing three quotes from Nietzsche. They depict a journey through three transmutations: the spirit as camel, the spirit as lion, the spirit as baby. Like the camel, the spirit desires to burden itself and takes on heavy loads. Once laden it transforms into a lion – where it’s power and destructiveness can create the space for the new. And in that space, the baby emerges –  wide-eyed and forgetful, the spirit can now create unencumbered. That is the journey that the trilogy promises to traverse.

END_OF_DOCUMENT_TOKEN_TO_BE_REPLACED Six young actors, maybe friends or maybe strangers, are stuck. They greet us when we enter and they are kind, but they do look a bit lost. They take turns to share important memories from their childhood, which sometimes fall out as fairytales or pop songs. Fragments of innocent childhoods which have slipped through fingers.

END_OF_DOCUMENT_TOKEN_TO_BE_REPLACED

How do you cope when the promise of the West turns out to be a city in the midst of a housing crisis, and you’re only one pay check away from homelessness? A.A. (Danaja Wass) doesn’t really know.