The main stage at Ovalhouse isn’t there anymore. Neither is the floor beneath it or the concrete foundations below, but there is a hole, and a lot of yellowish dirt. Emma Frankland and other four trans and nonbinary artists are energetically digging it, searching for relics and memories of their trans family that preceded them. They also dance, tell stories and share their fears and hopes for the future in this vulnerable and celebratory performance piece on trans identity and lived experience.

END_OF_DOCUMENT_TOKEN_TO_BE_REPLACED

I’d never considered hair salons to be the domain of estranged, murderous sisters, but this contemporary, actor-muso update of Snow White shows a darker underbelly of this normally jolly place. At the Happy Ever After salon, Trish has built a beauty empire that she rules with an iron fist, toxic pomades and razor sharp scissors. Punctuated by original vintage-style tunes, puppetry and engaging performances, this show is a sophisticated pantomime that’s diverse, accessible and fun.

END_OF_DOCUMENT_TOKEN_TO_BE_REPLACED

The Dark is an exhilarating and personal journey through the dusty backroads of Uganda in 1979. Jumping between then and present day, Michael Balogun tenderly tells author Nick Makoha’s story of how he and his mother escaped the terror of Ugandan dictator Idi Amin’s reign and crossed the border heading for the UK when he was four years old.

END_OF_DOCUMENT_TOKEN_TO_BE_REPLACED

Rumi (Kuran Dohil) is a Muslim atheist, having to hide huge chunks of her life from her family. Including her new, white, non-Muslim boyfriend, Simon. What could possibly go wrong?

Coconut is one of those plays where each person who watches it will take away or resonate with something different, for me it was the role religion plays in our lives.

END_OF_DOCUMENT_TOKEN_TO_BE_REPLACED

Two months in, and already ‘gaslighting’ appears to be the word of the year. Both Trump and Weinstein, who are often cast as toxically masculine villains in the press, have been accused of implementing such misdirection and manipulation toward their female accusers.

END_OF_DOCUMENT_TOKEN_TO_BE_REPLACED

Phina Oruche has had an extraordinary career. Growing up in Liverpool to Nigerian parents and desperately wanting to see more of the world, she let her best friend Amy talk her into doing a modelling photoshoot as a teenager. Soon she found herself living and working in London, then New York and LA. Eventually tiring of the high fashion world and feeling the pull of her home, she moved back to the UK where he career led her firmly into the film and telly world. Now a mum and conflicted about the cultural pushing and pulling on her life, she examines who she really is the self-penned Identity Crisis. The punchy tapestry of characters and experiences has messy and confusing moments and no clear resolution or story, but it’s brimming with heart and life.

END_OF_DOCUMENT_TOKEN_TO_BE_REPLACED

Scarlet and Olive were left behind when the evacuation transport left their town without them. A dust storm has rendered their home a foreign landscape. They have five days until the transport will return to collect any stragglers, and news is due over the radio at any time between now the then. The resourceful young women must work together to find water and build a shelter so they can survive until someone comes back to get them, and the audience of people with profound and multiple learning difficulties (PMLD) is there to help.

END_OF_DOCUMENT_TOKEN_TO_BE_REPLACED

HOPE: A feeling of expectation and desire for something to happen.

How do we cope when we don’t get what we want? How do we beat a system that is set up to make you fail? Custody asks just these questions, as we are taken on a two-year journey of a family’s struggle for justice for their loved one, twenty-nine year old Brian, who died whilst in police custody. Through this eighty-minute narrative, we see four different individuals cope/hope, whilst their questions are left unanswered.

END_OF_DOCUMENT_TOKEN_TO_BE_REPLACED

Along with tickets, we are handed earplugs. Considering Christopher Brett Bailey’s first work This Is How We Die, I’m not surprised. A brilliant, relentless barrage of contemporary American myth followed by an encore of noise and light, Bailey isn’t known for doing things by halves, or even singular wholes. The slight, constantly startled-looking Canadian with gravity defying hair attacks performance making with the energy of a supernova. Kissing the Shotgun Goodnight has the same verve, but is otherwise a rather different beast. Whilst This Is How We Die was dominated by language, Kissing the Shotgun Goodnight has very few words – but the earplugs are definitely needed. This anthemic music and light show fills the room with sound, colour and vibration but is the difficult second album to This Is How We Die. Much more of a gig than a piece of theatre, it lacks the satisfaction of characters and narrative, even a hint of one. Bailey’s mind blowing poetry teases with a few tiny fragments, but otherwise leaves us desperately gagging for more of his words.

Though given earplugs, there is the choice of whether or not to use them. Notices state that the sound level is consistently over 100 decibels and that, “if you wear plugs the whole time you might compromise enjoyment of the show. and if you don’t wear them at all you will take home whistling ear canals”. Being one of those people sensitive to loud noises who constantly asks my other half to turn down the telly, I want to play it safe but I don’t want to miss out. So I opt for one plug in, with the other ready. This choice no doubt effects the experience – if I leave them out the whole time and feel discomfort, would I like the show less? Or would I like it more because it’s not actually ‘that’ loud? I use the plugs in response to the volume level – sometimes I have both in, sometimes none. It’s an interesting premise to consider that the experience and quality of the show hinges on these earplugs, adding an additional level of individual, subjective response.

Bailey’s voice, slow and unseen, repeats, “this is a hell dream” in a brief textual introduction. Violinist Alicia Jane Turner uses loop pedals to sculpt a cinematic score reminiscent of mid-90s rock anthems. Her work is wonderfully angry, sweeping and alive. George Percy and Bailey are both on guitar, forming a silhouetted triptych with Bailey soon in the middle – amongst the monolithic speakers and flight cases forming a brutalist, urban landscape, he cuts the figure of a scrappy dystopian overlord. It suits him. If this is what hell is like, it’s fucking glorious.

Behind each performer is a wooden panel of about a metre square made of deconstructed pianos and their strings. These are visually impressive structures in and of themselves; their music evokes the violence and community of tribalism. Combined with excellent sound-responsive lighting (that malfunctioned to the point that the show needing to be stopped briefly), the overall effect is one of epic, soul shaking community.

The title paired with the music evokes the American paradox of a friendly but violent people who love their guns as much as their families. The music’s scale captures the expanse and variation of the North American landscape, and the few words he shares on the experience of waking up from a nightmare to find the world unchanged darkly foreshadow Trump’s America. Whether or not this is an intentional message, it is certainly a powerful one.

Kissing the Shotgun Goodnight is certainly wide open to interpretation and shows Bailey’s ambition and range as a performer of work designed to push the senses to their extremes. His textual dexterity is certainly missed (particularly by the coked up, flailing pair of young women sat next to me commenting on how disappointing this work is compared to his first) and comparatively this piece is somewhat disappointing, but it absolutely has its merits as a visceral, “fuck you/I love you” performance piece. 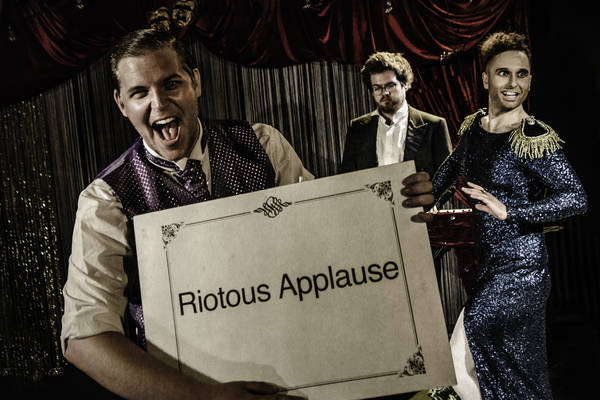 British history is peppered with truly remarkable people. Kings, queens, writers, actors, scientists, athletes and military generals pepper school history books and cultural subconscious. Then there are the people like Henry Paget, fifth Marquis of Anglesey, who are largely forgotten, tucked away in the centuries-old folds of this country’s past. During his brief Victorian life, he became rather infamous for cross-dressing, blowing his family fortune, and turning the chapel of his estate into a 150-seat theatre where he played the leads in his own productions with which he later toured Britain and Europe.

Seiriol Davies’ How to Win Against History chronicles (and fictionalises parts) of Henry’s radical life, focusing on his theatre work and cross dressing, as a fabulous, form-bending cabaret/musical. This little show has a huge heart and needs further script development to smooth out the lumpy narrative, but sequins and silliness, destroying the fourth wall, clowning and contemporary political commentary makes for a powerfully subversive and hilarious production.

The lengthy introduction provides necessary exposition, but as it gives way to a song that focuses on the Marquis’ time at Eton, it becomes too long. The interesting plot points come once the character is of age, and these deserve more attention than they are given. The beginning also sets up the style that’s maintained throughout, of musical theatre songs punctuating scenes that are heavy on the sort of narration and banter that is found in cabaret and drag acts. It’s a wonderful act of genre smashing. Musical theatre, cabaret, vaudeville and pantomime make an engaging, energizing combination that fosters audience participation and celebration. If this is where popular theatre is heading, then bring it on – Seiriol Davies’ script is at the forefront of musical theatre innovation.

Once young Henry finishes school, action starts to pick up. After a mutually beneficial marriage to his cousin (that was reportedly never consummated) and teaming up with a actor Alexander Keith (Matthew Blake), he casts himself in several plays. When no one comes, they take the shows on the road, making hilarious changes as the audience becomes less enamored of his work. More could be made out of his marriage and his increasingly weird theatre productions; they are rushed and little sense of a timescale is provided. Between his awakening as a student to a touring theatre maker, there’s a feeling that a lot of plot is missing. He is suddenly a broken man in Monte Carlo being interviewed by Daily Mail journalist Quentin (a brilliant in-joke!) and whilst this is deliciously funny, there is yet another leap in time and place. More scenes could easily be written to fill in these gaps without disrupting the established style. Even though the cabaret influence comes though in the short sketch-like scenes, as a musical it feels underwritten.

Writer Seiriol Davies plays Henry, the fabulously flamboyant lover of sequined dresses and the theatre. His journey from naïve boy to the ill and impoverished 20-something is lovely and genuine, with songs that in turn capture his enthusiasm and anguish. Energy abounds from the other two performers, making the show feel a lot bigger than it actually is.

Though this new musical needs further development to give it the scale and narrative punch that matches the style, it is fantastically good fun. The political content and deconstructing of style and structure are fly in the face of historical erasure of controversial figures and dramatic conventions. But it evoked engagement and contribution from a willing audience that was eating out of the performers’ hands within the first few minutes and this in and of itself is a huge indicator of excellent work. How to Win Against History could easily have the scale of a West End show, and it deserves the attention that would garner it.

How to Win Against History runs through 28 August in London and Edinburgh.