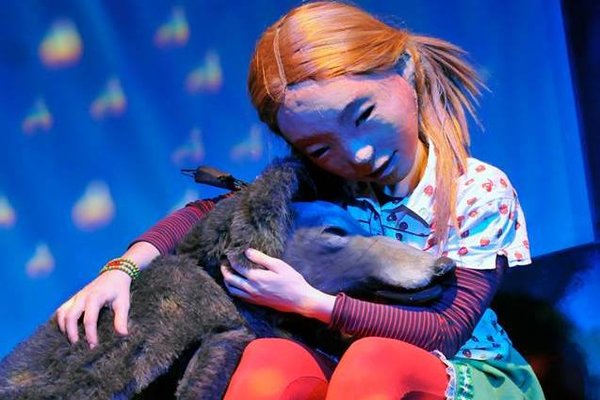 What makes the story of Red Riding Hood so enduring? Is it the clever heroine? Is it the metaphor for growing up? Is it the violence and gore? Horse & Bamboo choose to focus on the colour red and its symbolism in their touring Red Riding Hood. Two actors, Nix Wood and Alex Kanefsky, are actor-storytellers-puppeteers who endow the story with a richness and life that appeals to their young audience as well as their families. The company’s lo-fi touring aesthetic uses a surprising amount of puppets at different sizes, masks and costume to keep the kids’ attention. It’s a bit hodgepodge on the surface but there’s a good amount of layers to this piece: meta theatre, storytelling, playing at the characters, and embodying them. Wood and Kanefsky fluidly switch between the styles that initially feel excessive in their quantity, but the children are so absorbed in the story that cannot be deemed as anything but highly effective and engaging.

The main focus of the story is the dynamic between Red and the Wolf. Mum and Grandma make appearances, but they don’t waste any time getting to the woods. The deeper Red gets, the larger the characters become – a great device. Initially, a tiny Red and mum are reading bedtime stories in a dolls’ house, eventually Wood plays Red in a full mask and the wolf is a nearly life-sized puppet with excellent movement and expression in the head and neck. Music and animated projections add additional detail to Wood’s controlled, emotional physicality communicating the unspeaking Red’s inner life. The wolf and Red focus results in a reinforcement of the “don’t trust strangers particularly if they seem nice” moral, which works for a children’s show but is quite a shallow interpretation in a production that has such depths of performance technique and style.

Red’s cloak is a dark, rich red that stands out beautifully against the rest of the set. Wood sets up red as her favourite colour as she chats with the entering audience pre-show; it’s lovely to watch. Kanefsky is goofy and warm, and loves cakes. This trait follows his characters through the rest of the story. The set is made of abstract blues and greens, inspired by Paul Klee’s art (my initial association was with Kandinsky’s work). Though the idea of starting with visual art for a way into a concept is a common one, the abstract set design clashes with the concrete realism of the puppets and mask, and the animation style was the starkness of shadow puppetry.

As children’s theatre goes, Horse & Bamboo’s Red Riding Hood is more sophisticated than it appears. Despite the moralizing, the craftsmanship and performance skill can be appreciated and enjoyed by all ages. Knowing that Horse & Bamboo are a touring company with just two actors makes their work all the more impressive. An excellent production for families at any time of year, too.