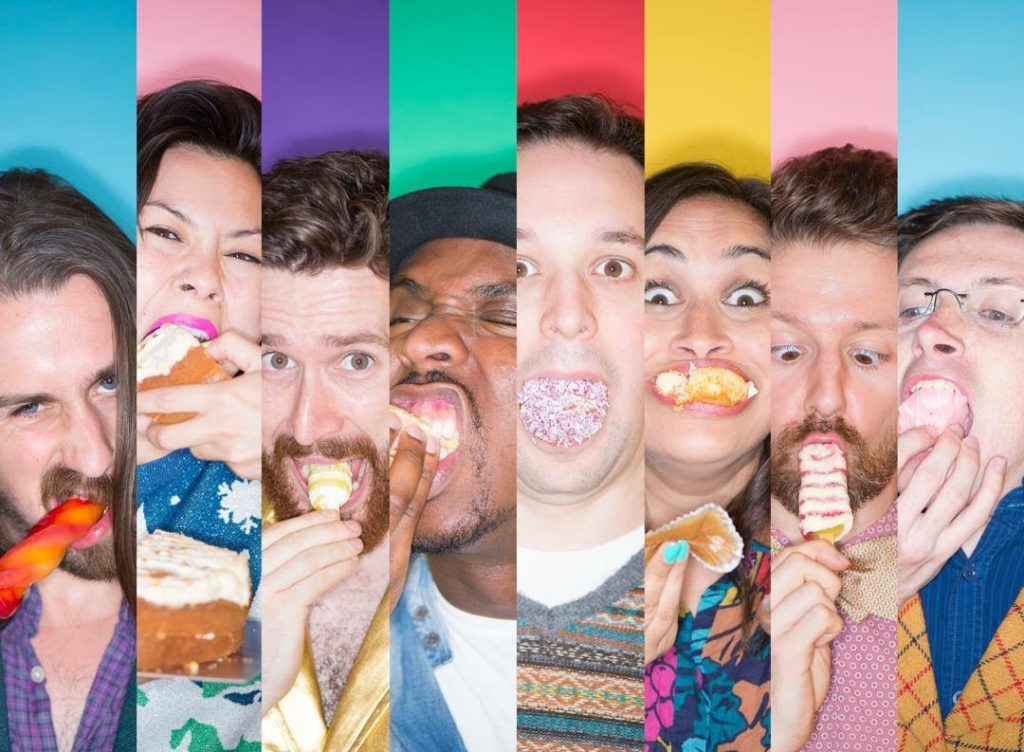 [A]n age-old improvising exercise is the one where two players perform a scene in which each line begins with the next sequential letter of the alphabet.

Instead, here’s what happened on the night I saw them. In alphabetical order.

[C]olin the Caterpillar cake just got brought on! What a national treasure! Trigger warning: he does not survive. It’s player Anna Leong-Brophy’s birthday and she’s been challenged to eat an entire Colin. I am jealous, and a little sickened.

[D]one a sneaky Google search, and there are 2,760‬ calories in a Colin. I am firmly against calorie counting, but blimey. Heartburn.

[E]nglish Actor Denise van Outen might be offended by Brendan Murphy’s characterisation of her. All those years learning to dance and he’s portraying her as a sassy sort of…

[G]od, I’ve just messed this up because flamingos just featured, and I’ve just used my F. This is hard.

[H]osting the evening is Oliver Izod. He is very shouty, but in a funny way. He smells very strongly of sandalwood, which is nice. His aesthetic is a cross between Laurence Llewelyn Bowen in his ‘Changing Rooms’ days and the rabbit from Alice in Wonderland. It works!

[I] hope the Colin thing isn’t a spoiler. I don’t think they can do this to someone every night. Anna’s halfway through already. Hero.

[J]ust realised that one of the players (Chris Eastwood) used to teach me Bodybalance™. Like yoga, tai chi and Pilates thrown together and then you take a nap at the end whilst you’re told everything’s going to be okay in a soothing voice. He’s great at improv!

[K]iell Smith-Bynoe, a player, has such a beautiful smile. He’s left the auditorium so the audience can come up with scenarios for the players that he will have to guess.

[L]andscape legend Alan Titchmarsh is going to be murdering someone by bashing them to death with a bible. He’s never going to guess this.

[N]ow they’re coming up with jokes on the spot. Most of them are alright.

[O]ne hundred and eighty-seven accountants walks into a bar and count how many bottles of spirits are there. They do a shelf assessment.

[P]retty mortified that the only verb I could think to contribute was ‘RUN!’ when the audience are asked for a prompt. Oliver’s eyes meet mine fleetingly. He is disgusted and asks me to leave. I am a disgrace to their art.

[Q]uite obviously, he did not ask me to leave.

[R]ude back row shout out very lewd suggestions. It’s a 9pm show so half the audience are a bit beery. In a good way.

[S]lough doesn’t fare well in this show. Where is Slough?

[T]he caterpillar cake is nearly gone. I repeat, the CATERPILLAR CAKE HAS NEARLY GONE. GIVE ANNA A TROPHY. I hope she doesn’t feel too sick to enjoy the rest of her birthday night.

[U]nusual way to spend a Friday night, this. Emily Lloyd Saini just failed to identify that Anna was trying to mime Tic Tacs to her, and Oliver absolutely lost it: ‘SHE’S TRYING TO GET YOU TO SAY TIC TACS!’.

[V]aults smells like pee. But we love it anyway.

[W]eirder than the presence of my ex-Bodybalance™ teacher is that I just remembered he is married to someone who was in an amateur dramatics group I used to go to. Small world. N.b to Editor: is this a conflict of interest? I’ve technically taken a nap with this guy?*

[Y]ou should see this group.

[Z]ebra. The saving grace of improv. If in doubt, Zebra. When you need a Z, Zebra.

*Editor’s Note: The Play’s the Thing UK does not regulate its critics’ napping choices.