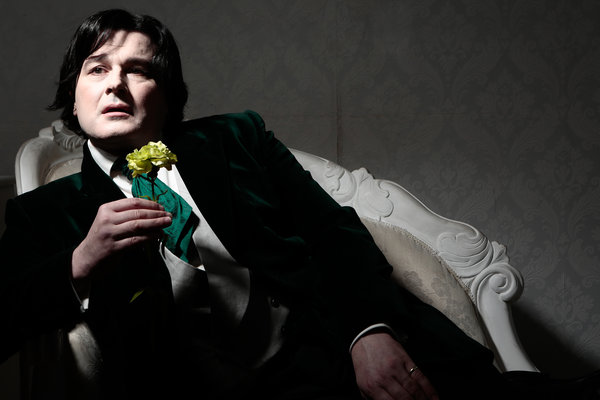 Near the end of his two-year imprisonment for gross indecency, Oscar Wilde was a man broken from hard labour, isolation and social disgrace. Until a sympathetic warden at Reading Gaol allowed him restricted writing privileges, he hadn’t been able to write at all. Provided with a single sheet of paper that would be collected and replaced when that one was filled, Wilde penned an 80-page letter of 50,000 words to the selfish lover who was his downfall, Lord Alfred ‘Bosie’ Douglas. Heavily edited and published posthumously by Wilde’s friend and former lover Robbie Ross, the chatty letter was titled “De Profundis”. After Wilde’s release, he wrote poem “The Ballad of Reading Gaol” whilst exiled in Paris; this work details the execution of a fellow inmate.

In Wilde Without the Boy/The Ballad of Reading Gaol, actor Gerard Logan and director/writer Gareth Armstrong team up to create a staged version of these two narratives as a one-man show in two acts. Dramatic in structure and reasonably well performed, this is a text-heavy piece that suits the intimate Rose Playhouse. However, the consistent, even tone and pace that Logan employs has a lulling effect and the verbosity overwhelms with details. There is little to watch; though Wilde Without the Boy gives insight into Wilde’s state of mind at this challenging point in his life, it would make more sense as an audio recording and I cannot discern why it was put on the stage. The Ballad of Reading Gaol is performed with more vocal and physical variation so even though it is the shorter part of the event, it is the more compelling piece.

The set is simple: a bare table and two chairs for the first act, with a stack of documents that are occasionally referenced as letters. The red rope lighting that outlines the Rose’s archaeological remains casts a faint red glow on the walls reminiscent of the passion and anger that constantly burns in Wilde’s heart. Whether or not this was intentional, it effectively contributes to the heavy mood of both pieces. In the second piece, the table is covered with summer linen and a sole green carnation rests there. It is another powerful symbol of Wilde’s homosexuality that is repeatedly denied in Wilde Without the Boy. This show completely ignores the vast space beyond the stage, a decision that suits the script, but it’s still a shame to neglect such a unique feature. The musical score, intermittent in Wilde Without the Boy but a constant presence in The Ballad of Reading Gaol, is latterly a character in itself and Logan’s delivery is impeccably timed to its rise and fall. No programme was supplied, but whoever designed or composed this score deserves acknowledgement.

Though both are interesting pieces of text in that they aren’t normally performed or read by anyone other that Wilde enthusiasts or students, their theatrical potential is limited. Even with Armstrong’s adaptation and edit of the letter, as a one-person show it’s still more of a recitation with a thin story arc detailing Wilde’s views of Bosie and his experiences in prison. Logan has some lovely emotional moments, but it’s not enough to keep the mind from drifting. The Ballad of Reading Gaol has an actual storyline, which is an immense boost to Logan’s performance. He has a compelling stage present and vocal agility, but Wilde Without the Boy is not the best showcase of his abilities, the Rose as a venue or theatre itself.