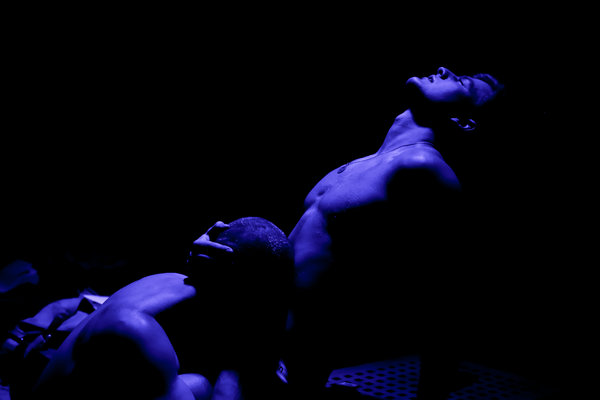 Schnitzler’s La Ronde has been remade dozens of times and might be coming back into fashion again, what with the recent Hope Theatre production of Hello Again. Joe DiPietro’s Fucking Men follows Schnitzler’s format but sets the 2008 story in gay New York. The show also has the distinction of being the longest running show on the London fringe beginning with it’s 2008 Finborough run and followed by several transfers and extensions. After a brief break, it’s back at The King’s Head. At an hour long, three actors play all ten characters in ten brief scenes, too brief for much character development (with a few exceptions), but an effective snapshot of the ability sex has to cut across social groups.

Performances vary with the character, but the actors’ energy and commitment is consistent. Richard De Lisle excels as the other married guy and the journalist, the latter particularly moving. Harper James entertains as the enthusiastic “straight” soldier who likes to fuck guys and has a satisfying character journey that we see though the adorably sweet Hayden Whiteside as the escort. The short scenes lend themselves to stereotypical performances that are tough to fight against; this is a play that could definitely do with lengthening.

The small stage and Jamie Simmons’ universal set pieces are used well but some of the transitions take too long. His costumes give good character identification, important in scenes that aren’t long enough to have much exposition. Mark Barford’s direction is conservatively sexy: there’s a changing room scene with full frontal, but that’s it. Otherwise, all bits are covered at least with pants, with a bit of bum here and there. A bit more nudity wouldn’t be gratuitous, but neither is it necessary, either.

Despite the sex, this play is about the immediacy of relationships formed in passing encounters and the loneliness they can embody. The LGBT vehicle brings up issues more common in the gay scene (like monogamy and HIV), the overriding desperation for human contact transcends gender and sexuality.

This is a tender, fun production that deserves development and a good counterpoint to the camp Mirror Mirror: A Snow White Pantomime on earlier in the evening. Though not explicitly seasonal, Fucking Men is an important reminder that even during the holidays, some people are still lonely and desperate for even the most fleeting of human contact regardless of how comfortable their lives may be otherwise.