Henry (Henry Madd) has always found it easier to tell other people’s stories rather than his own. So that’s what he does in The Land of Lost Content where he turns the Pleasance Downstairs into his hometown Dulowl. As part of the Vault Festival transfer season, the show lays out the growing pains in the hearts and bodies of a group of mates that grew up in this little village that happens to rhyme with ‘dull’. Harry’s old friend Jake (Darragh Hand), who now sees him as a somewhat disloyal outsider, welcomes him at the local pub. Pint after pint, they engage with vivid memories from the old days
before Henry moved away. As he tells us, their real-world adventures come nowhere close to the coming-of-age glory promised by movies.

END_OF_DOCUMENT_TOKEN_TO_BE_REPLACED

A two-person comedy about kids and foot and mouth disease doesn’t necessarily sound like the most appealing prospect. Don’t let that put you off. Bobby and Amy is a stunning portrayal of the strength of humans, community and friendship, with incredible performances from its talented leads.

END_OF_DOCUMENT_TOKEN_TO_BE_REPLACED

Paines Plough’s flatpackable Roundabout theatre is one of the most exciting new writing venues of the fringe. Tucked in the rear courtyard at Summerhall, the intimate, domed space features several plays spotlighting Britain’s working class this year. From Scottish school gates to a Yorkshire village, the best writing here this fringe wrenches theatre’s narratives away from the privileged classes.

END_OF_DOCUMENT_TOKEN_TO_BE_REPLACED 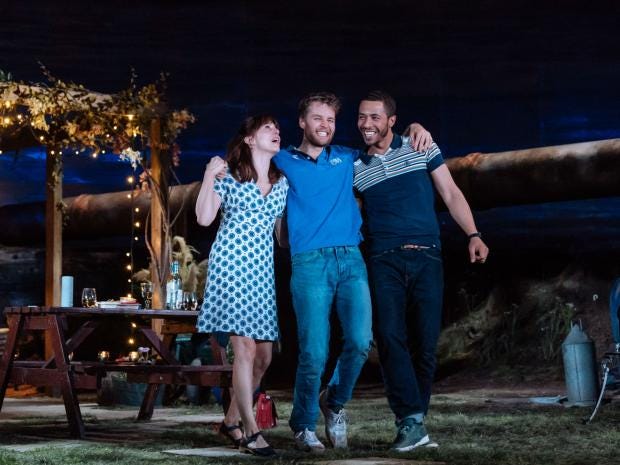 Grief is debilitating. The pain and emptiness can be so paralysing that the prospect of doing anything at all feels impossible. For the family in Barney Norris’s new play, they have lived in stasis for the better part of two years following the death of their patriarch. Isolated in rural Hampshire on a farm burdened with extensive debt, mum Jenny soaks herself with wine and ignores the red-topped bills. Her son Ryan, the farm’s inheritor, tries to keep things running whilst daughter Lou is a construction company receptionist longing to escape. Days pass, identical to those before. Unfortunately, much of the script matches the lack of movement of this family’s existence.

END_OF_DOCUMENT_TOKEN_TO_BE_REPLACED

A newborn lamb lies on the ground. It’s dead. It’s mother will soon follow, but there are others that are still alive or yet to be born, and they need help. Bec and Anna fight for the survival of these tiny creatures as if their lives depend on it.

END_OF_DOCUMENT_TOKEN_TO_BE_REPLACED

A couple wrestle each other with all the affection and aggression that only a couple who have been together for a long time can. It’s tender, brutal, unrestrained and familiar. They each know exactly what the other will do next, and how to wind them up. But it will soon end, as one of them has to leave soon.

END_OF_DOCUMENT_TOKEN_TO_BE_REPLACED

As picturesque as agrarian life may be with it’s rustic farmhouses, sweeping land and livestock, it is not an easy one for older and younger generations who just want to make a decent living. Faded and weather worn, Sam looks after his horses as he’s done his whole life; the younger Jim is all bouncy, boyish banter. The two clearly have much affection for each other in this emotive story of a tragic hero’s fall. But Daniel Foxsmith’s Weald, though full of poetry, passion and the ability to find the audience’s raw nerves, at just over an hour it sells itself short and lacks the sweat and earthiness of farm labour.

Sam (David Crellin) and Jim (Dan Parr) spend most of their time in a barn surrounded by riding tack and looking after horses. Though everything seems well, dramatic revelations are eventually confessed, bringing fiery conflict between the two. Crellin and Parr’s performances are exemplary, with emotional journeys that are the kind actors dream of. They both relish Foxsmith’s rich language and have a wonderfully watchable presence. Their character journeys feel rushed, though; this is wholly down to the script. It’s too short to justify Sam’s final, sudden deterioration that harks of Shakespeare’s Henry V should he have failed at Agincourt.

Bryony Shanahan’s direction taps into the poetic and powerful heart of the script that addresses coming to terms with personal failure, life choices and platonic male relationships that span decades. Her regular use of the audience space shows this is a story that won’t be contained. Though a masculine play, it’s still accessible to female audience members what with the themes that transcend gender. As a failed actor having to adapt to a new and totally unplanned for life, Sam’s struggles particularly resonate and left me feeling exposed and vulnerable, but the grit endemic to farming is glaringly absent. Linguistically heady, Weald lacks a visceral-ness. Even Sam’s final actions when faced with his own ruin are stylised, distancing the audience from the characters’ emotional life.

This is still a beautiful play with fine performances and painfully relevant to present day economic uncertainty, but it’s a sanitised version of real life. Though Sam and Jim mock the wealthy city family that bought the farm house, covering it in solar panels and driving a spotless Range Rover, their daily routine as depicted in the script bears more resemblance to the unseen city man with his shiny wellies than the true life of yard workers.