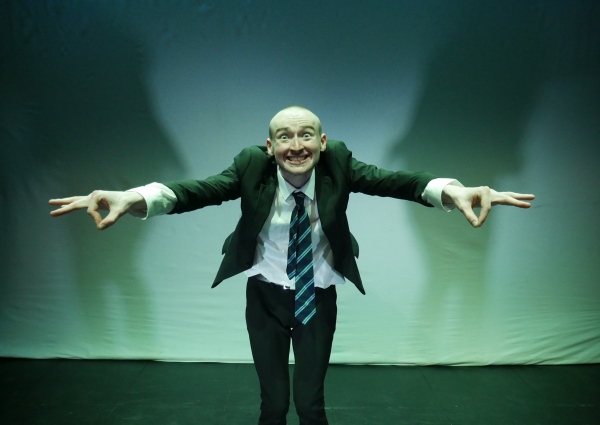 No words, no set, one man and one chair. Using soundscape, lighting and actor James Cross’ elastic limbs, Theatre Imaginers have created an innovative physical performance of a man’s disorientating journey through an overwhelming city.

Cross has perfected physical comedy. From literally losing his head during an altercation on a busy train, to creating the tallest clean glassware pyramid in record time, Cross’ sound effects and cartoonish expressions and gestures will have you laughing out loud.

There is a programme on every seat with the scene order. Most of the time the performance clearly shows exactly where Cross is and what he’s doing, even if it’s as bizarre as him locating a Gregorian choir in a man’s bathroom. In some ways Scenes from an Urban Gothic follows a linear structure: a man leaves his rural home to travel to the big city and find work. But the penultimate piece is certainly more of a stand-alone tale, which is a little jarring at first glance. One particularly beautiful scene is ‘The Tower’ as Cross climbs a never ending bell tower with increasingly small doors. The tolling bell, bright orange circles projected onto the floor, and Cross’ endless climb is near hypnotic.

The Cavern itself is a stunning space – it’s enormous, with a mysterious open door way at the back and water dripping down the walls. It’s no wonder that Cross and director Des Truscott want to use the whole of the room. This only causes an issue during one of the final and most surreal scenes of the piece, where Cross is shovelling something through the growling, fiery door –  he’s just a little too far away from the audience. During the rest of the story there’s a real sense of claustrophobia for Cross’s character and the closeness between actor and audience helps enforce that. But mostly it’s difficult to see what is actually happening, and that’s such a shame because the lighting, noise and what we can see of Cross conjure up a disturbing scenario.

In an interview with the Reviews Hub whilst Scenes from an Urban Gothic was at Edfringe, Cross and Truscott said that the performance was inspired by characters like Joseph K from The Trial, and there certainly is something Kafkaesque about the show. There is an underlying feeling that there’s something sinister going on, even when Cross is birdwatching through hand glasses. It’s this combination, along with the stage effects and Cross’s absurd physicality, that makes Scenes from an Urban Gothic an outstanding piece of theatre.

Scenes From an Urban Gothic runs though 19 February.