Luna is exactly what it describes itself as: ‘A Play About The Moon’. Through a series of sketches from characters ranging from sensible to kooky, our favourite satellite of the Earth is explained and questioned. A charming quality of Toby Hulse’s play is that it does not favour science over story, or vice versa. Luna is a pleasant balance between lessons about how the moon works, and the myths and mystery around it.

END_OF_DOCUMENT_TOKEN_TO_BE_REPLACED

In 1914 Sir Earnest Shackleton set off to cross Antarctica via the South Pole, but the mission was cut short when one of the two ships froze in an ice floe that eventually crushed it. Miraculously, the men were able to seek help due to the ship’s carpenter repurposing the life boats to make them suitable for long journeys in turbulent water. That carpenter’s name was Harry McNish, and in his dying days on a New Zealand dock, he relives his memories of that voyage.

END_OF_DOCUMENT_TOKEN_TO_BE_REPLACED 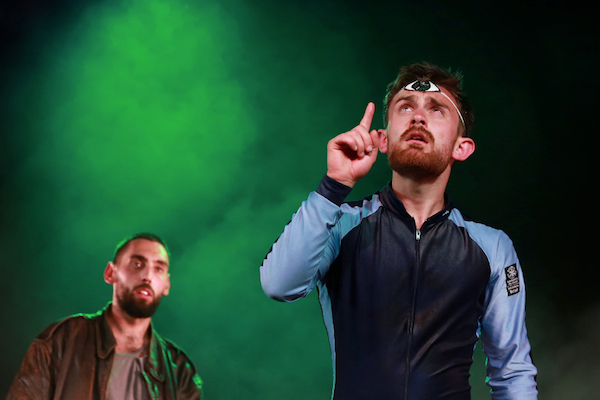 END_OF_DOCUMENT_TOKEN_TO_BE_REPLACED

From a successful run at Edinburgh Festival Fringe, Mat Ewins bring his well-received show to London’s VAULT festival. This is a series of daft but funny jokes, using faked videos and audience participation supported by a spine of an Indiana Jones-style adventure. The quest is to obtain a magical amulet to prevent the closure of his museum.

END_OF_DOCUMENT_TOKEN_TO_BE_REPLACED

You’re fast asleep in your bed, in a small English town. Then some mysterious noises outside wake you, and on looking out your window you discover a gang of pirates is trying to steal your family home. What do you do?

Ask to join them, of course!

END_OF_DOCUMENT_TOKEN_TO_BE_REPLACED

Nick is fearless. Literally, he can’t feel fear. The young man’s father finds this most unsettling and whilst Nick thinks it’s kinda cool, he desperately wants to find his shudder so he can fit in with everyone else in his small coastal town. When a mysterious stranger appears on the beach and offers to help, Nick jumps at the chance. This modern myth by Anna Beecher is a vibrant, young hero’s journey through a dark underworld of a solo performance with good potential.

Daniel Holme tells Nick’s story with sweet, wide-eyed naiveté, making the people he encounters in the big city after his father sends him away all the more threatening. The gang of men with green gloves who claim they will help him find his shudder through increasingly extreme tasks builds suspense and danger to a climax in Beecher’s script that Nick only vaguely understands. An open ending and some unanswered questions are a bit of a letdown, but otherwise her script is a good piece of storytelling.

Holme’s performance does a good job at keeping the audience’s attention, though more dramatic lighting design, projections and/or props would add visual variation and further increase the ebb and flow of his adventure. Beecher’s language contains some gorgeous moments of imagery and dystopia that certainly deserve to be supported further through a strong design concept and a larger space that grants more freedom of movement to Holme.

Skin of the Teeth is a strong character monologue that can work well on its own, but also has scope to develop further into an action-driven, multiple character script. The story is a good concept though in its current incarnation in a small venue, it is limited in its power. Beecher is a promising writer with dynamic ideas who, with more resources, has the power to make even greater impact.

Our oceans are dying. Just yesterday, the news reported that 95% of the Great Barrier Reef has been bleached due to temperature rises. There are huge swathes of sea with high concentrations of microplastics that leach toxins into the water and the food chain. We are overfishing our oceans, causing a myriad of problems to human and sea life.

Tucked In is trying to change that through Leaper: A Fish Tale, an adventure story for families about a young girl’s discoveries in the world’s waterways. The unnamed daughter isn’t particularly interested in her dad’s fish farm and wreaks more havoc than anything else. But after falling into the stream in pursuit of a dropped crisp packet, she makes friends with Leaper the salmon on her journey from stream, to river, to ocean and back again. Good puppetry and movement keep younger ones engaged in this surprisingly complex story, though at times it feels a bit too convoluted and the lack of dialogue is unnaturally forced.

With an impressive array of animal puppets by Claire Harvey and Annie Brooks’ transformative set, there’s plenty to look at in the show’s recycled aesthetic. The larger puppets have an excellent range of movements, particularly the duck, seal and big fish. The rubbish monster is the most wonderfully inventive surprise, and the large jellyfish are poetry in motion. The smaller puppets are understandably simpler, but less dynamic with fewer moving parts. The baby fish, though sweet in the way the human characters treat them, are harder to see and not particularly interesting in and of themselves. The design really comes into its own in the middle of the ocean, with atmospheric lighting and sound to match.

Though the show wants to address both overfishing and ocean pollution, the littering is the primary focus. It makes sense as children may struggle with the concept of overfishing, but the plot points on the topic are consequently less engaging. There aren’t many of them though, and the focus is almost solely on the girl’s (Lizzie Franks) journey.

The performances by Franks, Philip Bosworth and Robert Welling are engaging and precise, though the reason for minimising speech is unclear. There are plenty of vocal effects, but character communication and actor impulses feel unnaturally limited. It doesn’t interfere with the story and the children in the audience aren’t bothered, but it doesn’t contribute to the production style.

Leaper: A Fish Tale is visually compelling with some great puppetry and an engaging story for children and adults alike. The performances are good and the story has all the necessary components of a satisfying adventure tale with a clear moral. Though there are some small issues, they don’t interfere with the overall enjoyment of the piece, and this show could play a powerful role in raising engaged, environmentally conscious young people.

Leaper: A Fish Tale is touring schools and theatres in April.

Hannah is a little girl that loves gorillas. She spends all day drawing them, watching programmes about them, and talking about them. She tries to share her love for these wonderful animals with her dad, but he’s too busy. Then, on the night of her birthday she received a small toy gorilla that comes to life and takes her on an adventure, teaching her about kindness and gratitude, and her dad then gives her the best birthday ever. This classic children’s book, Gorilla, is charmingly brought to life with two actors, two puppets and a detailed but lo-tech set for children aged four to eight at Polka Theatre.

The story is a wonderful little adventure, executed quietly and calmly, without special effects and updating to reflect present day. Even the music sounds like it comes from a 1970s lounge bar. Initially I found it all terribly old fashioned, but considering the technology children are bombarded with today, it makes a refreshing change and reminds us that children don’t need an ipad and hi-tech toys to entertain them by the time they’re 3. After Hannah’s introduction, the sequence to establish her day-to-day routine and dad’s busyness is rather repetitive; the children in the audience became a bit fidgety and chatty. Once Hannah’s birthday arrives and the adventure begins through puppet versions of the characters, the audience of little ones becomes quiet and focused. Set changes tend towards the lengthy side, but the reveals that come from the set flips, rope tugs and lighting changes are choreographic in and of themselves.

The puppets suit the design of the set, old fashioned but still detailed and expressive. Actors Ceri Ashcroft and Phil Yarrow are good, with lovely chemistry, though at times it was hard to hear Ashcroft during the songs. The barometer for children’s theatre is the children in the audience though, and these maintained a steady focus once Hannah and her gorilla friend meet. They took some time to settle and weren’t grasped by the beginning exposition, but the rest of the play more than compensated.

There were some lovely staging choices by director Roman Stefanski. Particularly notable are the puppets coming into the audience as it transformed into a cinema and watching the audience as zoo animals from outside the bars of the cage. Transforming the human sized set into a puppet sized one also enchanted the audience, both adult and child. This is particularly praise-worthy as the transitions were quite lengthy and all changes (or most of them) looked operated solely by the performers.

This was my first visit to the Polka. What I found most disappointing was that the house was only half full. The theatre could certainly do with the revenue full houses generate, and this production makes a refreshing change from the fancy bells and whistles of West End family shows. The building emanates a warm sense of community that local families should enjoy more often, and it’s a break from fast and loud modern life. After all, people my age and older thrived in a childhood without the internet and handheld gadgets. Gorilla not only tells a sweet story with a strong female child as a lead, it proves that children today can enjoy live entertainment that quietly focuses on old fashioned adventure storytelling.