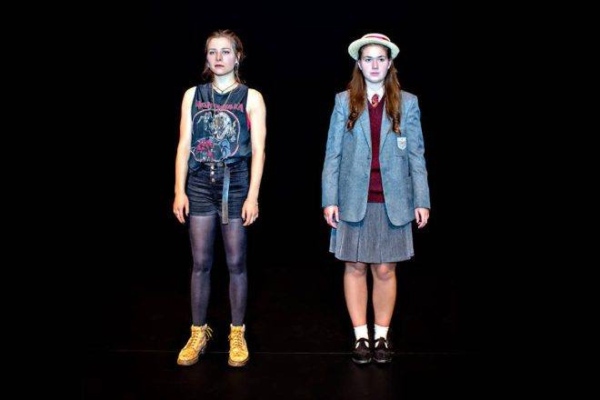 A girl in a school uniform, Steph, walks into a bar. It’s dark, and empty except for the bartender, Bell. Steph shows Bell a photo of her friend who’s missing and asks if she’s seen her.

This simple transaction, in a world plagued by blackouts in which women and girls disappear, is the start of a quest for a truth much bigger than one missing girl. As much as the standoffish bartender tries to dissuade her, the girl won’t take no for an answer.

Lulu Raczka’s script relies on narration and design to communicate the fear these women feel, not just in the blackouts but in anticipation of them. Their awareness that they may not survive the next one is an honest reflection of how women move through life – our inner monologue of, “will the man across from me on this empty tube carriage try anything? Can I make it home without being followed? Can I have a drink in this pub without being groped?” rarely lets up.

Similarly, the child-like role playing and counting the pair use to manage their fear looks at our coping mechanisms in the face of danger. If we don’t manage to keep our anxiety in check, or women are having to function in the world in a constant state of management much of the time, what is the impact on women and our wider society? It’s a question that raises troubling answers.

Raczka effectively evokes unease through language – rather than showing the events as they happen, the audience’s imaginations are called to do much of the work. This is no doubt more distressing than putting it all onstage. The story isn’t laboured, though. Its rapid pace and sparse details don’t condescend, and we have to be constantly aware and alert – like Steph and Bell.

Kieran Lucas’ sound and Peter Small’s lighting work together in fluid synchronicity to stoke tension. With lengthy sections taking place in blackouts, the effect of the design is all the more heightened. Tightly focused spots and strip lighting at chaotic angles gives a sense that the characters are under surveillance, and the already gloomy light could give way to total darkness at any moment. And then really horrible things can happen.

This is a sharp, clever and destabilising work that may appear like a simple, dystopian thriller on the surface, but the commentary about life as a woman, and how people cope with stress and fear, has much more power.

A Girl in School Uniform (Walks into a Bar) runs through 17 February.

2 thoughts on “A Girl in School Uniform (Walks into a Bar), New Diorama Theatre”