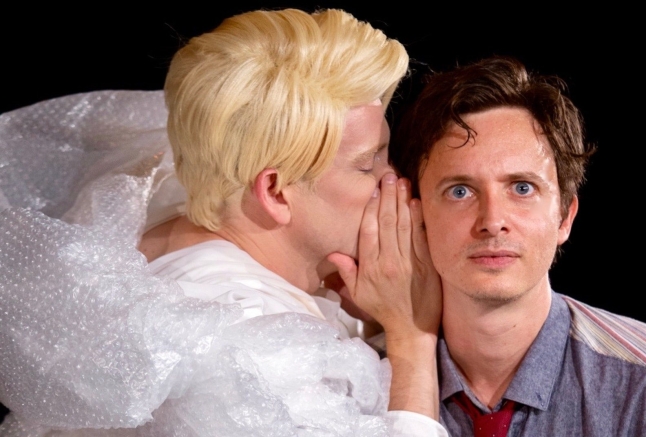 Idiosyncratic, eccentric, fearless and alien-like are just a few of the descriptors a rudimentary Google search of Tilda Swinton will throw up. Based on these, Byron Lane’s Tilda Swinton Answers an Ad on Craigslist has absolutely captured the essence of an icon. It has undoubtedly created a new one, too.

From the moment Tom Lenk’s version of Tilda swans in to Walt’s apartment, all high camp, bravado and bubblewrap, it’s clear we are in for a fabulously surreal and sassy evening.

Walt, played by Lane, is down on his luck. Dumped by his boyfriend and full of existential angst and self-doubt, he decides to take his own life. Enter Tilda, apparently responding to an advert for a spare room which Walt’s ex, Bobby, has posted on the listings site of the title. Like an intergalactic, drag Mary Poppins (you know the type), she arrives with a bag full of inexplicable items, an ego the size of Australia (where she is definitely not from – that’s Cate Blanchett, arch nemesis, cue cat hiss) and a plan to use Walt’s tragic life as material for her bid to win Oscar number two (‘even Mo’Nique has one’).

Hilarious and utterly weird, the play is basically a showcase for the wonderful Lenk, who against all odds manages to bring real depth and nuance to the catty, egotistical, hysterically funny Tilda. But the supporting cast also impress, especially Jayne Entwistle as Walt’s mother, whose clear and well-pitched delivery makes for a strong argument against the distracting and unnecessary use of microphones in a relatively small space.

Packed with references to the real Swinton’s roles, sharp takedowns of actorly pretentiousness and movie-making jargon, the play is probably enjoyed most, but by no means exclusively, by film buffs. However, at the bottom of all the in-jokes, sass and surrealism, there’s ultimately a warm, if well-trodden, narrative. The main character comes close to suicide but learns to live again thanks to the help of a guardian angel. It’s familiar, uncomplicated schmaltz, but it’s weird and wonderful enough that it doesn’t really matter. Oh, and at the end you can queue to get a selfie with Tom Lenk as Tilda. Might even be better than the real thing…

Tilda Swinton Answers an Ad on Craigslist runs through 10 February.