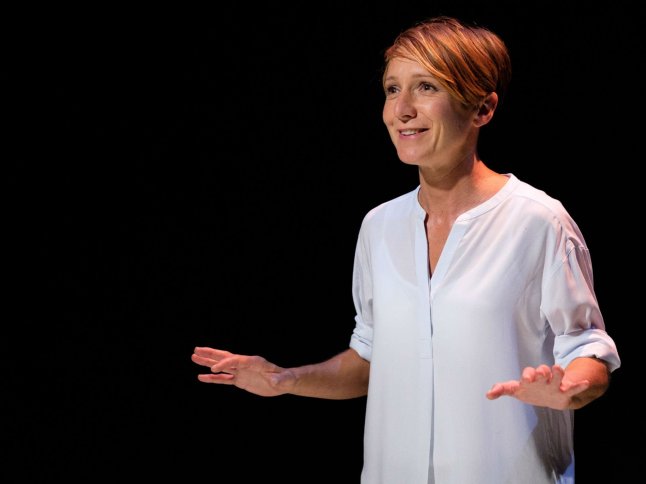 There are guns everywhere in America. Real ones, and pictures of them, hidden and overtly displayed. This constant threat of violence gives the unnamed uni lecturer and mum in this monologue nightmares and anxiety attacks. She awaits the day when a male student takes issue with his grades, or the course content, or anything else that threatens his masculinity and barges into her office or classroom and guns her down.

But this woman is caught off-guard by another shooting – one she did not expect or prepare for. As she navigates her foggy world after this incident, she develops an obsessive need to understand the shooter and to recreate the victims’ final moments. It’s contradictory to her whole being and everything she stands for, but she can’t stop.

Carefully picking around a floor covered in fluorescent lights scattered like a pile of dropped pick-up sticks, she speaks directly to the audience about her grieving response to these incomprehensible deaths. Her reaction captures just how embedded guns are in American culture on both the pro- and anti-gun sides. There’s no ambivalence here, and fear of being shot and defending the right to bear arms is a driving force behind the culture.

When I was around 9 or 10 years old, a student tried to kill my dad. He was the assistant principal of a middle school and responsible for doling out punishments to the naughty kids. As a student in the US school system, I walked through metal detectors to get to my classes. As an adult, I worry about my friends who are teachers back home.

But I reflect on these experiences from a distance and wish my home nation would ban guns, like my adoptive country has. I feel helpless, like the woman in this story, against the immense and wealthy gun lobby. Her story shows the issue is far from clear-cut, and such an ingrained part of American culture that it will never go away.

It’s not shocking, though – not to Americans. It’s part of our everyday life. Staging this story gives a voice to victims and perhaps educates British audiences, but an easy reaction is to tut at America and look down on the massive, divided country. This is a uniquely American issue that non-Americans have a cold distance from, so what is the aim of staging this work in the UK? Our cultural tragedy is not up for judgement by those outside of it, no matter how good the dramaturgy and performance is.

On the Exhale runs through 27 August then tours.