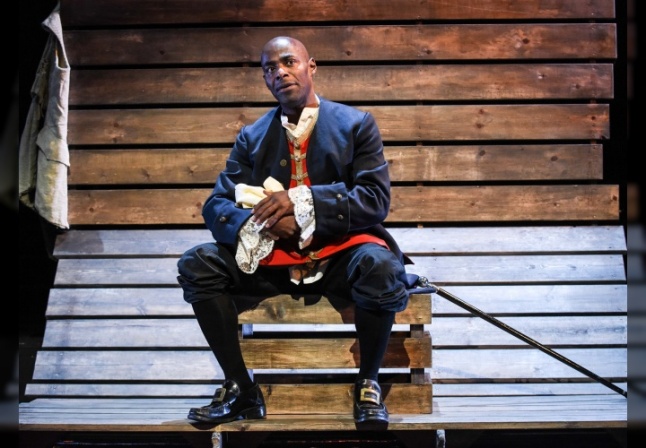 Like many before and after him, Ignatius Sancho was born on a slave ship in 1729. Unlike other slaves, the orphan received an education, married, owned property, published letters and compositions, and was the first black person to vote in a British election.

I’d never heard of this man, nor have many others raised and educated in the UK in last night’s audience. Though Sancho was painted by accomplished portrait artist Thomas Gainsborough and hobnobbed with the likes of David Garrick and Laurence Sterne, his legacy seems largely forgotten by the British public.

But Paterson Joseph is doing a remarkable job at paying tribute to this remarkable man’s legacy that includes working to stop slavery in Britain. His solo play Sancho, which premiered in 2015, is a vibrant homage to the man and freedom itself.

Joseph is a compelling performer with one of those distinctive energies you can’t help but watch. After introducing the piece as himself, we see periodic glimpses of the man behind the character. He holds the stage and the audience throughout, and regularly checks in with us. He creates a warm atmosphere of friendship rather than a more distant performance separated by a fourth wall.

Joseph’s energy keeps the story ticking along at a good pace, but at times the script is a bit muddy. Particularly towards the beginning, it’s not always clear when there’s a change in time and place and how Sancho got to that moment. This is not a play to watch casually, or when tired. It’s not always clear what the story is working towards, but this makes the barnstorming closing monologue all the more surprising and powerful.

Suitably period music by Ben Park and moments of distinct, dramatic lighting by Lucretia Briceno help highlight more pivotal moments of the story, add clarity to less clear moments and demand audience attention. The set is simple and flexible, evoking a slave ship of sturdy wooden construction, a shop and a city of wooden buildings, but doesn’t fight against Joseph’s remarkable performance.

With Joseph’s charisma generally covering any textual issues, this is a show that entertains, educates and awakens. Regularly touring since it’s premiere, it deserves to run and run and run. It should also be required viewing for school children and anyone who calls themselves British or aspires to be.