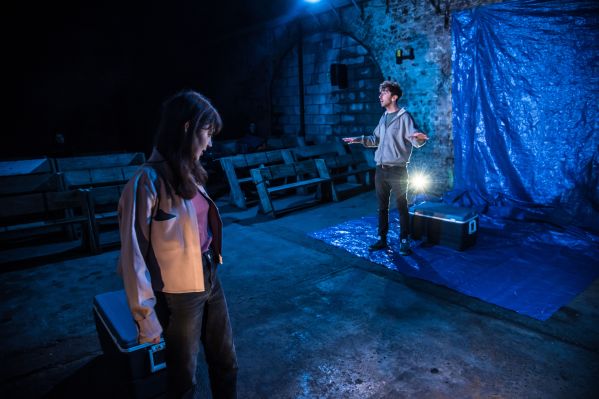 It’s a strange thing to hear the sea when you’re 40 odd miles from it, sat on a wooden bench underneath train tracks and footsteps.

A blue tarpaulin. Plastic crates. The stuff of seafarers.

The dampness in the underground air acquires a salty tang.

The high brick walls crag themselves into cliffs embracing a beach.

We are sat around in the half-dark, waiting for something to happen, the tide to come in at dusk.

Then the blueness is unfurled and the waves are lapping at our toes.

In My Lungs The Ocean Swells by Natasha Kaeda follows Julie and Simon – two teenagers from a town in Cornwall built from sea foam and fish guts. It is, at its heart, a love story. Not just between these two kids, but between them and the sea: a third character in this two-hander. It has personality. It is both their antagonist and their mentor. A parent, a lover, a vulnerable child to be protected. An uncaring force of nature and a best friend.

The story begins with a classic premise. Julie (Jenny Walser) dreams of something else. Not something bigger or better, just something different. She wants to travel. Walser gives a brilliant tight-bodied, agitated performance, like she’s got aspirations on the end of a fishing line that she’s doing her best to pull in but isn’t quite able. Her restlessness is palpable and we are genuinely happy for her when she finally relaxes into her new city life. Meanwhile, Simon (Jack Brownridge-Kelly) has sea salt in his veins and fish scales under his fingernails. He belongs by the sea, and can’t quite understand why Julie would want to leave.

Brownridge-Kelly’s portrayal feels warm, inviting. Down-to-earth and homely like a good pub. As a pair, the characters are tangibly disconnected from each other even in the rare moments they touch – the current pulling them in separate ways, bobbing away from each other on the plastic sea. But, crucially, they never lack in chemistry or intimacy. As they take it in turns telling their side of the story, their counterpart watches on with love in their eyes, or confusion, or pity. It’s confessional and raw and the emotionally intelligent direction – orchestrated by Tash Hyman – must be commended along with the performers.

Kaeda’s writing, too, is a feat. It gives everything you would want from this kind of piece. It knows when to be poetic and lyrical – there are moments where I genuinely wonder if it is written in verse – but can switch to zingy, quick-witted dialogue scenes at the drop of a hat, never allowing one or the other to get too tiring.

But where the writing succeeds best of all is in its portrayal of the real, small, personal effects of the climate crisis. Drought, famine, sea levels rising – it all seems too big to comprehend. But this is a story that deals with the human element. The effects of the decline in fishing on a single couple, and especially on a single person, Simon, who comes from generations of fishermen, are clear. Suddenly these big issues seem very close to home. We rightly worry about human health and loss of species, but never consider the loss of culture as a result of climate change and pollution.

Walking home, I think about the Gurung people of Nepal, whose lives and culture revolve around beekeeping traditions. Ancient religious sites around the world are threatened by rising sea levels. We can invent our way out of food shortages and so on; we have the technology already, it’s just not being funded. But what about the psychological effects? When our cultures and traditions are wiped out and, with them, our sense of identity?

It’s a strange thing to hear the sea when you’re 40 odd miles from it. In a city. With lights and smoke and a single fishless freshwater streak through its centre.

And suddenly, the sea couldn’t feel further away.

In My Lungs the Ocean Swells runs through 9 February.