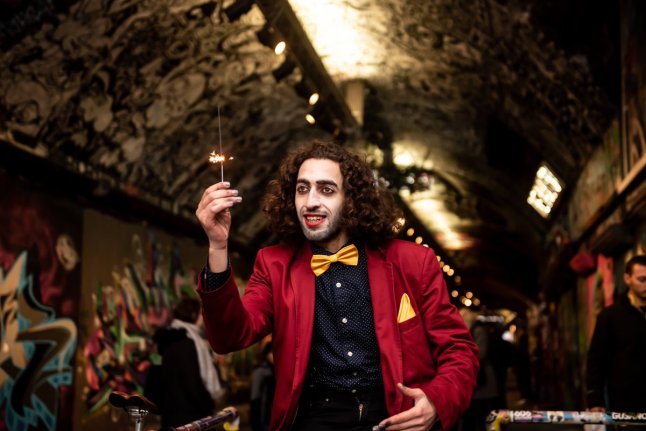 Expert storyteller Osama Al Azza conducts a tour of his home, Palestine’s smallest refugee camp Al Azza, within the city of Bethlehem. A short, sharp, site-specific show which imaginatively blends fun into a personal tale about the brutal reality of living under military occupation.

A review in five vignettes.

Clown to the left of me and graffiti artists to the right. The clown is Osama Al Azza. He hands out lamps and the smallest folding stools ever made by man. The person beside me is on her own, as I am, and she slyly shuffles closer to me. Osama welcomes us to Bethlehem – we’re going on a tour.

2. Further into the tunnel /

Osama gestures to the large wall of graffiti art behind us and speaks of the walls of his home, the smallest refugee camp in Palestine. The smell of spray-paint is thick in the air as he paints his picture of growing up under military occupation: fear, fun, family. My arse cheeks swallow the little chair whole and my new friend falls off hers into a small puddle.

We line up on our micro-stools in front of a shop. Passers-by giggle at us like we are clowns on teeny bicycles. I realise Osama has slyly welcomed us into clownhood. He muses about identity, about cultural appropriation. He draws our attention to the street and draws unlikely parallels with those of Al Azza.

Osama imitates the soundscape of the gun shots sliding past them on the streets during his youth (pff   pff   pff). Rain falls lightly onto the hood of my raincoat (pf   pf   pf). He describes playing with his friends; our guide’s narration is a contradictory cocktail of nostalgia laced with fury. Violence doesn’t negate creativity, or culture, so he brings music and biscuits. We dance. I think of that Walt Whitman quote: ‘we contain multitudes’.

Seconds ago, we were boogying through the tunnel and now we’re back to where we began. Two men in bright yellow coats had joined us. I think about what they saw: a clown merrily escorting a group of people (not unusual in the backstreets of Waterloo during the festival).They can’t hear the story we’re being told. There are some stories that exist in the shadows and we must look in the right places to gain new perspectives. What we see on the news about Palestine is not this story.

Osama sings us out with a deceptively light song about what is lost living in a site of unrelenting conflict, and who is responsible.