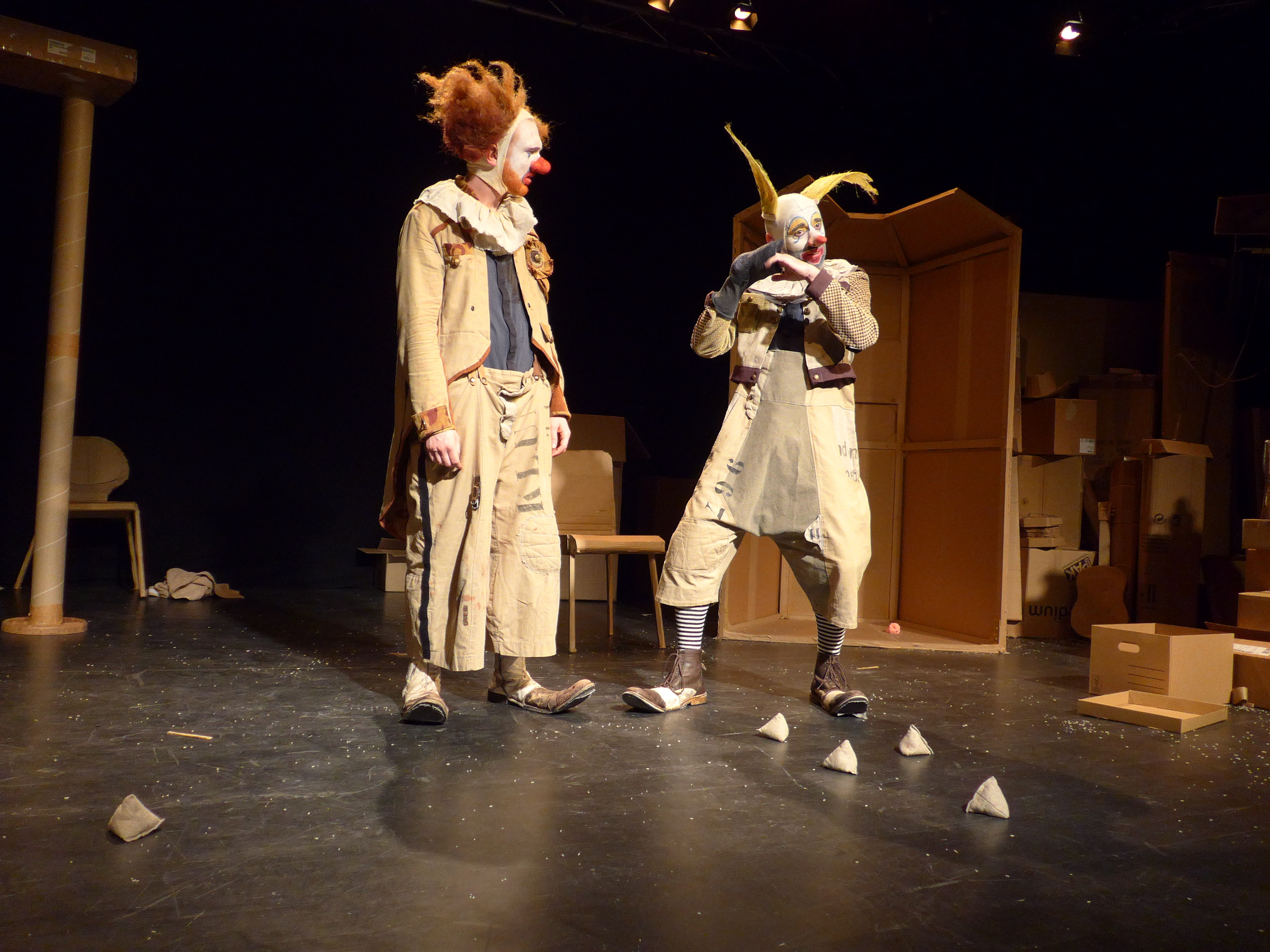 Pickled Image Theatre work with John Nicholson to produce and write Coulrophobia, which has been touring on and off for seven months. Coulrophobia – Two Clowns Trapped In A Cardboard World is performed by Dik Downey (company director) and Adam Blake. The tragic twosome pull out a series of cardboard puppets as they frolic about a set full, but not quite full enough, of cardboard boxes.

Their intimate audience are good sports, enjoying being covered in silly string, dragged up on stage to dress up, or dine at a table with nightmare date Adam who is controlled on strings by puppeteer and partner in crime Dik. Dik and Adam, dressed as slightly scarier and scruffier versions of traditional clowns, use a series of props and puppets to perform slapstick vignettes that don’t progress narratively or comedically.

Coulrophobia, meaning the fear of clowns, explains the dark humour of this work where tragic clown Adam’s attempts to fall in love or leave the cardboard world altogether are thwarted at every turn by his partner Dic or the booming voice of an evil puppet in charge. Hands are chopped off, dry humping and snogging appear from nowhere, as do genitalia and the odd sexist joke which make the work feel grubby and cheap.

A large box is suddenly turned on its side as a tank that fires coloured balls from a cardboard cannon into the audience, which creates a fleeting moment of beauty. A vulgar clown puppet goes rollerblading, and snaps the necks of Dick and Adam in a mini puppet show-within-a-show. We meet a sheep puppet who was shut in a box, see a violent death and quake with fear every time the devilish duo bound into the audience to drag yet another victim onto the stage.

Both clowns are strongest when working behind objects, bringing inanimate socks, or mini versions of themselves into the limelight in the “finding your inner puppet” scene with a rather large nod to Punch and Judy. There is a tension between the potential for sophisticated object play and a running text of jokes that disrupt what could be an exploratory work if developed from the objects at its core.

Coulrophobia lacks laugh out loud content with easily predictable jokes. The speech, physical postures and form of each vignette often land at the first and most obvious result which is the least expressive. The scattering of swear words and obligatory willies out scene makes it an adult show for its obscenity rather than its witty dark content. Dic and Adam arrange for audience feedback in the foyer on postcards which provides a context for a work that is in development. After asking an usher and a duty manager if the show was a work-in-progress, their vacant responses are somewhat frustrating. I am told to wait for the clowns to come down, however after an evening of Coulrophobia, the feeling seems to linger. I make a swift exit for a walk by the river with a chip butty to put me back together again.

Coulrophobia runs through 6 May then tours.