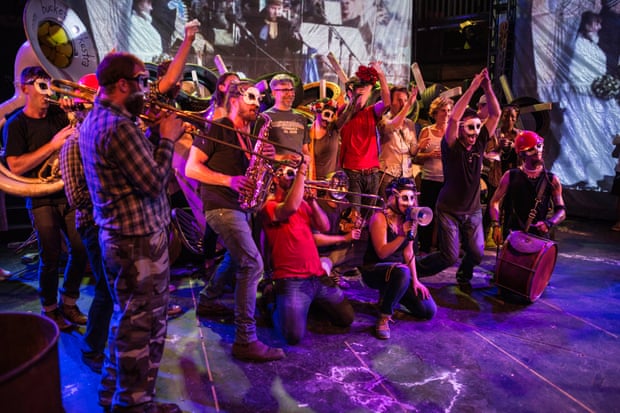 Just over two years ago, a revolution in Kiev ushered in the downfall of the Ukranian government. Protests against the government’s refusal to sign pro-EU legislation lasting months had several violent outbursts that saw hundred of people injured and 780 killed. Toronto-based Ukrainian musician Marichka Kudriavtseva, in Kiev for work at the time, joined the protesters where she met Mark Marczyk, also based in Canada.

When the two returned from the Ukraine, they teamed up with Marczyk’s Lemon Bucket Orkestra to create Counting Sheep, an immersive “guerrilla folk opera”. A celebration of solidarity and the power of a collective voice, it also mourns those who died in the protests. Told from the perspective of the protesters, little is shared from the other side – but this rallying performance is fitting homage to not just the Ukrainian protesters, but those fighting government tyranny around the world.

Some audience sit around a huge table, whilst others sit on the sides of the space and still others up in a balcony. Klezmer or folk music is playing as the audience enters; there is a convivial atmosphere as the show formally starts. This is a party, or a wedding, or some other huge gathering, until the three screens display news reports of riots and police enter. The tone abruptly shifts, and the world that has been established is dismantled. It’s a wonderful, unsettling surprise.

The space is consistently reformed and redrawn using movement, and the audience is physically moved in the wake of the protesters’ gains and losses. They are willing and unquestioning, the sheep of the title. Though the numbers here obviously pale to those at the actual protest, incorporating the audience in acts such a building barricades and lobbing bricks at police fosters unity from disparate dozens. There is a hint of the solidarity and aggression found in protests, and joy and celebration from the audience who are keen to play. Being served food is also an important enabler that solidifies the unity the show aims to create.

Counting Sheep is hugely effective in its emotional manipulation, and also it’s storytelling through music, movement and projections. Choosing sheep as a metaphor is a curious choice, though. The benign but rather dumb livestock aren’t known for thinking for themselves and are susceptible to herding – otherwise, they wander around unproductively, getting lost and eaten by predators. Whilst the performers are the herders here, they are also in sheep masks, unempowered. Who then are the herders? The government? Unseen forces of political and social unrest? Whatever it is, us human beings are hugely susceptible to it when motivated enough, even if the metaphor isn’t totally clear.

Though sung completely in Ukrainian, there is a clear storyline conveyed through projections and movement. There is little nuance in this piece, but it a playground for the sweeping emotions of popular theatre. It provides at least a hint of the experience that the Ukrainian protesters endured, and powerfully unites the audience through the humanity of collective experience for a common goal. An excellent piece of theatre.