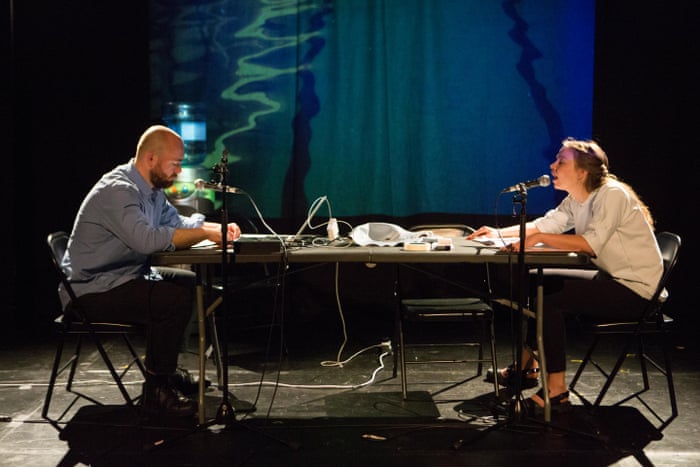 END_OF_DOCUMENT_TOKEN_TO_BE_REPLACED

What happened to King Lear’s wife? The woman who birthed the three daughters that he loves so dearly is never mentioned in his title play. Back in the ’80s, the Women’s Theatre Group and Elaine Feinstein created Lear’s Daughters, a flawed, feminist play attempting to reason why Goneril and Regan do what they do by depicting the girls’ upbringing. Their mother is present, but ill and rarely thought upon until her death at the hands of a sex-crazed maniac. Lear and his obsession with having a son cost her her life.

Ronnie Dorsey, perhaps inspired by this version that focused on the daughters rather than their mother, puts the young queen centre stage in Queen Lear. Also a feminist perspective, this script is reflective and revealing, but slow to develop and incorporates a disconnected subplot that results in an unlikely end.

Alice Allemano is the young queen, heavily pregnant with her second child. Goneril and Regan are the daughters of his first wife, a good device that explains the sisters’ disconnect in Shakespeare’s play. Lear’s need for a son translates to her conviction that the child is a boy, but the pregnancy has not gone well. She is overdue, in constant pain, and begs her nurse and the Father overseeing her care to cut the baby from her body. Through her medicated delirium, she reveals her transition from blushing, wide-eyed bride at 16 to an abused incubator. Jane Goddard plays the nurse and Mary McCusker the priest; the trio of women have a warm, maternal chemistry and all are excellent performers.

Dorsey’s script, whilst an interesting premise, has some issues. The dialogue is overwritten and obstructions any natural tension that would arise from the situation. It also slows down narrative progression and often feels clumsy. The secondary plotline, though it has potential to develop into its own story, feels out of place and not fully integrated. The big reveal is barely acknowledged by the other characters, briefly discussed, then forgotten about in light of the queen’s health.

A thorough trimming would do the text a world of good and free up space for more action. The performances are strong and the examination of this forgotten character compelling, but one that could be executed more smoothly.