Science and Mathematics. Vaccinations, space travel, electricity. Nuclear weapons, lethal injections, pollution. Poena 5×1 and No Horizon. One is a new play showing the dark potential of science, the other a new musical celebrating overcoming disadvantage through maths. Radically different in style and story, both productions find inspiration in the potential of science, maths and technology, and both need further development.

Scientist Bryony Adams works for the Department of Justice in Poena 5×1. She’s a typical Tory suit who fully believes her horrifying work benefits the greater good – she invented Poena, a drug that reduces prison populations through humane punishment (whatever that is). Named after the minor goddess of punishment, Poena induces a state of despair and hopelessness that can lead to catastrophic mental consequences for the prisoners that are her voluntary test subjects. Bryony becomes emboldened by praise as she further develops the drug, deciding to test it on an unknowing volunteer.

Bryony is a despicable character that Cathy Conneff plays admirably, particularly as she begins to emotionally deteriorate. Considering this is a solo performance with little visual element, her ability to maintain audience focus through compelling embodiment of the character is excellent. The character presents her work to the audience until a twist reveals all is not what it seems. It’s at this point that Abbie Spallen’s script starts to lose its way. As Bryony’s story becomes more personal and less about her work, the narrative becomes knotty and unclear, having a knock-on effect on the script as a whole that until this point, terrifies through the government’s potential to commit heinous acts. Any themes and messages established about the horror of governmental capital punishment are unfortunately diluted. Reworking the ending to maintain character and plot continuity and clarifying the play’s message would take little work but have great effect.

In contrast to Poena 5×1, No Horizon has a solid, consistent script, but this new musical’s shortcomings are its music and the casting of this particular production. The true story of a remarkable young man in the 1680s looks at the power of mathematics to unite people across social class and ability. Nicholas Saunderson, blinded by Smallpox as an infant, learns to read through his friends’ support and tracing letters on gravestones. His envy and frustration grow as his parents enforce limitations on him because of his disability and his best friend in their tiny Yorkshire village goes to Cambridge. Through sheer determination and an innate aptitude for maths and physics, he eventually proves that in a pre-Braille era, disability is still no barrier to success.

It’s a wonderful, uplifting story with a generally good narrative arc, though most of the cast are gifted singers who struggle to match their acting ability to their voices. There is frustratingly little connection between characters, though George Griffiths as Joshua Dunn is a notable exception. The music is rather samey and repetitive without distinction, though there are some standout numbers amongst the Cambridge students. The music is pre-recorded, which makes it even harder to capture any nuance in tone and volume. There is minimal choreography, making the ensemble numbers more choric than musical theatre.

Theatre can be a powerful vehicle for maths and science, but in the cases of No Horizon and Poena 5×1, the subjects are let down a bit. Some tinkering is definitely needed to whip these productions into shape, but there is much potential in these character-driven stories. 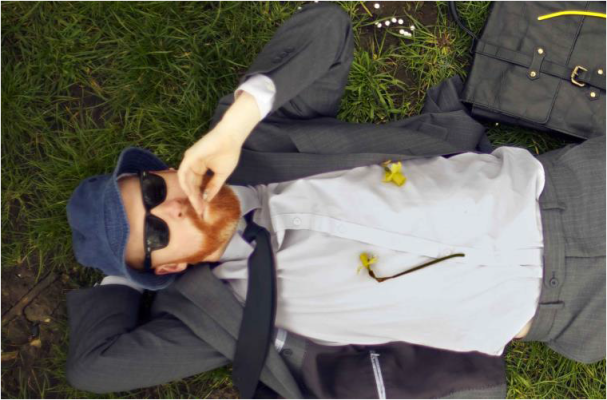 Dave’s a middle aged advertising executive from Yorkshire, now living and working in London. Amidst his humdrum life, he longs for his youth as a pioneering rave DJ playing to thousands of people, running events up and down the country with his ex, Molly. An invitation by a well-meaning colleague half his age leads Dave back onto the path he abandoned and his transformation into a cultural messiah to a generation focused on careers, property and conforming.

Oli Forsyth has a great script on his hands, despite a hint of judgmental condescension towards millennials. The script states they waste their lives on jobs they hate, have no cultural or creative identity and surround themselves with material possessions to make their empty lives feel full. Dave first aggressively voices this opinion, but his four comrades eventually agree that their generation is distinctly lacking in rebellion. Though this is certainly true of some people, others may find genuine happiness in their high earning, corporate lifestyles.

The opportunity to see Dave as a young man gives the story and character added depth, and there’s good continuity despite Dave being played by two different actors. The dialogue has a natural flow, though a few spoken word monologues feel out of place even though they are well written. There’s room to extend the story after the well-crafted, current climax that shows Dave hasn’t really changed his attitude since he was a young man willing to sacrifice everything for the scene. Lengthening would solve the issue of the abrupt ending by adding a dénouement that answers any questions about the consequences the present Dave has to face.

The ensemble of five is strong; they capture the anger and frustration innate to those trapped in unsatisfying lives. Andy McLeod as the present day Dave is excellent, with clear character choices and constantly bubbling rage that dissolves into bliss when raving or DJing. There’s little genuine warmth between the present day gang, which, although indicative of how self-absorbed millennials are, is unsatisfying to watch. Younger Dave (Forsyth) and Molly (Helen Coles) have some genuinely lovely moments, though a few are a touch overacted.

Happy Dave is remarkably polished for the Fringe, and a dynamic storyline with plenty of emotional rage effectively maintains attention. It’s certainly worth catching.