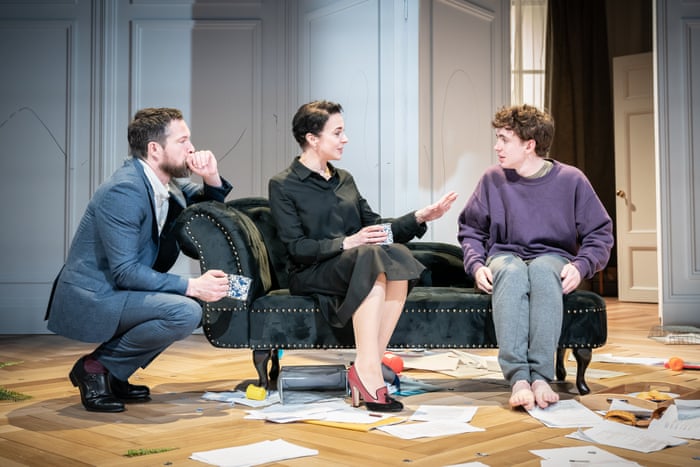 Nicholas is in pain. It is constant, all-consuming and prevents him from doing much of anything, and his parents don’t know how to help him. First he lives with his mum; then his dad and his wife and their newborn son, but the hurt is persistent, overwhelming and recognisable to those who have struggled with depression or poor mental health. This intelligent, young man’s agony is the pervasive focus of this well-made, family drama that, though formulaic and unsympathetic, captures the difficulties that ensue when mental illness has moved in.

END_OF_DOCUMENT_TOKEN_TO_BE_REPLACED

Jean-Paul Sartre wrote this in 1943, at the height of Nazi occupation of Europe. The adaptation of the Orestes myth centres on the city of Argos, ruled by King Aegisthus, who deposed and killed the previous ruler Agamemnon 15 years previously. Aegisthus then married Agamemnon’s wife Clytemnestra, enslaved their daughter Electra, and sent the young Orestes out into the woods to die. Since then, the city has been plagued by giant flies and the civilians must lead sombre and mournful lives – but Orestes has now returned to exact his revenge. This update is well-staged with a clear aesthetic, but the pace is often too slow for the high-stakes story.

END_OF_DOCUMENT_TOKEN_TO_BE_REPLACED

Decked in their finest formal wear, a chamber orchestra entertains the punters in a post-war Parisian cafe. During their songs, they are a picture of beautiful unity. In between? Not so much. The absurd and darkly comic backstabbing and in-fighting builds to a crescendo that ends in tragedy, but the production is ultimately unsatisfying.

END_OF_DOCUMENT_TOKEN_TO_BE_REPLACED

Flawless royal blue walls reminiscent of the sea surround an unresponsive, middle aged man lying in a hospital bed. Nurses and a doctor flit in an out, efficiently checking vitals and holding quick, whispered conversations with waiting family. This is Pericles, physically and mentally buffeted by a life of grief and tragedy, but this is not quite the story of Pericles that Shakespeare and Wilkins co-wrote. Translated into French and then adapted, Cheek by Jowl here present a man in poor physical and mental health trapped inside his head, in a world composed either of memories or the figments of his imagination.

END_OF_DOCUMENT_TOKEN_TO_BE_REPLACED

Exchange Theatre sets The Misanthrope in a contemporary newsroom full of gossip, affairs, backstabbing and cocaine-fueled all-nighters. Alceste loathes the way his colleagues behave, but fancies the flirtatious Celimene in spite of his prejudices. His jealousy and inability to be polite to his colleagues causes a litany of issues that play out over their broadcasts, eventually leading to his lonely downfall.

END_OF_DOCUMENT_TOKEN_TO_BE_REPLACED

Discovery of the evening: Louis Braille was a child when he developed the alphabet of raised dots into the writing still used by blind and visually impaired people around the world today. It’s an especially impressive feat considering the run down and under-resourced institution he attended, Institut National des Jeunes Aveugles in Paris. However, the prevalent hostile attitude towards disabled people was a constant obstacle towards the system’s adoption; even the belief that blind people could be academically educated was radical at the time.

END_OF_DOCUMENT_TOKEN_TO_BE_REPLACED

When the abusive, drunken woodcutter Sganarelle beats his wife one time too many, she takes advantage of passing strangers looking for a doctor to cure a young woman’s mysterious illness. Telling them she knows just the man, an eccentric but renowned man of medicine, sets the ball rolling on an absurd adventure of lust, remorse, and blagging it. Exchange Theatre, a French company based in London, have adapted Moliere’s The Doctor In Spite of Himself into a 75-minute contemporary version loaded with metatheatre, energy and good leading performances from a French cast. Plenty of slapstick, detailed design and Shakespearian influence make this a fun, easy to watch adaptation of the French classic.

Actor-director David Furlong plays Sganarelle with a goofy, watchable charm. His undeniable charisma is at odds with the unlikeable character, though his comeuppance and subsequent reform are a somewhat satisfying narrative despite the anti-feminist premise from the 1660s. Furlong is by far the strongest in the cast, but the others are generally good. Anita Adam Gabay as the mostly mute Lucinda exudes a sweet innocence, particularly in the opening montage where she discovers her betrothal to a man she doesn’t love. Matt Mella is the hilariously dumb Lucas, able to evoke laughter with a well-timed pause and a blank look. Some of the actors find it hard to connect to the language in English at times, but these jarring moments are fairly infrequent.

The edited plot occasionally feels rushed and overly compact, though it’s easy to follow and the translation uses relatively modern English. The excused wife beating is uncomfortably old fashioned, but at least it’s ridiculed – along with medicine and the gullibility of the upper classes. These themes translate fairly well to the modern day and English culture, especially considering the Shakespeare-esque comedy sequences that are likely to have drawn on the same commedia del’arte heritage that Shakespeare did. Furlong updates even further by adding in discreetly funny elements of self-reference, even if they don’t always work. The bust of Moliere as a weapon is cute, but characters dictating text to others from an anthology of Moliere plays isn’t as effective and causes energy to drop.

The design, presumably also by Furlong, incorporates an Elizabethan stage-within-a-stage to emphasise the metatheatre and clarify location. It’s clever and looks great, though it causes some difficulties with sightlines and narrows the playing area. Furlong’s overarching concept of using the metatheatre to create distance is a strong one what with its acknowledgment the absurdity of the story and the plot points that don’t work in a present day context.

This production of The Doctor in Spite of Himself is a funny, palatable adaptation of Moliere for London audiences. It’s a good laugh, a good length and has good performances. The company’s talent and vision is highly commendable and deserving of larger production values; their commitment to bringing audiences high quality French theatre in intimate venues makes them one to watch.

The Doctor in Spite of Himself runs through 17 July with performances in both French and English.

Icon Edith Piaf inspired numerous films and plays, including 1978 play with music, Piaf. The four foot, 8 inches tall chanteuse from a broken home died at just 47, but left a songbook often heard in popular culture. These songs, which feature heavily, epitomize the defiant spirit of a France under attack, painfully relevant today. Addicted to drink and painkillers, the little sparrow must have struggled immensely with her inner demons but Pam Gems’ script avoids such nuance, for her or any of the other characters. Cameron Leigh’s belter of a voice reveals Piaf’s passion and turmoil through her songs, and the rest of the cast provide good vocal support, but Gems’ diabolically awful book manages to be rushed, tedious and two-dimensional all at once.

Portrayed as a selfish, junkie nymphomaniac who treats people as commodities, there is little room for audience sympathy in the first half. The scenes are short and delivered with an even, speedy pace; it’s as if director Jari Laakso feels uncomfortable with Piaf’s poor characterization and the gaping jumps in time that leave even the most important of events glossed over, and he wants to get to the interval ASAP. The second half marginally improves as Piaf’s health declines and she is seen as frail, vulnerable and poor. A few of the lines get laughs, as the humour is less distasteful than earlier in the play.

Cameron Leigh is an explosive barrage of rudeness as Edith Piaf and clearly struggles to find any decency in the script’s portrayal. Instead, she wisely focuses on revealing the character’s emotional life in her songs, the best feature of this play. Backed up by her best friend Toine (Samantha Spurgin), Marlene Dietrich (the imposingly glam Valerie Cutko) and an array of multi-rolling men and actor-musos, their vocal prowess makes this production bearable. It’s a small cast for the number of characters, but there is some good physical multi-rolling and costume indications help make up for scarcity in the dialogue.

Laakso and the cast energetically do their best, but the overwhelming issue in Piaf is Gems’ atrocious script. Otherwise, the songs are well sung, the production suits the theatre well and the set (Phillipa Batt) and lighting (Chris Randall) are well considered and often striking. It’s just a shame Gems isn’t alive to re-write it.