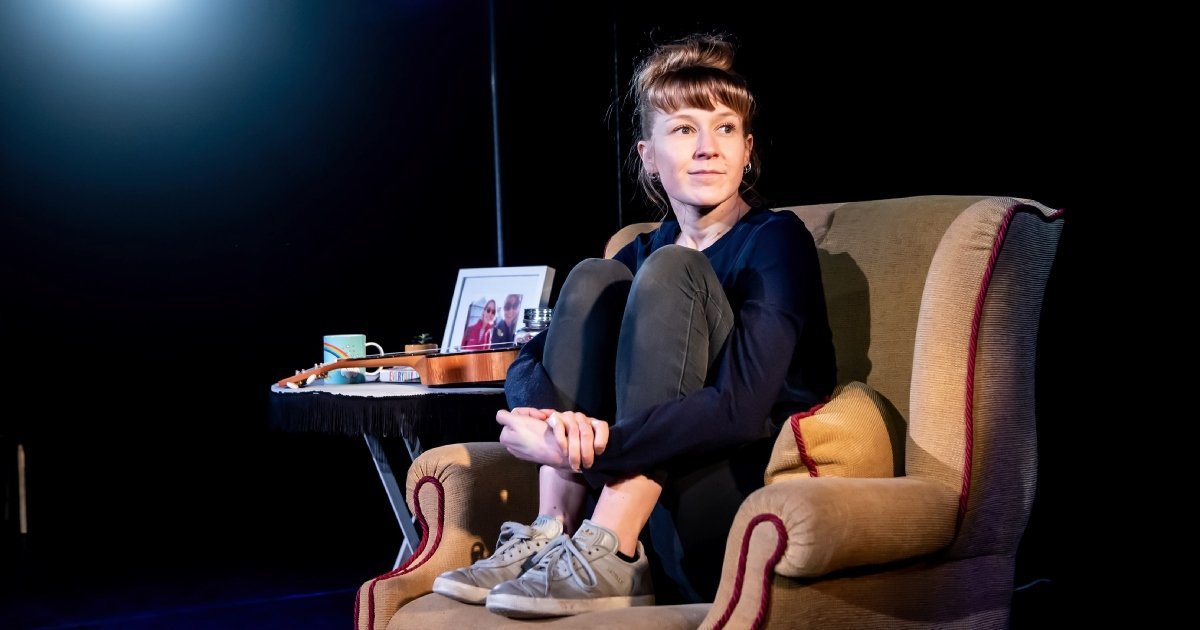 Disclaimer: Good reviewing practice is not to put yourself into your article – your review is about the show, not the journalist. But I have such an emotional connection to Katie Arnstein’s work, that I struggle to write about her productions as ‘objectively’ as I perhaps should. It’s probably why it’s taken me so long to put pen to paper.

Rhubarb and custard sweets, a ukulele, placards, and a voiceover montage of misogynistic statements that make you oh so angry – all signs point to the final installment of Katie Arnstein’s It’s A Girl! trilogy.

Two years on from Sexy Lamp, Arnstein is still in London and this time she’s looking for lust. New Year, new Katie Arnstein. Except she’s still having to deal with all of the old tribulations of being a jobbing actor, renting in the city and awful, awful people.

Arnstein is so likeable and charming, but Sticky Door is heavy in places. Because the VAULT festival and Arnstein are legends, there are trigger warnings on the webpage and at the beginning of the show so you’re fully informed, but it’s still hard hitting.

The accumulation of Arnstein’s poor mental health is unlike anything I’ve seen on stage before: from struggling to answer your loved ones’ calls, to being debilitated by your indecisiveness, to not being able to leave your room – or even your house. It’s not this one big dramatic moment, it’s a myriad of things that start off small but before you realise it, they grow to take over your whole life. By being so open, Arnstein helps to normalise these experiences of suffering with mental ill health, and that’s so powerful.

And the pill! It’s so refreshing to see such an honest portrayal of some of the negative side effects of taking the pill. Unsurprisingly, pumping huge quantities of hormones into your body doesn’t always play nicely with your mood, and there it is, being spoken about in front of you and a room full of people. More of this please.

If you’re wondering – as I was – the title Sticky Door is taken from a Desert Island Discs episode with Dame Minouche Shafik. Rather than a glass ceiling that once smashed, opens the way for all women to walk on through, Shafik’s experience of life is more like a series of sticky doors. You need someone to help you open it from the other side, and once through the door it’s your job to help open it for the next woman.

Arnstein finishes the show by challenging us to hold that metaphorical door open for the woman behind you. There is so much to take away from Sticky Door, but it’s that ask of sisterhood and smashing the patriarchy together that’ll really stick with you.