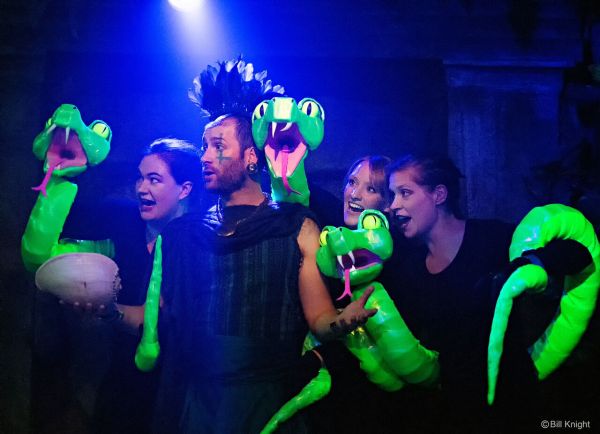 Designer Simon Bejer has created an environment that would rival something the big-name theatres would produce. It gets even better as the piece is played out, as new bits of set are revealed, stunningly complimented by Nicholas Holdridge’s lighting creation. The design is of the utmost professionalism; unfortunately this does not sit in correlation with the performances.

Monostatos and Sarastro give terrible performances; they are wooden, unclear with their dialogue and do not hold the stage well. Most of the cast can’t really act, others can’t sing, and some can’t do either. I overhear a few audience members questioning whether this was an amateur dramatic society, and have to agree. There are some saving graces – an announcement pre-show states that Emily Jane Thomas is ill, but has agreed to still go on as Pamina. You would never be able to tell, as Thomas gives a beautiful performance as a soft, yet strong-willed princess. It is a shame though, that no matter how hard she tries to keep the energy up, when in scenes with other performers the piece falls flat and she is left struggling on stage.

The stars of the show are the ladies, played by Jennifer Begley, Sarah Champion and Polly Leech. Their voices blend well together, and their mischievous nature during the initial scenes is a strong start to the show. The puppetry is extraordinary, and these three ladies ability to bring different characters to life is commendable. The snakes are a crazy acid trip, and the birds act as quirky counsellors, talking people down from committing suicide. But the most impressive puppet of all is the old woman, expertly brought to life by these three actors. The physicality is precise and the performances they give are worlds apart from the rest of their ensemble.

This version of The Magic Flute doesn’t have the gravitas required to effectively get across Mozart’s powerful story. The costumes are just fabric wrapped around performer’s body, or bits of material hot glue gunned together to create a disorientating mess. That being said, once you settle in to the amateurish nature of it all, you can enjoy the craziness that unfolds. It’s bad, in all the best ways. It’s cheap and tacky, but with a certain level of charm. But out of all the disordered chaos, it’s never at any moment boring.

The Magic Flute runs through 13 June.