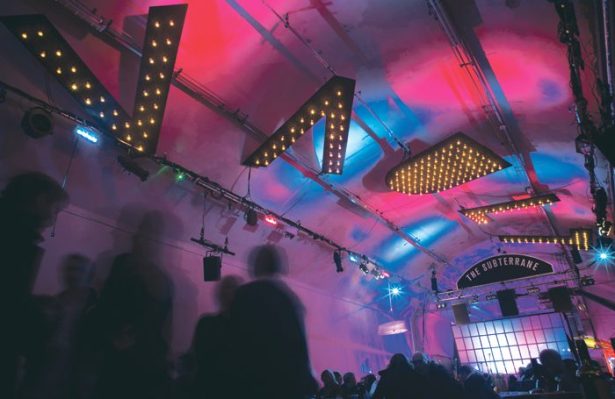 “Maybe I’m not built this way. Am I too sensitive?”

Sex workers and stripping is a prominent and controversial topic in feminism and  modern society as a whole. Given this context, it is no surprise that the subject has made it on stage in the form of Angels by She’s Diverse Theatre Company.

As they arrive, the audience are treated to a tableau depicting of three women teetering on the highest heels I’ve ever seen, two men, and a pole. Despite best efforts and some incredible artwork, use of projection to support the staging does not land as effectively as it could. While the images displayed on the background work hard to reinforce the messages of the performance, at times it is distracting due to being somewhat out of sync and awkwardly placed.

The narrative guides the audience through what is probably a normal night in a strip club, with the three women alternating between monologues, interacting with their rather seedy clientele, and dancing on the pole at the back of the set.

While the intention behind this narrative is clear and well thought-out, it’s execution is bumpy. The narrative doesn’t quite flow as fluidly as it could, resulting in the audience often getting lost amongst different characters and their storylines. One of the more interesting moments is Coco’s comment on the theatre and entertainment industry, and the lengths that performers must go to simply to support themselves. This theme could be explored further.

Overall, though there is a vast amount of potential in the concept, there is a lot of room for development. Perhaps moments of absurdism could emphasise the strained relationships between the dancers and their clients.

She’s Diverse are an incredible company producing amazing work by women, for women, so it will be interesting to see how Angels and founder Valerie Isaiah Sadoh’s other work develops.