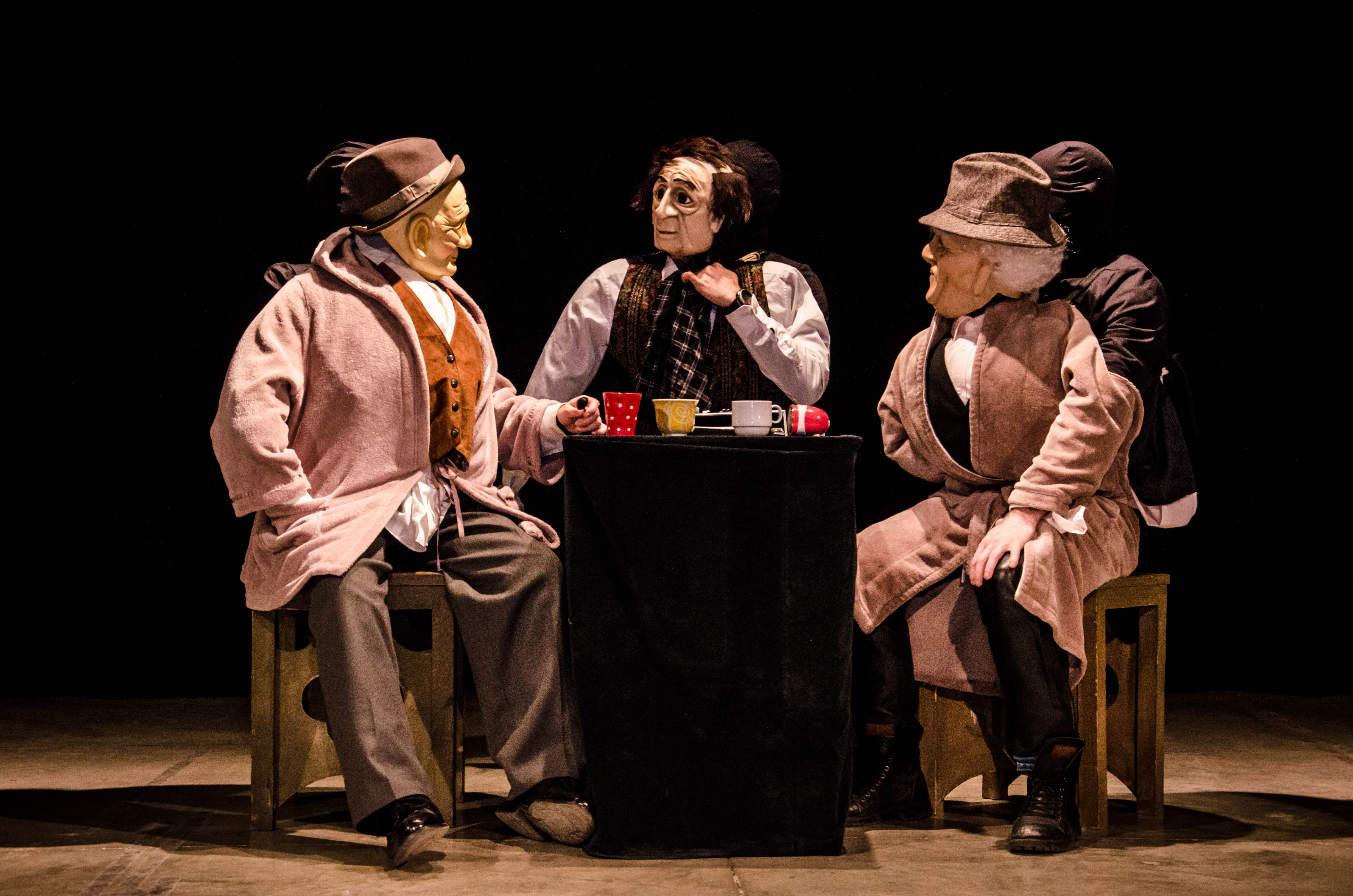 Georgian production Paradiso is a tragi-comedic exploration of ageing and death in puppetry form. Three older men in some sort of hotel or guest house gather around the cafe’s table, drinking tea, making music and perving over the landlady. They are full-size, wearable puppets with creased faces and softly bulging chests, clad in dressing gowns over their clothes. Their love interest, though not a puppet, has a grotesquely exaggerated bosom and backside. The attempt to make her more of a cartoon is successful, though unjustified. She firmly brushes off their disgusting objectification of her, and they unfortunately go unpunished for it. The process they go through to get into heaven is largely straightforward; it’s disappointing that this show doesn’t feel their lechery is enough to warrant eternal damnation.

The #MeToo movement is impressively represented on stage this year, with Jet of Blood building up to a confrontation of an American man’s real-life rapist. A pair of performers use masks and movement to explore relationships, power dynamics, sex and arousal, though consent is an inconsistent theme and it’s not initially clear that the woman is playing a man – nothing is done to make her movement or appearance stereotypically masculine. The closing image is the most confrontational and powerful, though not all of the moments leading to it provide clear, dramaturgical support.

Movement is used heavily in Jet of Blood, though with much less polish than in 5 Days Falling. A young man has had enough of the world so embarks on a restorative trip without telling anyone. The calm of his surroundings is regularly interrupted by voicemails from well-meaning friends and family that he does his best to ignore. Lengthy movement sequences grounded in street and break dancing are executed with liquidity, though little stylistic variation means what is initially a meditative effect eventually wears off. The recorded voicemails add some context but his physical responses to them are minimal and indistinct.

Two further shows are much less reliant on physical theatre, instead they use more linear, text-based storytelling and Greek myth. Heather & Harry, a three-woman show reminiscent of RashDash’s style, uses live music and exaggerated displays of gender to tell a story of choosing love over immortality. Heather is in an abusive relationship with Zeus and fascinated by the mortals who frolic on the land below her. The jealous Zeus, unhappy with her divided attention, banishes Heather to London on the condition that if she touches a human, she will become mortal and never be able to return to the land of the gods. Multi-rolling, a snarky pianist, dance and subtle feminism combine to make a funny, though fairly simple, show. There’s scope for more sophisticated storytelling devices to be used, but there’s a solid foundation already in place.

Aphrodite and the Consumer Gods shows another goddess that ends up on earth. The sexy, confident Aphrodite gets pulled into humanity’s preoccupation with unobtainable beauty standards and social media fame. Instagram and reality TV are criticised for their impact on women’s self-esteem and body acceptance, though without much subtlety. The good and evil dichotomy portrayed by Aphrodite and a TV executive has no shades of grey, though there is certainly no ambiguity in the show’s message.

Of these shows, Paradiso and 5 Days Falling are the most visually stimulating and slick, but Heather & Harry is the most fun and the least aggressive with its message. Though this sample of their programme is distinctly different in form, style and quality, Zoo is showing a clear commitment to progressive work using physical theatre and movement.