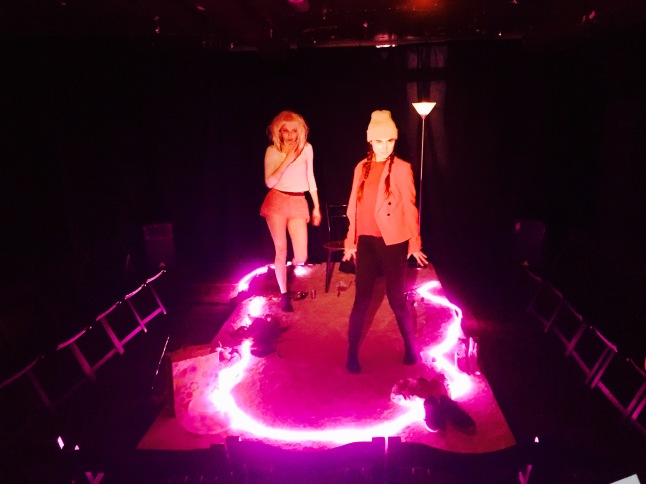 The fetishism of absorbing someone else’s life and making it your own is the theme explored in Swifties, particularly how to give your world meaning when everything seems so dismal. The play puts in to question why celebrities exist – is it for people like Nina and Yasmin, whose obsession with their idol Taylor Swift has totally taken control over their own identity?

Throughout the performance I don’t see the world of the play. I can understand and recognise the characters, but where we are is not clear. Something feels off throughout; the stakes are not high enough. The dialogue is natural and certainly conversational, but the play does not feel genuine. The storyline is odd and the resulting narrative is weak. It doesn’t make sense at times and to call it an adaptation of The Maids is a bit of a stretch. It is as if the writer Tom Stenton panicked halfway through his writing process and threw random things into the story to try and have it make sense. It doesn’t.

The two actresses, Isabella Niloufar and Tanya Cubric, work tremendously well together and it is clear that there is an enjoyment they both share performing in this piece. They respond to each other in a way that makes the dialogue flow with natural ease. It’s evident that these two are gifted at their craft – both of them find it easy to slip into a childlike and playful manner when roleplaying as Taylor and one of her squad. In the roleplays their acting was amateur, but that is intended. In their roles as Nina and Yasmin they shine, and their precise delivery effectively demonstrates the dominating and submissive style relationship of the friendship duo.

Niloufar is playful and expressive in her role. Contrasting this, Cubric does especially well conveying the media’s stereotypical representation of a narcissistic and tiresomely annoying Taylor Swift. The characterisation is superb; the accent isn’t there but it doesn’t matter. Halfway through the performance I started to believe it was Swift on stage.

It is a shame that the quality of the script isn’t at the same high level as the performances on stage – these two actresses deserve better. The direction, despite being flawed at times does hold up as commendable overall. There is potential in this production, it just never reaches it. Swifties is an amicable viewing experience that doesn’t challenge its audiences or really inspire them, but if you’re interested in an easy watch with strong acting then I would recommend going to see it.