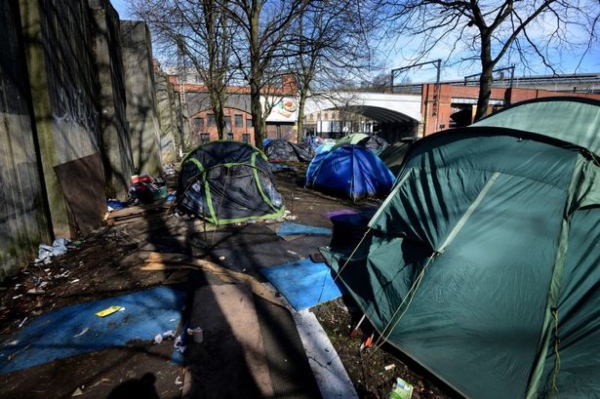 Ebi, Bess and Hannah are homeless, living in tents in Archway. The three have a mutually beneficial relationship – nineteen-year-old Hannah has older and wiser people looking after her, and her doe eyed youth brings in a lot more money from their begging trips. The three are happily ticking along until Caz turns up. Another homeless young woman, Caz has a magnetic presence that either draws people to her or repels them; there is no in between. The new group dynamic is tense and dangerous, with the very real sense that anything can happen.

Introducing a radically different character into a group is an effective device by writer Oli Forsyth. Caz is also his most developed character – and phenomenally performed by Madeleine McMahon – who causes disruptions that range in size and intensity. Hannah (Isaura Barbe-Browne) and Ebi (Andy McLeod) are awed by her magic tricks and charisma whereas Bess (Helen Belbin) can’t stand her.

The moments of high tension between them are some of the best in the play, along with those where Caz mesmerises the other characters with her tricks and manipulation. Forsyth doesn’t quite nail the ending though; he abandons the story before it comes to a natural end. With Caz such a strong character and the driving force of the climax, the other characters feel less developed – particularly Ebi.

Director Sam Carrack employs a speedy, consistent pace that occasionally glosses over more important moments, but captures the repetitive, hand-to-mouth existence of the characters. He takes more time with Forsyth’s dialogue about homelessness and the benefits system even though they are a tad overwritten. There’s no shying away from criticising the government, but neither is the script dominated by its agenda – a smart move.

McMahon’s performance is the highlight of Kings, and even though the script and pace could use a bit of tweaking, the story it tells is engaging. Forsyth clearly has an intuitive ability to develop detailed characters and contemporary stories showing the remarkable within the everyday.