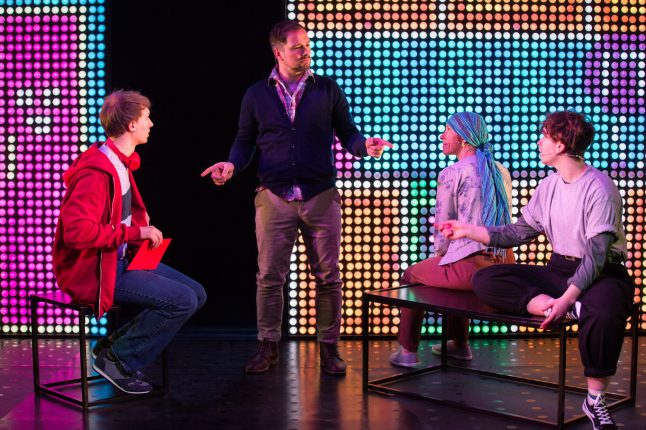 This is an ambitious, interactive new video-game inspired musical, melding a tale of the trials and tribulations of a contemporary family with an 8-bit video game aesthetic. Each audience member is given a ‘controller’ (a bit of card which is blue on one side and red on the other), and at certain points in the narrative, they gets a say in what direction the plot turns. Towards the latter part of the show, the narrative rewinds and you see all of the alternative paths that could have been taken.

The musical’s strong point is the depth of its well-drawn characters. The four family members, Owen and Alice and their two children Aiden and Ellie, are a distinctive family unit. The production is driven by the cancer diagnosis of Alice, and follows the reaction and effects this has on the rest of the family. It shines a light on the tensions between couples having to battle the unimaginable, but its also a beautiful coming-of-age tale, interweaving the personal growth tales of the teenage kids. The plot covers an impressive amount of land in the space of an hour, and the cast are a strong squad of actors to tackle the twists and turns. I particularly enjoy Max Alexander-Taylor as Aiden and Aitch Wylie, who portray the most visceral, complex, and lovely sibling relationship.

The LED screens which form the set are impressive: the graphics are exceptional, and the 80s arcade–game vibe is SO COOL – but they’re bit gargantuan for the Vaults. If you’re in the front half of the audience, it’s quite an ask to be facing brightly lit screens for lengthy amounts of time. Maybe this is a bit grumpy, but I have poor eyesight, and it effected my enjoyment a bit. It would be less of an issue in a larger venue, which with some development, I hope Stages is able to have.

It warms my theatre-nerd cockles, though, to see such an ambitious, ‘all-in’ approach to a festival show. Director Adam Lenson and movement director Christina Fulcher have achieved something special in the simplicity of the action and movement of the actors. It counterbalances the eccentricity of the set, allowing the nuance of the characters to take centre stage when there’s a lot (visually) going on in the background. Christian Czornyj’s book feels fully formed, too. Elegantly weaving together multiple narrative paths is no mean feat.

As with many concept-driven musicals, Stages isn’t perfect, but it would have so much room to grow if it has further life. It puts a spring in my step to be reminded of how exciting new musicals can be, and I admire any team that lead with ambition.

Stages has finished its run.