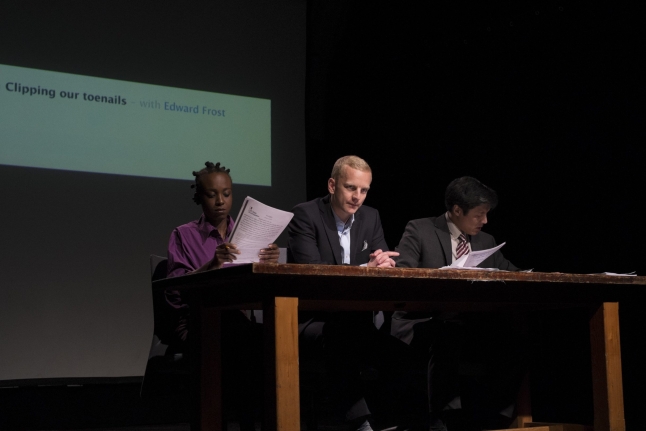 For thirty minutes, we are party to a board of Immigration Officers dissecting the authenticity of a young couple’s relationship, one of whom is seeking asylum. All we see of the couple themselves is videographer Guy Wilkinson’s projection of photos and online personas onto the back wall.  From old text exchanges and Facebook statuses down to receipts from Ann Summers, the level of critical examination is unnerving and eye-opening. As immigration lawyer Diana Baxter later explains during the after show panel discussion, the personal, deeply vulnerable, and sensitive nature of a relationship is the very thing that you have to impersonally present as part of an application.

What Border Control starkly presents is how each case can fall prey to the personal bias of the officers dealing with it. Throughout, the underlying sense that this isn’t going to end well prevails, and I can’t help thinking that had I seen the play when it was first written five years ago that I’d have viewed it with an awful lot more hope and optimism, despite the eventual disappointing conclusion.

Sewell’s tight writing and the direction by Olivia Furber have made light work of what could be a particularly dense text, with the application detail and terminology easily understandable thanks to the pacing of the ensemble’s delivery. Each cast member is compellingly watchable and sharp. The decision to frame the narrative through the bureaucratic process sheds much needed light on the immigration and asylum seeking process, which is only made stronger and more impactful by the panel discussion that follows. Chaired by radio broadcaster Paul Gambaccini, the panel was also made up by the playwright Michelle Sewell, Green Party Home Affairs spokesperson Shahrar Ali, chair of Young Europeans, the3million and UCL researcher on attitudes towards migration Alexandra Bulat, and Sarah Entwistle, nurse practitioner with the Health Inclusion Team at Guys and St Thomas NHS Foundation Trust.

Unless a more humane approach towards immigration is taken by the government and the press, more families will continue to be separated. This isn’t a revelation, nor was it a new idea five years ago, but through shows such as Border Control continuing to be programmed, more people will be able to understand the current situation and move forward with more compassion and understanding.