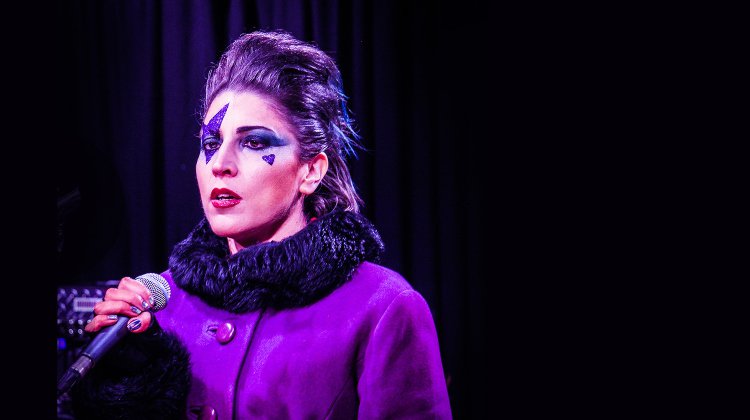 Two women are sitting on the floor in the corner of a north London pub’s function room. One gently rocks a chair back and forth with her hands, while the other one watches. The former is quietly focused, the latter grins and nods encouragingly.

If this moment was photographed, it would be difficult to identify the reality of what’s happening. I’d probably guess it was two friends chatting about something quite serious. Most – if not all – womxn would recognise the relaxed yet vulnerable postures that are often adopted when close friends are sharing something sensitive or important, usually curled up on a sofa with a glass of wine or cup of tea in hand. The image evokes a warming feeling of comfort that comes from knowing you are completely heard and valued, and freeing to know you can say anything in these moments of safety and support.

But in this instance, it’s director Elske Waite guiding actor Charlotte Eyres through the briefest of moments within a short scene for Tinted, a one-woman play by Amy Bethan Evans being revived at VAULT Festival. They didn’t know each other before this production; Eyres was cast through a self-tape. Eyres intently focuses on the tips of her fingers, using the smallest of movements to keep the chair from tipping over. Waite wants her to find the point where the chair nearly falls and use the lightest of touches to keep it upright. Yet, Waite’s warmth and support is tangible, and demonstrated by literally bringing herself down to the performer’s level. Rather than watching from an elevated distance, she gives the sense of a collaborative working method rather than a hierarchical one.

Unless it’s a well-known play by Shakespeare, the Greeks, a modern classic, or you’re familiar with the script, it can be hard to determine where the director’s influence begins and ends just from watching a performance. How much of what you’re seeing is the instinct of the actors or designers, or written explicitly into a script? It certainly can’t be generalised about, what with the range of practices and techniques out there. A statement that often gets batted around a lot is that “the best direction is invisible” to the audience. Though this doesn’t really apply to styles outside of realism and naturalism, I wonder if there is some truth in it. But only a little bit. I’m inclined to say there isn’t, particularly as more and more post-dramatic theatre is emerging in the UK. In more European, auteur-led theatre, direction is writ large with the production concept at the forefront.

This rehearsal demonstrates that Waite is certainly applying a concept, much of which is her own rather than coming from the playwright. Apart from the spoken text, the script has little else to it – I read it the week before – but many audience members probably won’t have, and so won’t know what work is hers or the writer’s. Though this isn’t a rehearsal focusing on the design so I don’t get to see any samples of these elements, Waite says she will be using a lot of sound, lighting and projection to help tell the story, and is currently crowdfunding to integrate access provisions. Waite has also dramaturgically analysed the script, a common task for directors who aren’t working with a dramaturg. The choices she made are clear, they are also useful in terms of breaking down a continuous monologue into distinct sections. During a break, she reminds me that the story takes place over a large period of time, showing the character of Laura from four years old through adulthood. Waite has broken the monologue into small scenes, with each one assigned to one of four colour groups according to the age of the character at the time. There are four colours – today they are focusing on the blue scenes, which show Laura at her youngest.

Over the course of the day, Waite shapes and refines Eyre’s choices. Eyre is off-book by this point and they have done some rudimentary staging in earlier rehearsals, but Waite now wants to give it specificity and further explore it. She is also beginning to bring other creatives into the process; today a movement director heavily contributes to the work. Waite closely oversees everything though, usually with approval. It reminds me of a production dramaturg’s process, from which it isn’t that far removed – except that the dramaturg also includes the director’s work along with everyone else’s contributions. Waite shapes the creative practices of the actor, the designers and the movement director. From the creation and application of a concept to the design elements, her dramaturgical work, and the performance, it is clear she approaches her practice holistically whilst maintaining control over all elements. Yet, she’s not strict or overly-dogmatic. She has a clear style, tone and message in mind that she wants to convey to her audience, and she nurtures and coaxes her team to do that together through a receptive, benevolent authority.