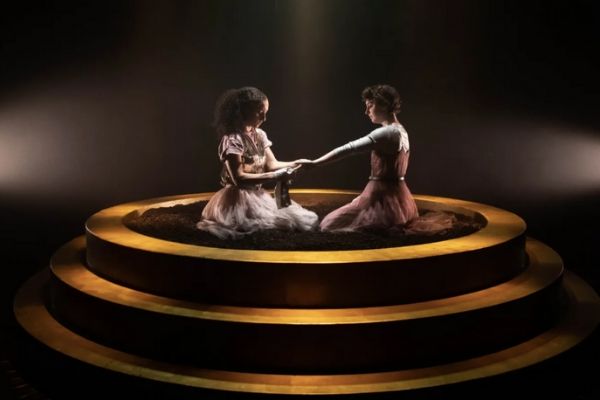 In 2018, Lulu Raczka’s A Girl in School Uniform (Walks into a Bar) showed her talent for writing compelling, teenage girl characters. In a world that’s so keen to criticise and dismiss young women and their interests and emotions, Raczka’s writing legitimises them. By putting them in life-or-death scenarios, she shows they are empathetic and capable of making huge decisions that shouldn’t be made by anyone other than those much older than them, but they can still like boys and partying. This two-person take on Antigone zooms in on young sisters Ismene and Antigone, social outcasts due to actions by others in their family and who are forced to grow up much too quickly.

Like Sophocles’ original play, conflict comes from Antigone’s determination to bury her brother Polynices’ body, and those around her not wanting her to. He started a war against their other brother and the city where they live, then dies in battle, so a royal decree states that anyone who inters his remains will be killed. Before his death, we see Antigone and Ismene happily role-playing as adults who go out drinking in bars and have sex with men. It’s fun and childlike, and Antigone clearly has the upper hand. This dynamic is destabilised once she decides everyone, no matter how good or bad, deserves to be respectfully buried and she is willing to face the consequences of having integrity.

It’s in this act that youthful impetuousness comes to the foreground and juxtaposes the childlike games of make-believe with the real possibility of death. Raczka deftly navigates this shift, though the tension that naturally emerges creates repetitive  arguments that slow down the story’s progression. Whilst both sisters articulately make their arguments, its clear that neither is going to change their mind and what with the story fairly well-known, it drags out the inevitable.

Annabel Baldwin and Rachel Hosker are totally convincing as Antigone and Ismene. They capture this tricky, watery age so well by being believable as both children and adults. Their relationship is loving, playful and prickly, and the both throw themselves into Lizzy Leach’s tactile set consisting of a small pool filled with some kind of grit that coats them with black smudges. We get to know them well, and by being the sole characters we see, the reclaim classical theatre for women who are – more often than not – marginalised.

Though the script could be a snappier, the chemistry between the performers and the sharp reinvention of the classical text make for good theatre, particularly in regards to showcasing the capability of teen girls and reinventing patriarchal stories.