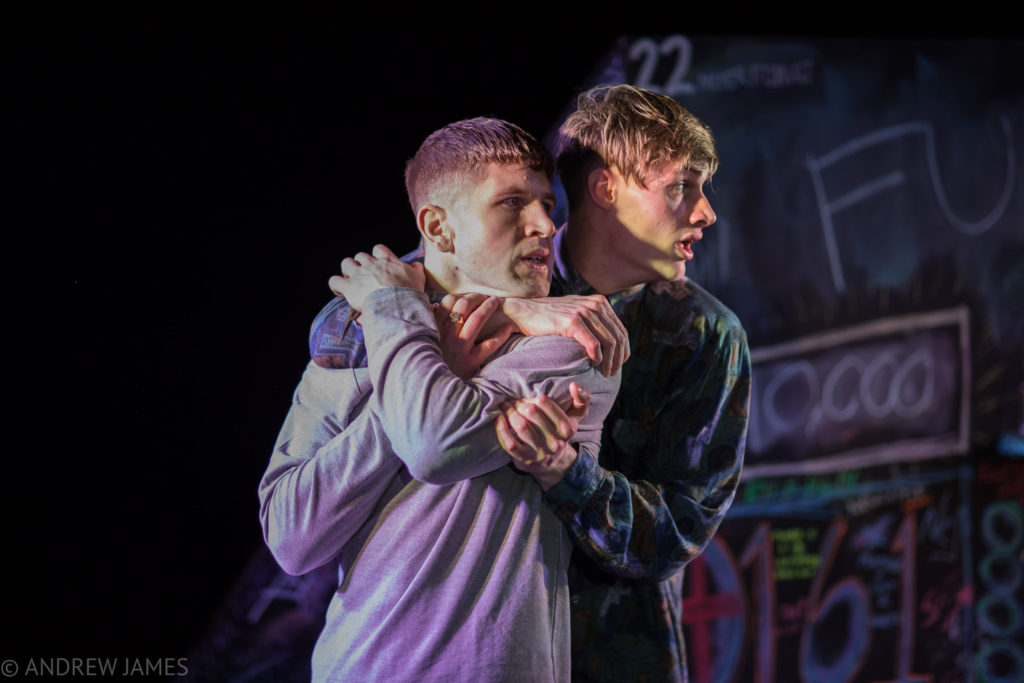 Mossy is only 22 but he’s tired of life. He can’t shake the feeling that there’s nothing more than this, so the best option is to call it a day and kill himself. His only concern is that his mum won’t be able to afford his funeral, so he convinces his reluctant mates to launch a fundraising campaign before he goes. Touching on toxic masculinity, male friendship, euthanasia and voyeuristic media consumption, this new script has some clumsy writing but the themes that propel the action forward to a surprising end smartly support the story of friendship.

The group of four working class lads from up north behave like typical young men – they play video games, plan beach holidays, talk about girls and football. There’s also plenty of banter, so when Mossy first quietly declares he’s going to kill himself it’s turned into a joke by his three mates. With time and repetition, they begin to cotton onto the truth of the sentiment, but the group’s inability to display and empathetically receive vulnerability is stunted and repressed by a culture where such emotions are ‘unmanly’. Though not explicitly commented on within the dialogue, these dangerous expectations are shown to put lives at risk through the way his pals respond.

Though the socio-political issue of euthanasia is brought up in global news broadcasts as Mossy’s GoFundMe gains traction, it’s not investigated much further – it’s a lost opportunity, though one that could be taken up if there are plans to extend Amy Guyler’s script. Mossy’s refusal to seek medical help and the increasing pressure his pending, promised death has on his friends are given more time, and these moments are deeply saddening. They’re a striking juxtaposition to the moments of intimacy the group does achieve, and the liberal use of witty jokes.

Kyle Rowe, Matthew Woodhead, Josh Sinclair-Evans and Jonny Green are a bouncy, energetic ensemble and great fun to watch. Their friendship is convincing, as is their confusion and inability to cope during hard times. Kudos to director Alistair Wilkinson for channelling that energy into focused work that supports the script and effectively lays bare the problems with modern masculinity.