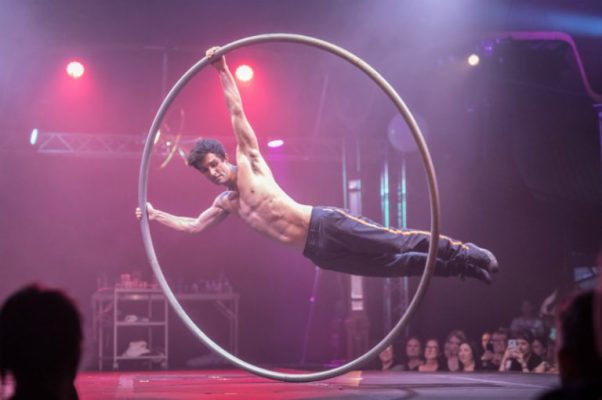 Elixir’s programming at Edinburgh Festival 2016 packed out the purple cow and Thomas Gorham, Rowan Thomas and Cal Harris filled the expansive space with charisma and flying bodies. Playing to a much more intimate audience in the Underbelly’s Spiegeltent this year, Australian company Head First Acrobats carefully adapt their relationship with the audience which is bought right up close to a whizzing cyr wheel and regurgitated tonic water.

Elixir is great fun for the late-night slot on the Southbank but could happily take an earlier space without too many adaptions. When I am watching Head First Acrobats I feel like I am part of the group. Their boyish banter is naughty enough to make me laugh and friendly enough not to insult my feminist integrity. The focus on male comradery that underpins the plot and characters make for a warming piece with just enough weird sex appeal to make enjoying it feel like a guilty pleasure.

The idea of an all-powerful mother voice booming over the stage, controlling the performers and carrying out human testing is not far off contemporary woes about big data but is fantastical enough to allow a fictional world to evolve which gives the three dummies agency, personality and test tube loads of humour. The first elixir gives the performers mighty strength displayed in acro-balances that move so fast the stick figures in my note-book are a blur. Particularly memorable is a body diagonally counterbalanced from his base with the ability to bend over in mid air with a strategically placed balloon behind him. As Rowan is knocked out and falls like a plank of wood into the audience the back seat seems like the safest option!

Cal Harris balances a figure on his head- head to head with no arms and legs spread. This star shaped composition is recreated later with Thomas on the trapeze- within a show packed full of testosterone and F-words, these moments are of true beauty. Each pairing becomes one organism- one giant body with limbs at inconceivable angles and a sense of suspension that peaks and troughs with unforced ease. Cal’s pas de deux with a ladder is equally sophisticated, even if he is performing a tango with a lump of metal. He pirouettes on its point handstands at the top and almost floats with his head in the rigging, he even manages to counterbalance himself horizontally as if the ladder was somehow holding on to him.

The banter around taking clothes off and a peck dancing competition refreshingly pokes fun at the over used and over styled nature of stripping that often happens in circus shows. Rowan learns an important lesson about when not to swallow but Thomas pays the price of being turned into a zombie. Rowan plays the heavily drugged and intoxicated specimen in his weighted, off-balance dynamic on the cyr wheel. Rowan’s relationship with the wheel plays with who is in charge. His mastery of the prop and his ability to allow it to dictate, chase and feel like its controlling him reveals sophistication beneath the silliness. As he spins and rotates, in time with the music, the wheel is riskily close to his encircled and enraptured audience who all miss a breath as he hoola-hoops this giant heavy ring around his waist.

Thomas’s breakdancing zombie produces countless variations of windmills before he is hypnotised by Rowans contact juggling with a crystal ball. The whole show comes to a climax with a teeterboard act performed in suspenders and stockings which all makes complete sense. Elixir is a good fun show and I leave with just one recommendation. Everyone knows to kill a zombie, you have to shoot it in the head. Head First Acrobats are performing a family show for ages 3 and up, also part of Underbelly Festival. I look forward to seeing the X-rated zombies take on new personas as dysfunctional, child friendly pirates.