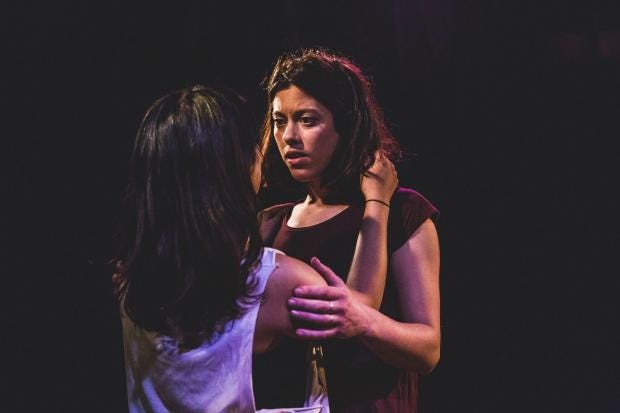 Toni and Madeline are happily settled in their North London home, but Madeline is missing something. From a young age, she has looked forward to being a mother. Now 32 and snuggly coupled, she thinks she’s running out of time to conceive. But as lesbians who can’t afford clinic fees, it’s not so easy. As her biological clock ticks, her desperation drives her to commit an appalling act of deception.

Frankie Meredith’s script has a solid, viable core, but the short, episodic scenes spanning a long time period make for a skeletal whole that feels like the first act of a longer play. If the current ending were to be kept where it is, an additional half an hour of material would make this feel like a significantly more substantial piece. There are several unanswered questions arising from minimal exposition, and a lot of necessary information is told in scenes after it happened rather than shown in the moment. Meredith finds a great balance between humour, grief and poignancy, but the script is too short to give the story the space and depth it deserves.

The cast of three are excellent. Peyvand Sadeghian is a driven and resourceful Madeline, but a live-wire with a skewed moral compass. Her intentions are good and she has a lot of love to give, but lacks the maturity to deal with her desires. Harriet Green is Toni, Madeline’s doting PE teacher partner. The two have known each other since school, and the performers have the chemistry to convince that’s actually the case. Madeline’s ex-boyfriend’s dad, the cerebral and lonely Michael, is played by Cameron Robertson. His storyline and relationship with Madeline is underwritten and has the potential to fill in a lot of the narrative gaps in Madeline’s past.

It’s great to see the issues surrounding fertility recontextualised to a gay couple, and there’s a blatant lack of theatre about lesbians and bisexual women. As Madeline points out, it’s not as easy as just deciding they want kids. Meredith’s script sensitively showcases this issue within the vehicle of a troubled, manipulative character that makes for compelling, if sparse, viewing.