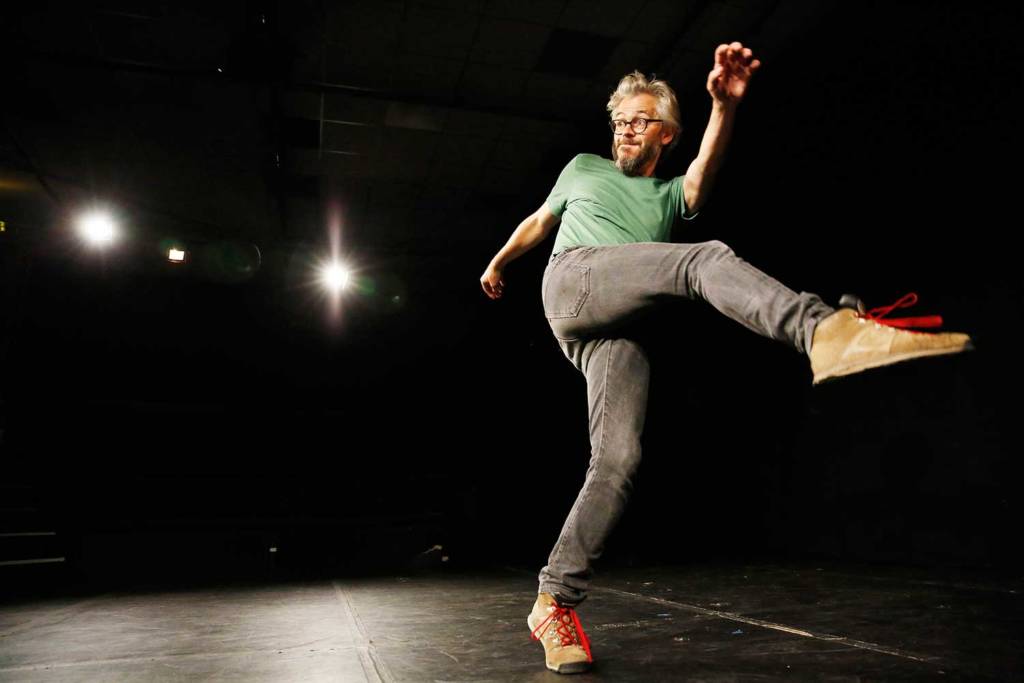 Shon Dale-Jones and Hoipolloi’s Me and Robin Hood has admirable intentions in aiming to raise awareness and money for charity ‘Street Child’. Dale-Jones’ one-man show is a personal narrative, part biography and part discussion on class and wealth divisions in Britain. The mythical medieval do-gooder is a central figure in the piece, an inspiration and obsession for the socially conflicted Dale-Jones.

Dale-Jones is certainly a master storyteller, and the Royal Court upstairs audience are enthralled by his manic, and sometimes frightening, performance energy. He tells stories about his childhood in 1980s working-class Anglesey, focusing on his eleven-year- old self’s plan to rob the local bank. These are juxtaposed with the story of an apparently recent arrest – though it is hard to decipher what is fact and fiction in Dale-Jones’ yarn. It’s a dramatic structure that demonstrates the writer-performer’s bardic proficiency.

Several physical sequences punctuate the piece, acting as the glue holding it together. A scene depicting the Anglesey Junior League Champions Cup final is riotously uplifting, as aided by Dale-Jones’ expert delivery. His later attempt to embroil the audience in a cashpoint robbery is harder to sit through. His aggression toward the capitalist establishment often manifests as aggression towards the audience, and an awkward, perhaps intentional, tension looms in background of the whole show.

However, the main awkwardness lies in Dale-Jones’ confused political sentiments. The show’s simplification of all authority figures, such as bank managers, train conductors or police, as cyphers for an evil capitalist agenda doesn’t sit right. For example, his grandmother, a product and supporter of the welfare state, is improbably saintly. His friend Dylan, a boy whose father has trashed their TV to avoid paying his licence fee, is equally two dimensional in representing a noble, honest poverty. Clearly Dale-Jones has chosen Robin Hood as a relatable, universal class-warrior, and thus an excuse for such obvious character dichotomies. Yet this doesn’t quite work; a scene recalling an interaction with the adult Dylan, peppered with Dale-Jones’ class guilt, plays as deeply patronising.

The most interesting and complex character is Dale-Jones’ Thatcherite greengrocer father. However, Dale-Jones’ diatribe on the gratitude he never displayed to his father for the sacrifices he made to send his son to a fee-paying school, is hard to sympathise with. The teary -eyed delivery, employed a few times throughout the show, is manipulative and contributes to a muddled political discourse. When Dale-Jones is, rather implausibly, diagnosed by a court appointed therapist as a victim of social mobility it’s hard not to raise an eyebrow.

This is not really a show about child poverty, but rather about Shon Dale-Jones and his, not wholly unfounded, sourness towards the British class system. The piece is sometimes trite, but not without charm too. Dale-Jones is sincere in his performance, but the show is dominated by his ego. However, it is likely to move audiences and hopefully encourage an engagement and discussion on the troubling rise in wealth division and poverty at home and abroad.