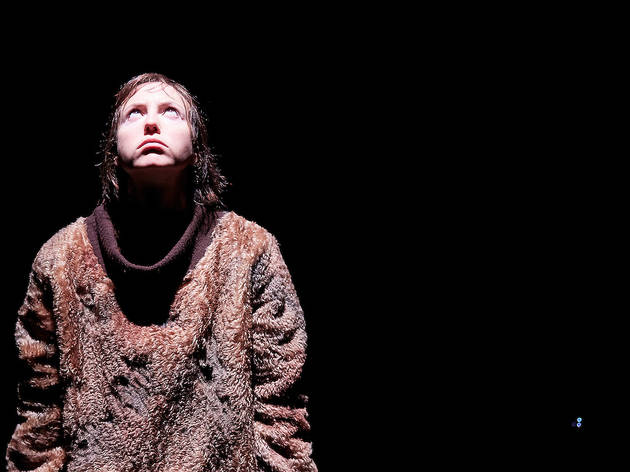 Sami and his mum are preparing for her to go to Mars for years and years and years. Both obsessed with space, Sami’s proud of her but worried that he might never see her again. To help him come to terms with her imminent departure, mum buys him a book about Laika, the first dog to go to space.

As Sami learns about the Russian street dog who was launched into orbit on Sputnik 2, Laika and Sami’s stories of melancholy, fear and hope intertwine. Narration, physical theatre and object manipulation form an emotionally honest and mature performance for young people.

Josie Daxter is the anxious and perky Laika, with a bouncy, unpredictable energy that reminds us to find joy in our everyday experiences. She is tempered by Nima Taleghani’s Sami, a young man struggling with the conflict between excitement and worry for his mum’s adventure. Anna Martine Freeman as Sami’s mum Val is confident, maternal and pioneering – a great role model for young women.

Co-directors and writers Bryony Hannah and Avye Leventis draw on an impressive range of styles to tell their story. They achieve a tightly controlled visual landscape full of surprises and the disarming sadness of growing up without being messy. The geometric set is in turn Sami’s bedroom, mum and Laika’s training modules, and an attic with a telescope. Imagination and reality, and past and present collide through man’s ambition to escape this mortal coil, and are channeled cleverly into this script.

The only moment that doesn’t sit within the established conventions is a brief section of spoken word. Competently delivered, its isolated occurrence is jarring more than a necessary representation of Sami’s youth.

Though the ending is weighted with grief, hope and aspiration are prominent and celebrated. As Sami finds out the truth about Laika and his mum’s missions, he grows up. It’s a moving but gentle message to young people that sacrifice and failure are needed in order to achieve progress.