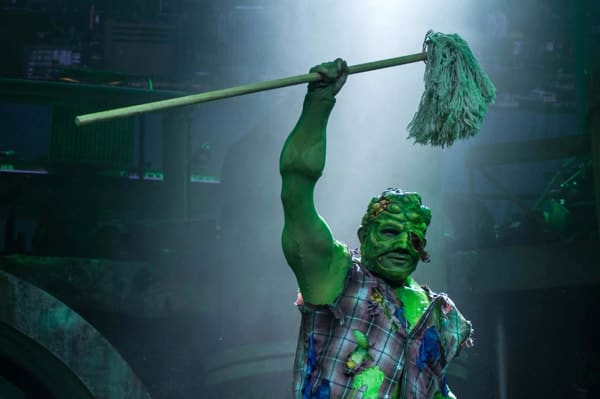 I’ve seen sexist theatre. I’ve seen ableist theatre. But it’s rare to come across a show that is so openly and unashamedly both of these things.

Even more frustrating, these aspects of the story are heightened and played for laughs. There’s no commentary or condemnation, just the worst parts of cult movies rolled into one superhero story reliant on anti-women stereotypes. The performances are excellent and there are some great tunes, but the overtly offensive storyline overwhelms any of the production’s positive aspects.

Science geek Melvin is in love with visually impaired librarian Sarah, but she doesn’t like the feel of his face so isn’t interested in being more than friends. They live in Tromaville, a town in New Jersey across the Hudson from Manhattan. The big, bad city uses Tromaville as a dumping ground for its toxic waste, and Melvin wants to get to the bottom of why this is allowed. Whilst on his quest to uncover the corrupt dealings of Tromaville’s mayor, he is chucked into a reservoir of green goo. Transformed from weedy nerd into muscular Toxie, he embarks on a quest to save Tromaville and get the girl.

Along with the toxic slime that pervades the show, toxic masculinity is everywhere. Sarah is constantly objectified by mediocre men, with the implication that Melvin deserves her affection because he’s the nice one. She is also painted as shallow, not particularly bright and incompetent at her job. But none of this matters because she’s hot. Though it’s great to see a disabled character in a leading role, her disability is turned into a joke ripe for gags, and it’s unclear whether the performer is visually impaired. The character is horrendous all around.

The mayor is also a victim of this patriarchal musical. As the show’s villain, she uses sex to manipulate those around her. This conveys the outdated, slutshaming idea that promiscuous women are bad people, and women rely on their looks to reach positions of power. In the antiquated angel/whore dichotomy, she is unquestionably the whore.

The script veers close to racism, but fortunately doesn’t manage to achieve this low. Instead, there’s a bizarre and unnecessary scene with Italian characters drawing on Super Mario for an aesthetic. Two actors multi-role across all supporting characters and even though one is black, he takes on some racially stereotypical characters. The hairdresser is a particularly close-to-the-bone example.

As shockingly offensive this musical is from one moment to the next, the cast of seven is excellent. Mark Anderson is Melvin, an awkward and angsty young man that goes through a huge transformation. Anderson has a spectacularly, expressive rich voice, but Melvin doesn’t provide much in the way of a challenging character. It’s a shame Anderson doesn’t have a more complex role to get stuck into.

The set, designed by takis, is a marvellous construction of giant, sinister pipes and slimy stairs embedded with Nic Farman’s lurid green lighting. Oversized and intimidating, it evokes a comic book world and all the danger that comes with that. It’s elaborate and professional, but it’s a shame the book isn’t cut from the same cloth.

Whilst there’s certainly value in staging little-known shows, The Toxic Avenger has little to redeem it. Sure, there are some good numbers and in this case the cast cannot be faulted, but the misguided attempts at humour fail to amuse, and instead only offend. This show needs to either retire quietly or undergo a major overhaul.

The Toxic Avenger runs through 3 December 2017.