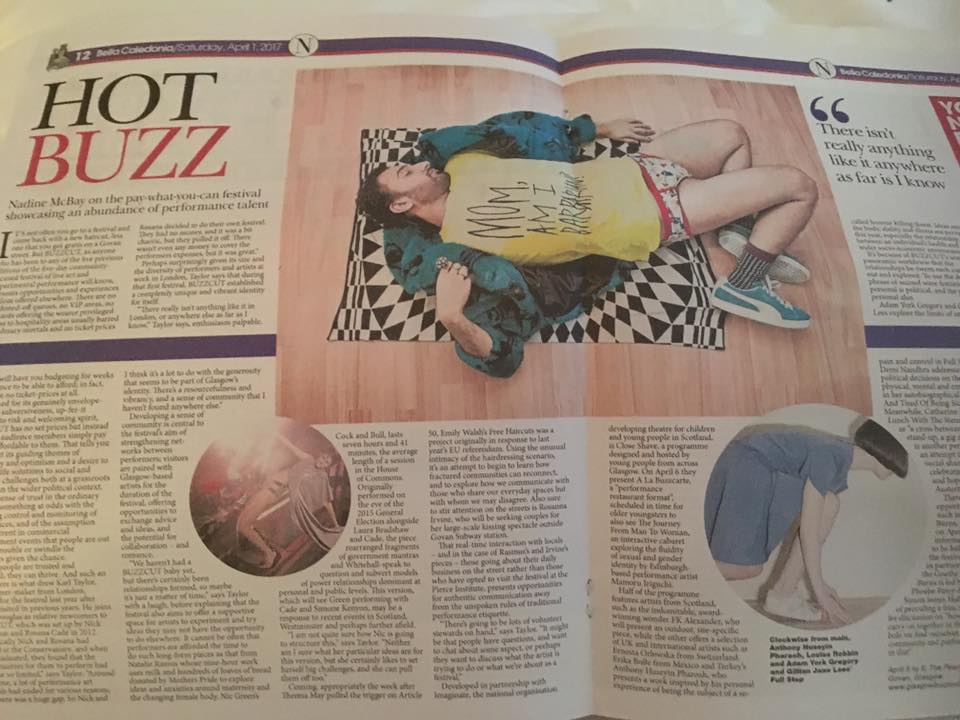 Part of the reason I wanted to come to Buzzcut is that I find it hard to write about live art. I don’t dislike it, far from it – I have a broad but uninformed appreciation of it. But my theatrical home is built from Shakespeare, text-based narratives and the great American playwrights. I’m no Megan Vaughan or Rosie Curtis – I see performance art every now and again, but not nearly enough as I should. So the goal is to see a lot of live art, and write about. The range in styles and approaches is vast and the festival draws live artists from around the country, so it’s a great place to experience this form of performance.

Catherine Hoffmann’s Free Lunch with the StenchWench starts off my second day after a 12-hour sleep. Informed by a poor childhood and austerity Britain, her solo performance is an honest portrayal of the anguish of poverty. Some moments are tough to watch, others are properly grotesque, but the piece rings of truthfulness throughout. The disjointed structure incorporates onstage cooking, a dead rat, songs, multiple characters and personal experience. Her dad’s experience of growing up poor in post-war Brixton effectively juxtaposes contemporary poverty. Back then, everyone was poor and accepted it. Today, young people need the latest trainers, consoles and phones; not having them is a mark of shame. With this factor, it certainly is harder to be poor now, particularly as a young person or child.

Though it doesn’t come up until the end of the piece, there’s an important dig at artists who appropriate poverty and label it “bohemian”. Considering the typical live art audience member is likely to be cash poor but have familial safety nets, an education and a day job, it’s a brave but vital point to include in the show. Poor hipsters and artists from middle class backgrounds don’t have the struggle and social stigmas of those who grew up poor, and it’s easy to ignore. This coda to Hoffmann’s biographical story is one of its most resonant points.

I followed Free Lunch with the Stenchwench with Daniel Oliver’s Chipolataartparty, an interactive timebending experience of participatory ritual. Held in The Glue Factory towards the centre of town, Nick Anderson leads us there like a patient teacher on a school trip. The re-purposed warehouse still feels stark and industrial – the room the piece is in has uneven concrete floors and feels dusty. There are projections on four walls. We are each provided with an emergency blanket and a carrot.

What follows is a clumsy explanation of what Chipolataartparty party is: a process and a destination, a converging of all peoples to start a revolution, an awkwardance, a sex party and a drip. To be fair, all of these things happen, albeit stylised (there is no actual sex party, obvs). But what is the piece trying to achieve? Other than bringing together to see how they react bizarre tasks in an absurd environment, I don’t know – but maybe that’s it.

Though there are several performers aiding Oliver, the piece becomes a study in audience behaviour. Some are fully engaged, following all instructions, including removing clothes to avoid getting wet from the the paraded hose. Others do everything possible to not join in, and the rest are somewhere in between – tentatively joining in with the choreography, not skittering out of the way to avoid the drip. The tech’s influence on the atmosphere is the most impressive aspect of the piece. The rest feels only partially thought out and practiced. A worthy experiment, but one that needs fine tuning.

Ellie Dubois, Peter Lannon and David Banks’ Stuntman is the third piece of the day, a two person study of masculinity, violence and maleness in films. Fight sequences are slowed down to the point they are ridiculous cartoons of themselves. The choreography is excellent despite the in-the-round staging, though they come way too close to the audience. Even though it’s slowed down, it’s not slow motion and a few people would have had kicks to the face were their reflexes delayed. It’s a varied piece that also uses text to examine expectations on men – it’s most compelling element, along with the chemistry between the two performers. There’s a good balance between comedy and seriousness and the work feels fairly polished.

Erika Bulle’s Pieces of Death Meat is my attempted final piece of the day, but part way through the live piercing demonstration in a stifling, crowded room, I feel faint and need to leave. Despite missing the ending what with being horizontal in the corridor, what I did see is methodical and compelling. An instrumental hard rock soundtrack accompanies a black leather-clad man who creates a pattern in a woman’s back with needles, then jewellery. Not one for the squeamish (though little blood is seen), Pieces of Death Meat is reminiscent of Torture Garden.

Stuntman feels the most polished of the three pieces that I saw in their entirety, though Free Lunch with the StenchWench is the most resonant. The variety of the day alone reflects the range of work on show at the festival, and it certainly has material for all tastes, regardless of how familiar one may be with live art.