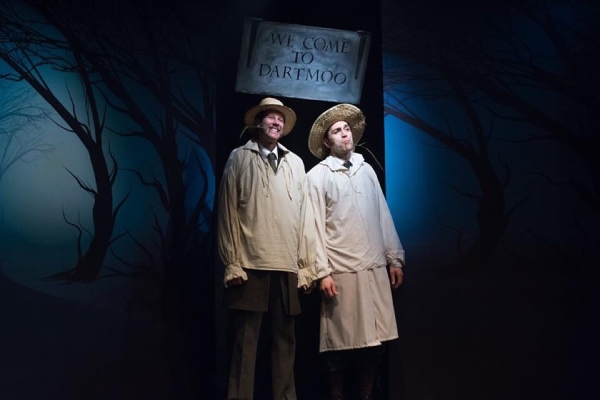 I’ve reviewed several Christmas shows this season and whilst I have nothing against pantomime,  coincidentally none are pantos. Some clearly betray an influence by the distinctly British style, which makes a lovely homage to the season but offer more choice to audiences. Jack Studio Theatre’s The Hound of the Baskervilles, adapted by Steven Canny and John Nicholson, is such a show. Performed by three actors who enthusiastically embrace physical comedy and metatheatre, this surprisingly faithful adaptation is spunky and fun with a few scares, but the performance quality occasionally fluctuates.

The cast directly introducing themselves to the audience and the inclusion of a health and safety disclaimer sets the tone for the evening – goofy, with a bit of danger. Karl Swinyard’s cartoonishly painted flats depicting a scary wood enhance the mood and add a cinematic influence, and there are regular metatheatrical interludes in the story. The script and style play with form and structure, though this is done with skill and panache – it’s never messy. Though there are plenty of laughs to be hand, the story is not a happy one. Kate Bannister’s production strikes a great balance between the dark and the light with plenty of physical comedy but doesn’t shy away from the scarier plot points.

Like panto, this production relies on stock characters for its comedy. Though this approach is often successful, some of the characters are too similar for this to be fully effective – Holmes, Watson and their client Henry Baskerville are all upper-class and urbane, often mirroring each other in comedic moments that can quickly feel repetitive. A trio of white men, though historically accurate, play all roles including the panto dame-esque Cecile. Though this is clearly an homage to melodrama and panto, in such a heightened, representational style there is no need for such casting when London theatre cries out for gender and race diversity on its stages.

The Jack Studio Theatre’s in-house shows are consistently high quality and innovative in form and style. This adaptation of a classic Sherlock Holmes story is a shining example of this, and the theatre’s commitment to new writing and reinterpretations of classics.

The Hound of the Baskervilles runs through 7 January.