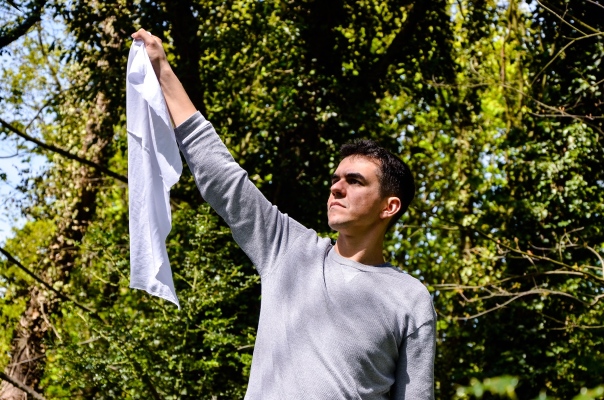 Being an immigrant is hard. Sure, it gets easier but it’s never easy. You are always an outsider, the Other, or that loaded word – FOREIGN. Even though the homesickness may fade and the debilitating attacks of nostalgia become less and less frequent, a niggling feeling of not really being part of the adopted country is ever present. In the current political climate, it’s even harder to fit in.

Xavier de Sousa is a theatre maker, producer and an immigrant from Portugal who knows this struggle too well. In a world that’s both more globalised and polarised than ever, his new work POST quietly contemplates what it means to be a migrant. The interactive, extra-live piece, though anti-theatrical, has a lot of love and a lot of heart, leaving you feeling wanted and valued regardless of where you are from and has power to foster crucial, cultural dialogue.

Much of the performance is about de Sousa and his experiences growing up in a Portuguese village, framed by the wider narrative of historical migration and colonisation. Read from a large book, these sections of the performance are informative and contextual, but less interesting to take in. Though there are extensive monologues, he breaks them up with conversations with audience members. He immediately rallies the audience to him, and exudes a genuinely caring charisma that is undeniably charming.

Food, drink, nicknames and dancing are strong threads used to unite an audience from all corners of the globe. As he talks us through his country’s customs, it provokes contemplation of our own rituals. Though there are idiosyncrasies from family to family, we all bear the cultural stamp of where we are from. It’s so easy to use these differences to alienate, but fundamentally, we all want the same things – to be with our loved ones around a table, sharing a meal and entertainment together. The reminder of these basics is powerful and comforting.

Structurally, there are clear transitions but a bit of clunkiness as de Sousa moves from one them to the next. There will be variation from one audience to the next, though unlikely big differences. This isn’t an issue, but there’s a safeness inherent to the piece in a theatre audience. Considering how societal devision is mirrored in schools due to children likely having their parents’ views, this would be a fascinating work to adapt for an audience of children, or to take into community centres, church halls and the like.

There’s a cosiness to POST that is reassuring in these dark days of the rising alt-right/fascist movement in Europe and the US. Being an immigrant is frightening right now, and it’s easy to feel alienated and unwanted in the face of Brexit and Trump. The show also has the power to unite and provoke conversation, though typically liberal theatre and live art audiences aren’t the people de Souza needs to reach. As much as we may love the work it’s one not especially suited to us – but to those won the right with whom we don’t share our ideals.