Viewed through a contemporary lens, this can be considered one of Shakespeare’s more problematic plays. A woman prisoner forced to marry her conqueror’s leader, a man trying to force his daughter into an arranged marriage, and fairies forcing teenagers and each other to fall in love, are key aspects of the story that can’t be cut and all are framed by comedy. But at Michelle Terry’s gaff, director Sean Holmes deals with the first admirably and embraces the chaos of the latter two in this psychedelic, fever-dream of an interpretation that is colourful, pacey and full of contemporary jokes.

END_OF_DOCUMENT_TOKEN_TO_BE_REPLACED

A man who may or may not be King Edward II finds himself on a stage, with an audience watching and waiting to see what happens next. He has no idea where he is or how he got there, but he’s in good company. Gertrude Stein, Quentin Crisp and Harvey Milk are locked in with him, and they’re none the wiser as well. They all want to get out, but something sinister wants to get in and they can’t to escape until they determine why they’re there in the first place.

END_OF_DOCUMENT_TOKEN_TO_BE_REPLACED

Though King Edward II’s sexuality and the history surrounding his death are disputed by historians, Nick Bagnall takes a definitive stance in Marlowe’s history play. Here, the king is unquestionably gay and unashamed of his love for Piers Gaveston, one of his courtiers. It’s this unwavering love and devotion that gives ammunition to his enemies – a group of powerful barons, Scottish and French rulers, and even his wife – causing his violent and tragic downfall.

END_OF_DOCUMENT_TOKEN_TO_BE_REPLACED Never doing anything by half, Shakespeare’s Globe’s latest rendition of Love’s Labour’s Lost pulls out all the stops with a stellar cast, bringing laughter and joy until the play’s final solemn moments. Directed by Nick Bagnall, this highly energised show is a lovely version of a Shakespeare infrequently staged play, and brings with it a message of true and pure love – and the things we are willing to surrender for them.

END_OF_DOCUMENT_TOKEN_TO_BE_REPLACED 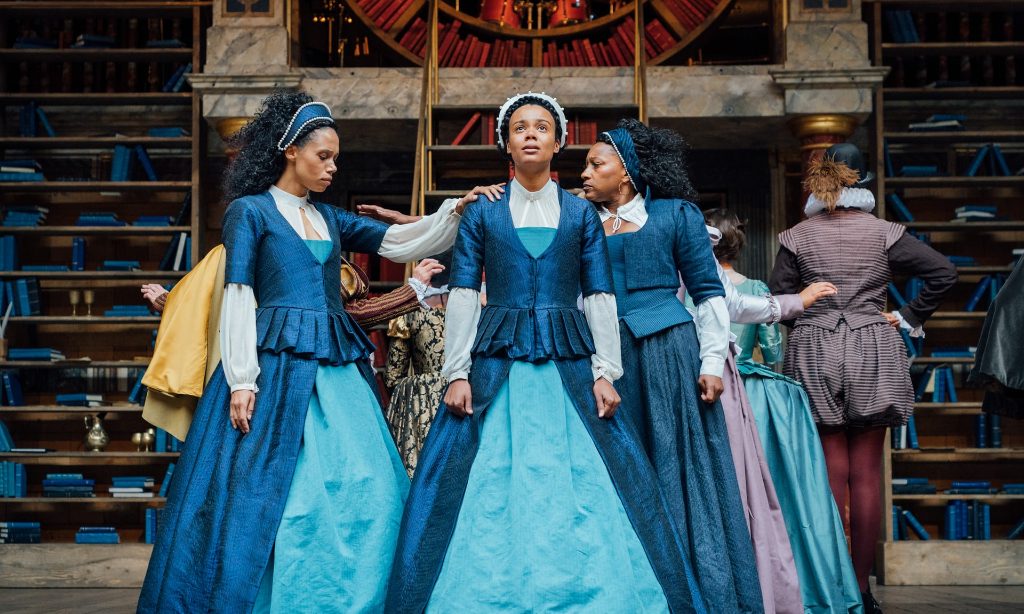 Anger is what I am not allowed to feel.

Most days I wake up, think about the prospect of hiding my anger and dealing with whatever life throws at me, then consider hiding under my duvet. The theatre industry keeps throwing so much shit at women that sometimes the only way we can keep going is by unleashing our rage. Except anger is an emotion often denied to women. So we suppress and suppress and suppress. It’s a vicious circle and it keeps happening. EVERY. SINGLE. DAY. My hope of ever witnessing a true revolution for women in theatre began to disappear over the last year – until this show.

END_OF_DOCUMENT_TOKEN_TO_BE_REPLACED

Who knew one of Shakespeare’s greatest tragedies could be funny? Director and composer Claire van Kampen has tapped into a rare rhythm that sees Iago as a weaselly, clownish man lacking power and finesse, yet still manages to twist Othello into knots. Played by Mark Rylance, one of the finest actors of his generation, his performance is the strongest feature of this production.

END_OF_DOCUMENT_TOKEN_TO_BE_REPLACED

It would be so much fun to be part of Michelle Terry’s ensemble cast that performs both Hamlet and As You Like It to open this year’s season and her tenure as artistic director. They’re having a great time in what are something of a return to the Rylance era of the actor-manager, but uneven pacing and a smattering of interesting but disconnected choices lead to a lack of cohesion that indicates a lack directorial voice.

END_OF_DOCUMENT_TOKEN_TO_BE_REPLACED

Some time in the past, there is an island of disparate peoples happily carrying on with their lives. Each group has its own rules, traditions and customs. Life is hard, but there is order and implicit ownership of lands that they have lived on for generations.

Then soldiers from a foreign nation that they’ve never heard of arrive. They kill many of the natives, rape some and enslave others. Agreements are made that the natives don’t really understand, and as time passes they become second-class people in a place that is no longer theirs.

END_OF_DOCUMENT_TOKEN_TO_BE_REPLACED

Sor Juana is a great writer of plays and poetry known throughout Mexico, or ‘New Spain’ as it’s called in the 1600s. She is a scholar with progressive views on women’s rights and unafraid of expressing them. Juana has also committed herself to the prayerful life of a convent nun. Newly appointed Bishop Santa Cruz seems supportive of her unconventional activities, but the older, more conservative Archbishop Aguiar y Sejas from Spain adamantly opposes her. Her father confessor, Fray Antonio, balances precariously between the two men’s views as Juana faces the risk of a heresy charge and the Inquisition. Outside the convent walls, there is conflict between the church and the secular court and within the convent and the plague is coming. Heresy of Love is a play that operates on many levels both microcosmic and globally. It is blatantly feminist but also looks at how horribly women can treat each other, male conflicting attitudes towards women, and confronts issues within the Catholic church. The script captures the style of Spanish Golden Age plays: deception, politics, religion, danger, love and downfall are present in this intimate and moving play by Helen Edmundson.

An austere, black, metal structure partitions the length of The Globe’s stage between its dominating columns, hinting at the demure, ever-present convent walls. Against the richly detailed paintwork of The Globe and giant canvas prints of a religious painting I probably ought to know, it creates an ominous clash. It also blocks off the back of the stage and access around one of the pillars, but director John Dove and designer Michael Taylor have extended the thrust well into the audience to compensate. Though the set looked lovely and delicate despite its size, there is no need to cover and block off the back of the stage; it is a set in and of itself. Modifying the stage space, while able to give directors more freedom, alters the unique features of this playing space. In this case, the figure-of-eight path around the columns that supports conflict and tension is lost and the actors are placed deep into the round space. The actors are often stationary and so far forward that energy occasionally dips.

Nevertheless, all performances are excellent and, typical of Globe casts, the ensemble is close and completely in tune to each other. Naomi Frederick is a bold, confident Juana with the grounded calm of unwavering faith. Her reduction to a broken victim is heart rending. Her slave Juanita (Sophia Nomvete) provides wonderful comic relief though deliciously funny one-liners. The priests (Patrick Driver as Antonio, Anthony Howell as Bishop and Phil Whitchurch’s Archbishop) complement each other well, embodying distinct characters that capture the humanity behind the robes and inspire hatred from their treatment of Juana. Howell’s duplicity is unpredicted, creating a deeply conflicted character you love to hate. The only casting issue is a blatant lack of diversity. In a play set in Mexico with characters both native and Spanish, there is a glaring lack of Hispanic actors.

Heresy of Love premiered in 2012 at the RSC, but this is its first production in London. It is an accessible, relevant, gem of a play paying homage to Sor Juana, a genuine historical figure. These characters from the past with contemporary relevance are at home at The Globe and remind us that despite the progress we have made in women’s rights, there is still work to be done and we would do well to treat each other nicely along the way, despite any inner demons we battle.

Note: the performance reviewed was a preview.