END_OF_DOCUMENT_TOKEN_TO_BE_REPLACED

Cosmopolitan’s current most-read article is a feature on a $35 maternity dress worn by Megan Markle. This is, as explored in performance artist Paula Varjack’s latest work, an example of post-recession celebrity dressing. Yet mixing a Gucci top with Topshop jeans is a distant dream to those of us who will never be able to afford to wear Gucci.

END_OF_DOCUMENT_TOKEN_TO_BE_REPLACED

We may not be living in a war zone, but everyday life is a series of battles to be won or lost. These tiny fights may be life or death in the moment, but can feel silly, meaningless or absurd from an outsider’s perspective. This isn’t lost on Mikhail Durnenkov, who presents a sample of vignettes addressing problematic aspects of modern life, from mobile phone overuse to airport security.

END_OF_DOCUMENT_TOKEN_TO_BE_REPLACED 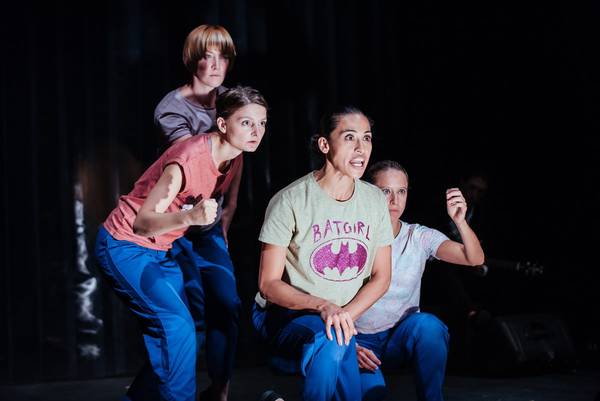 The North American Free Trade Agreement (NAFTA) between Canada, the US and Mexico came into effect on 1 January, 1994. I was eleven years old. The agreement ushered in a degree of national prosperity for all three countries, but Mexico’s low minimum wage, lax environmental regulations and corrupt officials made a perfect storm for sweatshop conditions in the US-owned factories (maquiladoras) taking advantage of the exchange rate and unemployment in Mexican border towns. The maquiladora owners favoured female workers for their diligence and precision and employed girls as young as fourteen, who were better suited for working 12-hour days in harsh environments than older women or clumsy men. These girls, only a few years older than me, were assembling electronics and convenience items out of toxic materials for 39 cents an hour.

I’m American. Though I hide it well with a deliberately constructed accent and uniquely British habits and mannerisms that I’ve developed in the nearly twelve years that I’ve lived here, I still have the passport, the cultural history and the guilt to prove it. Normally that guilt is shaped like guns, healthcare or Trump, but it occasionally takes on other forms. This time it’s privilege. That privilege/guilt pours down my cheeks in hot, angry tears during Theatre Ad Infinitum’s Bucket List. The story of the women and girls’ lives dictated by the maquiladoras, some as young as me, is a horrifying contrast to the suburban middle-class upbringing I had, kept busy with school and music lessons and theatre rehearsals and ambitions. I may have had something that these girls made, some frivolous object bought without thinking in order to make my life easier or better, and I was totally oblivious to their hardship. I did not have to worry about my mother being killed for protesting the maquiladoras’ pollution, or about my auntie being raped by her manager, or getting cancer from the chemicals I encountered on a daily basis.

But for the women and girls in Bucket List, that is their life. The all-female, international cast, directed by Nir Paldi, devised a magical realism story of these desperate factory towns based on an idea from Mexican company member Vicky Araico Casas. Incorporating George Mann’s distinctive choreography and live music, Bucket List tells the story of Milagros (played by Casas), a girl growing up in one of these towns dominated by maquiladoras. Her generation’s experiences and those of her mother’s interweave, creating a landscape of labour, political protests, coming of age and revenge. It is a dense story covering a decade of these women’s lives, but Paldi’s script is easy to follow. Magical realism creeps in stealthily, and only at the end of the performance do certain events seem untenable and raise the question of whether or not they actually happened. Regardless of this fuzzy line between reality and fantasy, Bucket List is an anthem of strength that roars with political agenda and gives voice to the disregarded victims of developed nations.

Initially more of a montage of life experiences, Milagros’ story slowly begins to emerge. This could shift slightly earlier in the piece, but the exposition at the beginning gives wider context and does not feel extraneous. Paldi maintains a careful balance of these women’s lives and a wider, North American political picture that slightly tips in favour of the women, but there is enough of the outside world’s oppression and token assistance to inspire the characters’ rage and passion. Milagros’ tragic end adds fuel to the production’s fury against exploitation that comes out as a roar rather than a whimper.

There is hardly any set and technology on display, a dramatic change from their last adult show, Light. Instead, costume plays a bright but subtle role in the story – the five women playing the girls and their family wear coloured t-shirts with cartoon characters often idealised by young girls. Disney princesses, Batgirl and Alice in Wonderland offer them an American-created fantasy that they can strive for but will most certainly never achieve.

Juxtaposed against these pastel tops are quite vicious games demonising the powerful politicians and corporations that shape their lives. They also mock their working conditions, daily violence at the hands of men and threats to their lives. Milagros’ mother (Deborah Pugh) is a vocal political protester, demonstrating a ferocity also contrasting her character’s clothing. The excellent live score by Amy Nostbakken is more of a direct expression of the fighting spirit and sadness within these women.

Though a text-driven piece, Mann uses a series of motifs that soon become recognisable, indicating specific actions and locations. They enhance the understanding and often act as a substitute for words. Though used regularly, Mann’s choreography is one of the company’s trademarks and is unfortunately underused, especially considering the lack of set.

Even though NAFTA is over twenty years old, the maquiladoras are still there, employing women for long hours, polluting local rivers and creating environments ripe for exploitation. Paldi’s script aggressively demands awareness which may be unpalatable to some, but should be required viewing for every American blissfully unaware of their brothers and sisters across the border that are so often looked down upon with racist disgust. Bucket List is truly vital theatre in our age of disposable, thoughtless consumerism.

I was gutted when I found out Janet Adler and Margaret Gibb aren’t real. The portrait Tim Crouch paints of this fictional couple and their anti-capitalist approach to their art, in striking contrast to a deranged Method actor and her coach making a film about Adler’s life, is so well-formed that they feel that that they can’t not be real. Even though the reality of these characters is so detailed through their dialogue, Crouch’s staging and choreography is wholly unrealistic and often absurd, a work of art in itself. This rigid stylisation, though eventually giving way, rebels against convention just as the characters do. These two sets of characters and the staging battle for dominance in a wonderfully compelling and disturbing commentary on the ownership, commodification and nature of art and its creators.

A nameless student begins with a lecture, and intersperses scenes with a discourse on Janet Adler’s life and work, shaping and contextualising the woman that actor Louise discusses with zealous devotion. Despite these strong feelings, Louise is unmoving, staring straight ahead. Her teacher Sam is the same; though their voices have some emotion, their bodies are rigid as they stare through they audience. Adler’s widow, Margaret, assumes the same style when she first appears. A boy moves any necessary props, wearing wireless headphones with instructions whispered to him by a woman sitting upstage with a microphone. Some of the props are appropriate to the action, some totally absurd. The boy’s innocence and movement is powerfully accentuated amongst the stillness; though he is a child, he has control of all physical action rather than the adults. The sculptural staging with juxtaposed power becomes a thoughtful commentary on art’s relationship with its audience, something Adler may have approved of.

Though the performances aren’t wooden in the least, the distance they maintain through roughly half of the play is frustrating, albeit canny. It works as a concept within a play about art and the detailed characters are built through dialogue, but the initial lack of connection between them leaves a gaping void.

Cath Whitefield endows Louise with a fanatical “I will stop at nothing” attitude that’s both satisfying to look down on and be disturbed by. Her and Sam’s visit to the house where Adler and Gibb last lived and their subsequent choices are a potent critique of the Method acting technique, as well as any other justification of awful behaviour for the sake of making art. Her character’s abrasiveness effectively generates empathy for Adler’s widow Margaret, ferociously played by Gina Moxley, who also shows moving tenderness when faced with the memories of her partner.

The richness of the characters and the feeling that they live beyond this play is the strength of Crouch’s writing, but the messages contained therein are important to consider. Who does art belong to once it’s in front of an audience? Where are the boundaries of an homage to the dead? Who do any resulting accolades belong to? It’s certainly thought-provoking stuff to consider the lineage of the cultural products we consume. Despite all the good intentions in the world, what damage may have been caused in the research and making of that book/film/play/artwork/song that we consume so casually?