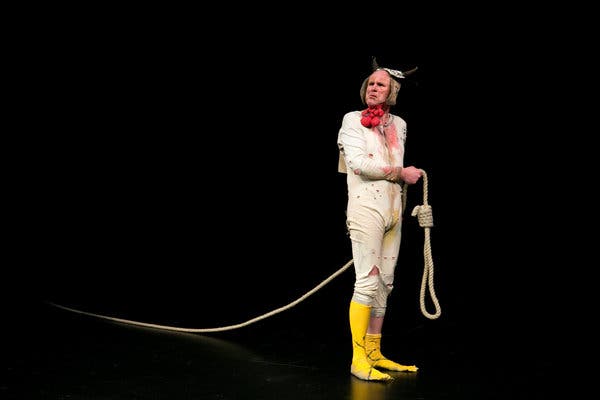 Malvolio seems an apt choice – his character shift foreshadows a host of cross-dressing, mistaken identity, and twists of fate in Twelfth Night. In the original, he is tricked into abandoning his religious principles in order to win the love of Countess Olivia, after receiving a letter ostensibly written in her hand. His sudden transformation is judged particularly harshly and he is savagely locked away, charged with madness.

As a performer, Crouch is magnificent. He revels in laying Malvolio’s judgements on his
teenage audience – admonishing them for letting their hands “slide towards their jewels” and taking aim at the Like!Like!Like! Instagram generation. His oration is also superb. He glides through the difficult text, eliciting laughter and sympathy from his audience at will as he switches between outlandish pomposity and endearing whimpers.

Crouch is more famously known as an explorer of meta-theatre, a style that purposely questions, interrogates or lays bare the form. Within I, Malvolio, these inclinations once again come to the fore. Crouch reminds his audience that they are in Illyria – yet also in Brighton. He intends to play in a liminal space between real and make believe. At one point, he invites two audience members to the stage to assist Malvolio in committing suicide. Reminding the audience that “everyone is involved”, he elicits a countdown towards his fate before pulling away, not wishing to “give them the satisfaction”. But were he to have actually done it? What then?

Squeezing the plot of Twelfth Night into an hour-long, one-man show does not come without problems. Towards the end it began to feel more like a Spark Notes lecture than a play, as the various twists and subplots are explained by Malvolio. None the less, it was an entertaining performance from a magnetic performer.

I, Malvolio tours regularly and can be watched online here.