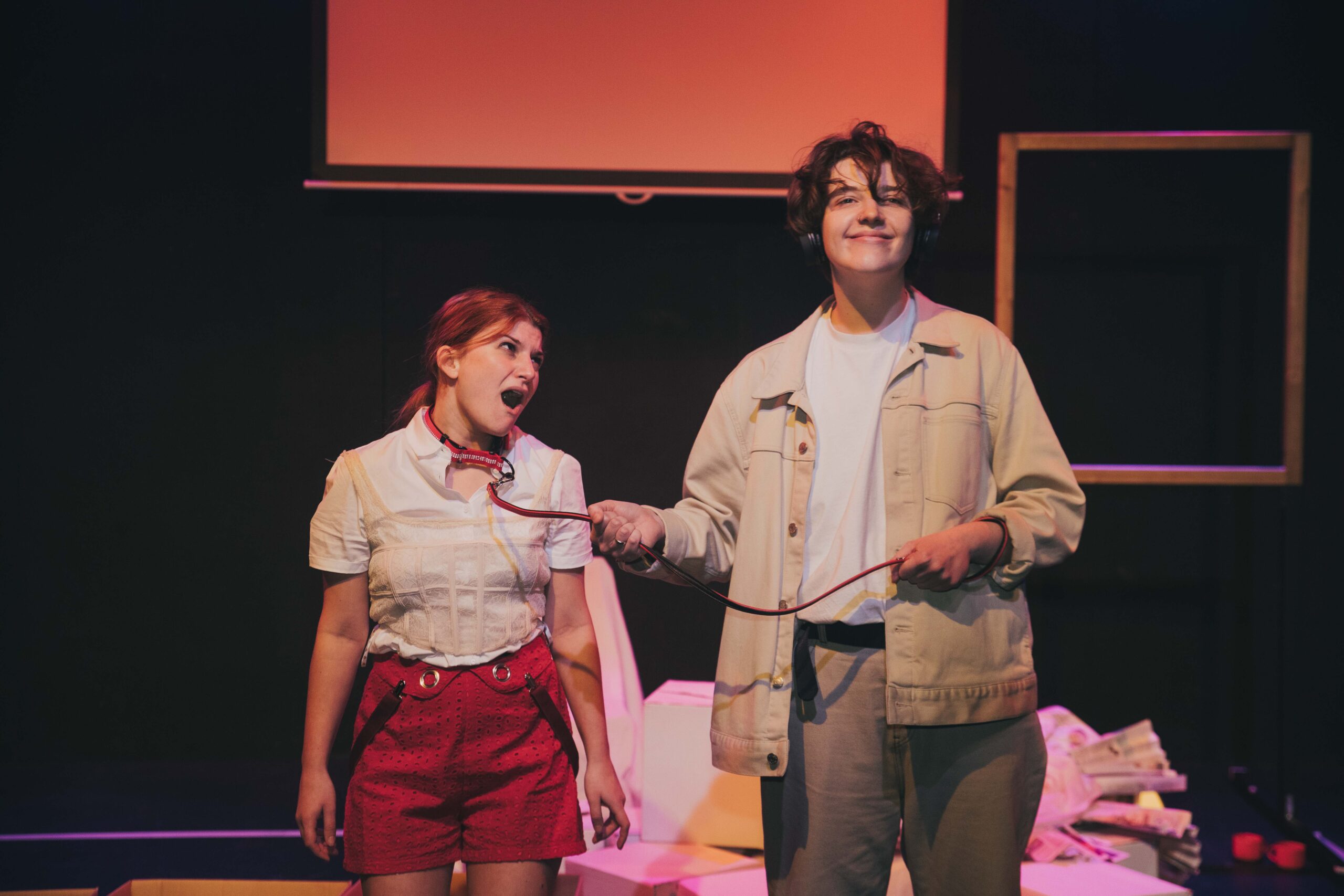 Oakley Flanagan’s debut play is presented in collaboration with OPIA Collective, a company that employs the use of multiple art forms. Indeed, the play starts with the names of the cast, creative and producing teams scrolling on a projector raised above the stage: an opening credits sequence to what could be a take on The Stepford Wives, if the woman in apron, heels and dishwashing gloves demurely walking the literal outline of the playing area (or perhaps, studiously marking her territory?) is anything to go by.

However, Once Oli and Leah enter, we discover that we are very much in the here and now, as they grapple with the prospect of building a queer household in a neighbourhood that seems rather strait-laced and creaky-old. At moments of pointed statements about queerness, trans-identities and the very real struggles of existing in heteronormative spaces, a laugh track plays. Reminiscent of late ’60s fantasy sitcoms I Dream Of Jeannie and Bewitched, the laugh track serves to place this couple’s commitment to each other and their queer household in stark contrast to the legacy of the typical, accepted, beloved household as depicted on TV screens for decades. However, this device fails to cast its intended spell as not only is it introduced too late in the piece, but then is irregularly and inconsistently utilised. The result is canned laughter that disrupts the pace and undercuts rather than elevates the important points the piece is trying to highlight.

The issue of consistency is unfortunately present with the use of the projector as well. It is sporadically employed, rather than effectively utilised to – for example – keep the audience abreast of the story in a particularly clunky transition during which we can only assume time passes (we’re given no verbal or physical clarity of this). We emerge from this moment to find we’ve arrived at the top of a particularly steep absurdity curve, in a place where homeless people come and go with no bearing on the story, pets are inexplicably portrayed in different ways with no reason for the variation, and fairytale sequences and magic mirrors are suddenly slotted in with little narrative progression. It is entirely possible that the projector wasn’t working and failed to depict what Leah was seeing in the mirror – the inhospitable house tripping wires both in the play and in the theatre holding the play. But even so, the issues with the use of these filmic devices are not technical, but dramaturgical. Furthermore, while absurdity is fine and often very effective, it would be most effective in this piece if an internal consistency were established first.

However, these missteps – though distracting – do not entirely detract from what is a truly intriguing script. Sure, some clarity is needed as to whose story this is, as we seem to have watched three mini plays with three different protagonists. But though it suffers from moments of being both overwritten (the builder’s scenes) and underwritten (the Hansel and Gretel scene), there are some wonderfully funny lines and truly tragic truths, and the scene between Leah and the house is a standout in wit, nuance, and charm.

I would love to see this play in its next incarnation. This is an exciting company engaging with urgent and challenging issues that need more space on our stages.

This Queer House runs through 1 March.