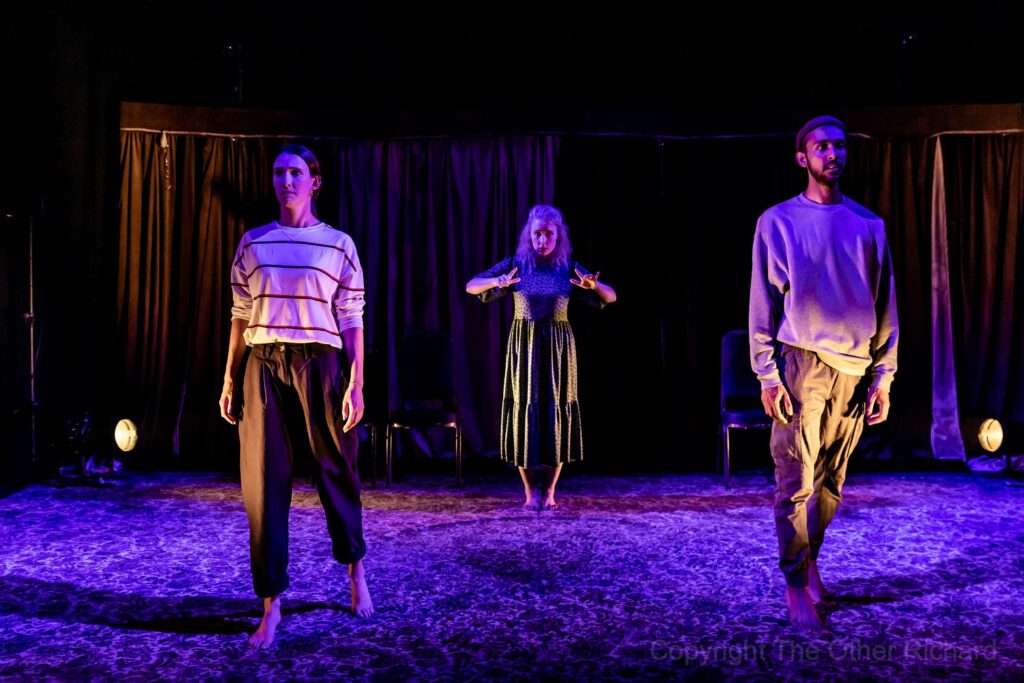 Ella works three jobs whilst trying to forge a career as an actor in London, but misses the slower pace of her hometown of Hebden Bridge. Haseeb is a Muslim factory worker and writer from Cricklewood who is tired of the whiteness in the poetry scene. Though the two meet in a drama workshop that Ella’s, time passes and their love grows. Yet, it’s not enough to compensate for their differences in privilege. This ever-growing elephant in the room becomes harder and harder for the couple to ignore.

Writer Zia Ahmed blends heightened poetry and narration with the casual banter of young Londoners, which Emily Stott and Ragevan Vasan effortlessly embody as Ella and Haseeb. Sometimes they address the audience, sometimes each other, but their delivery is always committed and endowed with a complex mix of feelings. Whether they’re alone in bed, navigating each other’s cultural celebrations with ease or awkwardness, at a house party or on holiday, the pair are completely convincing as a young couple navigating systemic inequality. As heartwarming and immensely watchable as their relationship is, it is constantly threatened by overt racism and microaggressions that Ella struggles to stand up to.

Director Anna Himali Howard smoothly navigates transitions whilst still clearly indicating time’s passing, and gives the actors a clear space and precise staging that is more like dancing than not. Their love is tangible and fills the room, with BSL interpreter Rachael Merry fully integrated into the choreography. Himali Howard’s execution is sharp, dynamic and demonstrates a good sense of pace, despite Ahmed’s clumsy use of extended metaphor and a too-abrupt ending.

Despite these shortcomings in the script, this is an excellent debut play brought flawlessly to life. It speaks to younger and older people navigating an unjust world, and reminds the privileged among us of the constant learning we have to do. In presenting the awful, day-to-day stereotyping and racism that people of colour deal with in the UK, it demands that white people wake up to the awful, internalised attitudes that they inflict on non-white people without thinking and the damage they can cause.

I Wanna Be Yours runs through 18 January in London.

One thought on “I Wanna Be Yours, Bush Theatre”