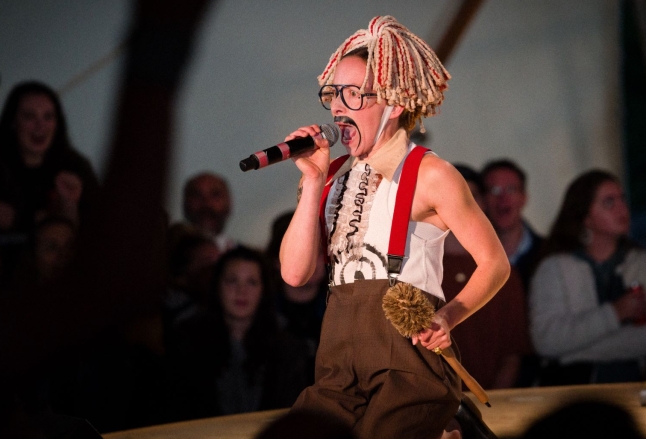 It’s election day in Lovelyville, a place that lives up to its name and is the exact opposite of Britain at the moment. Its citizens are friendly, cheerful and compassionate, and when Nick Dallas is reelected president, things should keep ticking on quietly as usual. Of course, people can’t leave well enough alone and good things never last forever – Mr and Mrs Ubu have just arrived in town with sinister ambitions.

As the couple proceed to wreak havoc on Lovelyville, a live band behind them provides an upbeat soundtrack of contemporary and older pop music. As per the title of the show, audiences are encouraged to sing along and dance; the lyrics are displayed on large captioning screens on three sides of the performance space to help them. With the stalls audience standing and the performers clamouring through the crowd and onto the stage, the staging evokes a gig, a party and a political rally all in one. Some people latch onto the immersive theatre vibe and heckle the actors, who respond with witty banter without losing momentum. The collective energy is generally upbeat; when it’s juxtaposed against the atrocities that unfold in the story, it makes a powerful comment on the flimsy whims of political allegiance. People will so easily, and uncritically, support those who make them feel good. Much of the crowd demonstrates this and as fun as this show is, it’s also deeply unsettling.

Katy Owen as Mr Ubu is a grotesque, nihilistic, and hugely entertaining force to be reckoned with. She is both charming and pathological, a serial killer or dictator unblinkingly focused on total destruction. Mike Shapherd plays Mrs Ubu with a similar, yet smarmier, approach. The pair’s clownishness are a great contrast to the sweetly personable Dom Coyote as Nick Dallas, and his dedicated activist daughter, Bobbi (Kyla Goodey). Completing the ensemble is the skulking Head of Security Captain Shittabrique (Robi Luckay) whose name leads to numerous comedic moments, and the well-meaning host Jeremy Wardle (Niall Ashdown). Together they form an engaging ensemble effectively using Brechtian techniques and audience interaction to tell the story of a place that loses and regains hope with the audiences’ reactions forming a key part of their message. May the UK begin to follow a similar trajectory this week.

Kneehigh’s Ubu!: A Singalong Satire runs through 21 December in London, then tours.