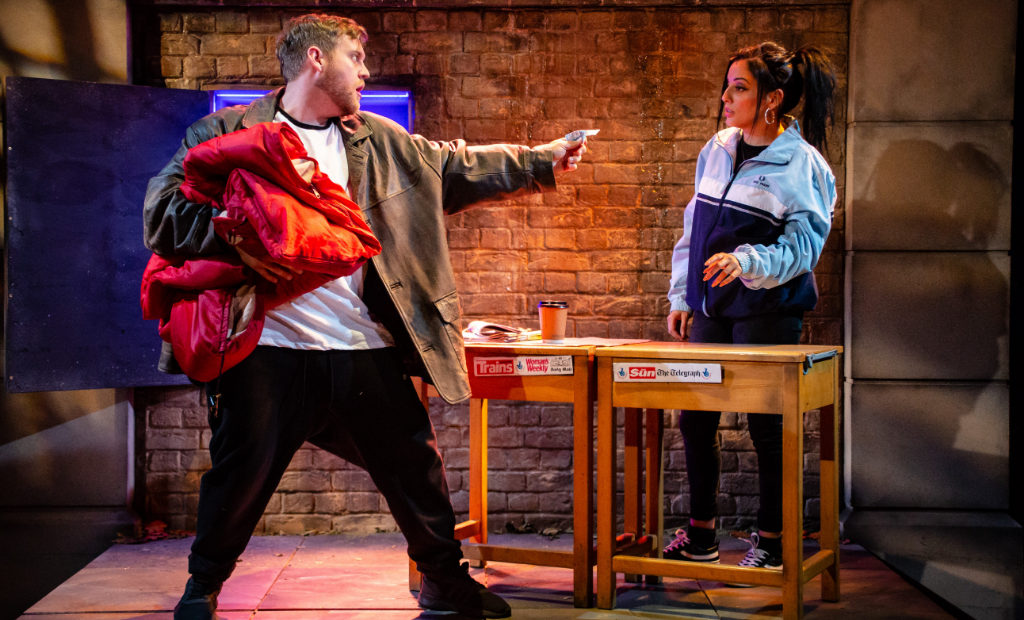 Do you ever think about where your cash goes once it has been handed over to the cashier? How many hands does a five pound note pass through before it gets to you? And what should you do if you see a fiver on the ground? Do you pick it up and keep it for yourself or see if the owner is nearby? These are the questions that Alex James Ellison and Tom Lees, the creators of new musical Fiver explore in their show.

The Busker (Alex James Ellison) opens the show by placing a money pot down and beginning to play. The rest of the cast join him and he offers the pot to the floor, asking if anyone in the audience has a fiver that they might want to donate? A willing participant is brought onstage and serenaded in the hopes that she will give up her fiver to The Busker. Unsurprisingly, the fiver is thrown in the pot and here begins the life of this particular fiver.

First, it’s handed to a homeless man (Dan Buckley) and gives him the lucky day he needs. The fiver then heads to a newsagents, then into a birthday card, into the hands of student as lunch money and many other people and places. The premise is fun and interesting, but the characters and execution let it down.

One of the first people the fiver meets is the homeless man. He is brought a coffee by a friend he has made while sleeping rough (Aoife Clesham) who sits down and has a chat with him. The choice of conversation here though is odd, as his ‘friend’ decides to complain to the homeless man about her problems and how difficult her life is. It appears that the creators were going for a comedic moment with this but all it does is establishes a trend for the show’s ignorant and two-dimensional characters.

There is a running thread throughout too, of a teacher reading letters from one of her students that  eventually reveal a dark and troubling truth about the student’s mental health and behaviour. Again, a lot of this is framed as humorous but comes across in poor taste.

Musically the show is lovely, and the cast are all great performers with strong musicality and vocally very good. Stand out performances come from Hiba Elchikhe and Aoife Clesham, as the pair are able to move between characters and seem to have the most sense of these people are.

However, it is the lack of any real character depth and diversity that lets the show down. Sadly this is another show that is mostly white, only includes cis, heterosexual relationships, and has a script that feels forced and quite cliched, only serving to connect one song to the next. Fiver, sadly feels much more in the past than it should, and for a show that is meant to showcase snapshots of all different people’s lives, lacks any significant diversity at all.

Fiver runs through 20 July in London.

One thought on “Fiver, Southwark Playhouse”