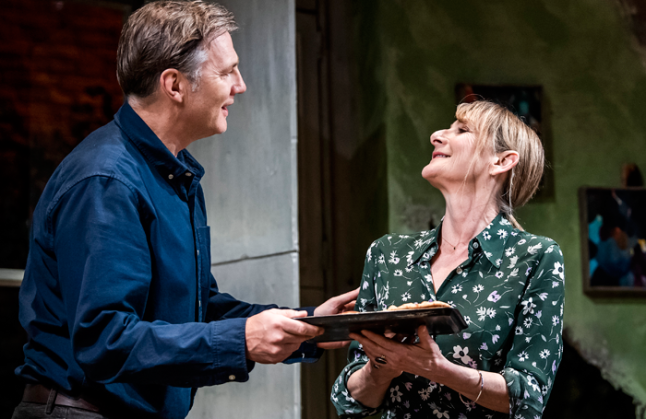 Three unique family gatherings across three decades are marked by three ruined meals. The undercooked rice, untouched takeaway, and burnt lasagne are like a middle finger to the idea of the ‘hearth’, in this epic family drama that struggles to lift off the ground.

It opens with a dazzling performance by Lesley Sharp as Sal: mother, activist, and embarrassing firecracker. When eldest son Carl brings home his ‘posh’ girlfriend Harriet from university, Sal takes aim with her hospitality: “Am I interrogating? Fuck. I thought I was conversing.” Smartly, writer Jack Thorne does not caricature her as a bumbling mother only, but also as a tease, a teacher, and an intellectual. Carl’s exasperated “Mum, stop…” is rebutted by a further avalanche of social awkwardness: “Stop what? Stop talking? If I stop talking, no one will say anything.”

After its opening, the play struggles to reignite until the dick-pics and ‘talks of significance’ in its second act. Director John Tiffany keeps thing coherent with touching montages of time passing between the three decades and tactful use of Grace Smart’s design. Meanwhile Laurie Davidson’s soft performance as troubled son Tom delivers best when up against Kate O’Flynn’s Polly: two siblings who do battle kindly.

So then why does the end of history… fall a bit flat? The play’s vibrant arguments can descend into intellectual shouting matches, while its softer, tender moments, are sometimes filled with dead air. There are problems with pacing and plotting, and a leaner production may have packed more of a punch.

Above all, despite the play’s political themes its structural message feels unclear. Have we lost a sense of left wing radicalism? What have we found in its place? At its heart, this is a story about not wanting the young to grow up like you. About expecting a generation which inherits everything – money, housing, climate, laws, governments – to somehow do better than its benefactors. And then, of course, to argue about what ‘doing better’ actually looks like. We expect a lot from a generation we have routinely let down, but don’t we always? What has changed? (A lot, I expect, but the end of history… won’t give us the answers).

There is still much to celebrate. Thorne’s dialogue comes alive when you least expect it (“I’m going to the toilet. It’s an apolitical act.”) and a talented cast deliver on the play’s emotional crescendos. It’s not undercooked, untouched, or burnt. The ingredients are all there, but the recipe could do with some work.

the end of history… runs through 10 August in London.