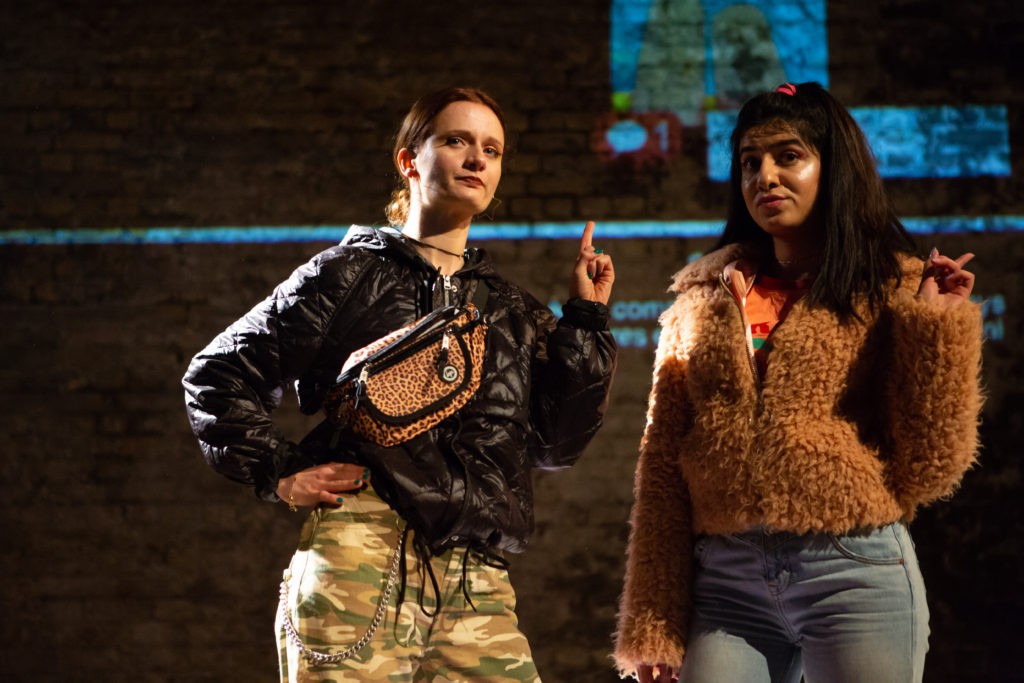 Ah, how it felt to be just 17… Given the chance would you do it again? How about with the technology we have now? Social media offers us tools to connect – but these are also tools of destruction.

Yasmin and Casey are best friends, in the ‘love-you-one-minute/want to scream-in-your-face the next’ kind of a way that only best friends can be. Balancing books and boys is a tricky maneuver they think they’ve got down, until Jasmine appears on every platform available – without her knowledge or consent. The two teenage girls discover what it feels like to have their reputation, life and what feels like their future taken out of their hands by the power of social media. They find the lure of what’s trending balances precariously with the desire to fit in.

Following the debut and subsequent tour of Electrolyte at Edinburgh 2018, a “loud, liberating” (The Stage) piece of gig theatre exploring psychosis in young people, and returning to Vaults after wickedly funny play The Cat’s Mother, young company Wildcard have garnered a reputation for making bold new work with a young focus. 17 does not disappoint in this regard. Its confessional tone is threaded with beat poetry set to tracks and there’s even a rap – although the cavernous walls of Vaults unfortunately eat some of the words.

Emma James delivers a catty, eye-rolling picture of teenage rebellion, thinly veiled insecurity simmering convincingly away underneath her crocodile tears and behind the UV eye shadow, eyelash glue and (classic) fishnet socks. Why teens are still wearing them remains a mystery, but there you are. The hopeful doe eyes of Annice Boparai as Yasmin are enough to break your heart as she gazes fixatedly on (unnamed) Boy, also played by Emma James with a hoodie and a swagger. When the doe eyes turn to those of a rabbit’s in the headlights, her face contorts to capture the sickening shock that comes over her like a slow, drawn-out spilling of her guts.

A timeline of events is played out on the back wall through social media posts that spell out the girls’ pressures and priorities quite clearly. The cartoons used in place of photos heighten their sense of detachment from their real lives. To Yasmin, it’s a numbers game – a sad reality that we can most of us relate to on some level. Watching it play out and take hold of these impressionable young minds makes this a tough watch. We may not be 17 anymore, but do we really know any better?

Frankie Meredith’s writing plays out like a stream of consciousness, spilled from the mind of someone who’s been there – “We’ve all done it, been through it, but we easily forget”. It’s the relatability and nostalgia that really warm us to her voice (who knew I could so easily forget the perks of being a September born at that age, for example). A lot of time is dedicated to contextualising the lives of these girls, which whilst nostalgic and funny, leaves less time to dig into how Jasmine takes her life back in the wake of going viral against her will. As this feels like a cautionary tale for the internet age, more time spent there would no doubt be not only interesting to see, but potentially useful for the young audiences this play will go on to attract. The opportunity to really dig deep on the pertinent issue of consent is also largely passed over. Another play for another time, perhaps, but there’s a disappointing lack of fuss made about the police’s failure to take her seriously.

There is however, naturally, a positive to not focusing on the negative. Focus is instead placed on how the situation can be turned around in the girls’ favour, how instead of ‘breaking the internet’ perhaps they can win it over – they can be part of the movement to ‘fix’ it.