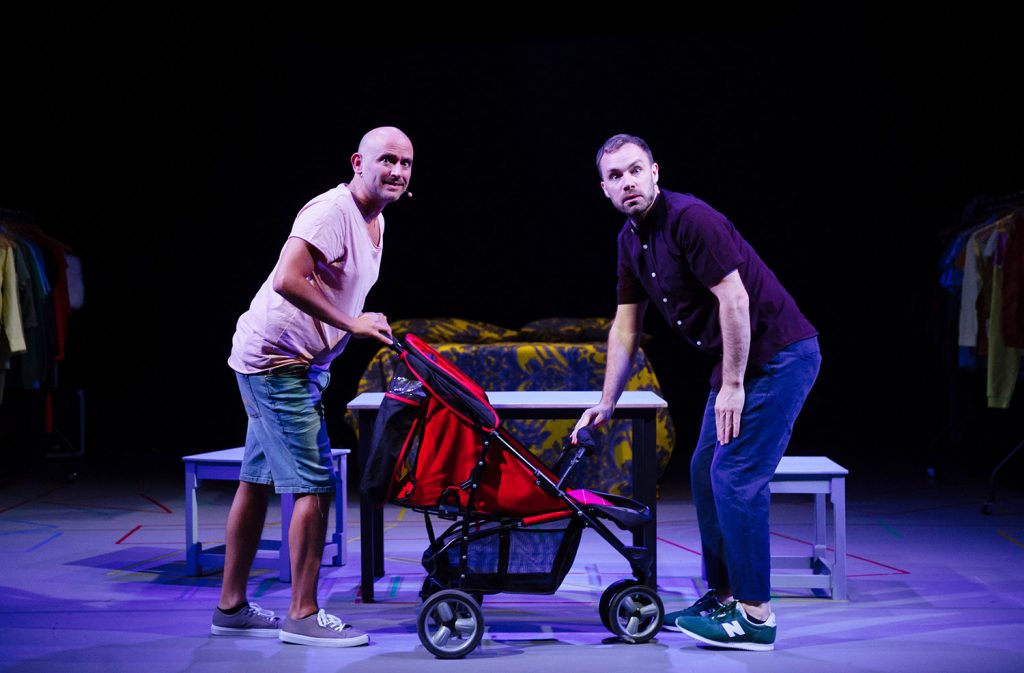 George Mann and Nir Paldi founded Theatre Ad Infinitum over a decade ago and have toured the world with their socio-political devised work since. From sci-fi dystopias to Mexican factories, their searing productions draw on physical theatre and international performance to create distinctive shows with powerful commentary.

This time, they’re looking inwards. Mann and Paldi are a couple that have been together for about as long as they’ve had their company. Whilst a theatre company often feels like the founders’ child, they are deciding whether or not to start a family. So like typical theatremakers, the socially conscious pair decided to make a show, about making a show, about their decision process.

Their introduction tells us this is the first time they are making a piece together. Historically, they take on different creative roles within a production and we’re quick to see why – they bicker and argue about process and approaches in a way that only long-term couples would. Over the course of the show, they periodically step out of the scenes to meta-theatrically touch base with each other. This shift in tone disrupts the emotional connection with the work, but serves as light relief to the weighty material and is an effective, Brechtian dramaturgical device.

Choosing whether or not to have children is an emotive subject to those in their 20s and 30s who are liberal, socially aware and likely to be financially precarious. The planet’s  overpopulated and polluted, and many people of child-rearing age are unable to give their offspring the stability and opportunity they had growing up. We’re less likely to own homes or have salaried jobs, and everything costs more than it did for our parents. Plus, look at the bloody state of the world. Yet, instinct is a powerful thing – so are family and social pressures to grow up and have it all.

For Mann and Paldi, they have the additional consideration that as a gay couple, it’s not so straightforward. But they have options. They could adopt or find a surrogate, use a friend’s eggs or donor eggs, or…not have kids at all. Like a theatrical Sliding Doors, they mull over these options and their outcomes. Their son could be an Oxford scholar, or an abuser (or both). Their child might be bullied, or become a bully. The strain of parenthood could drive them apart, or bring them closer than ever. Or, they can walk around the house naked and go out for dinner whenever they want.

The highs and lows are often extreme but convincing, and everyone who has heard horror stories about difficult children and seen their friends’ supposedly perfect lives splashed across social media will understand the worries and fantasies unfolding. Though there’s little shown of the mundane, soul-crushing tiredness and repetition that comes with parenthood, it’s wisely left out. Endless nappy explosions, feedings and sleepless nights don’t make good theatre and everyone knows about those parts of parenting, anyway.

The push and pull of the dilemma cleverly seeps into the show’s structure, with movement and dance sequences capturing extreme highs and lows. Though more of these would be welcome considering Paldi and Mann’s extraordinary physical skills, this intimate, personal production is an accurate and emotionally charged snapshot of the pervasive conflict between capitalism and the desire for a family.

No Kids runs through 27 August.